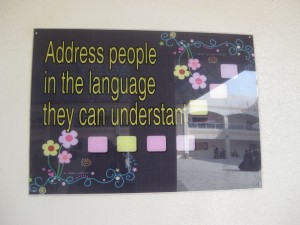 Ong explains that oral cultures and literate cultures are completely opposed so an individual is either part of an oral culture or a literate culture and that if one were to shift from one culture to the next they would be, “ leaving behind much that is exciting and deeply loved in the earlier oral world.” (Chapter, 4)
Ong explains that oral cultures need alternate means besides writing to pass on knowledge through generations. Ong describes that oral cultures have certain qualities that have developed over time and that ensure that knowledge can be maintained and recalled. (Chapter 3).
In my opinion Ong takes on the ethnocentric view that historically moving from sound to sight has transformed the “intellectual ascendancy over ancient cultures.” Further to this Ong feels that technology changes the consciousness of literate people so that their view of the world becomes more abstract and organized, and this allows for the shift to logic and reason, democracy, structured thought, modern science and seemingly, most other defining characteristics of Western civilization. Ong’s thoughts about the ‘ascendancy’ of Greek culture over others as a result of the development of writing is yet another example of this western ethnocentric thought.
I don’t believe that written word makes one superior to the non-literate learner – I think the best approach to learning to a mix of the aural-oral and writing cultures depending on the context.

Orality and Literacy in Relation to the Literate and Non-literate Learner
I will discuss Ong’s view of oral cultures along with other critics of Ong’s work (Scribner and Cole, 1981; Chandler, 1994). I will relate this to the oral culture in which I am presently working in the Middle Eastern region of the Emirate of Abu Dhabi.
Ong explains, “in an oral culture, restriction of words to sound determines not only modes of expression but also thought processes” (Ong, 2002, p. 33).
Teaching in a high context Arabic culture one can notice the differences between the Western ideas of activity and accomplishments in contrast to the Arabic where the focus is on the state of being. This is evident in a simple example, when we ask in Arabic “how are you?” and the reply is referring to one’s emotional state “al-humdullila”- meaning thank god for his blessings and everything is okay.
I believe that the thought processes are not that different but the culture influences the response and communication. As Daniel Chandler writes in his essay “Biases of the Ear and Eye”
“…all human beings are capable of rationality, logic, generalization, abstraction, theorizing, intentionality, casual thinking, classification, explanation and originality. All of these qualities can be found in oral as well as literate cultures.” (Chandler, 1994).
Presently, in our schools there is a focus on the shift from orality to writing but there is no clear dichotomy between oral and literate cultures in our teaching practices. The oldest Arabic stories contain “rationality, logic, generalization, abstraction, theorizing, intentionality, casual thinking, classification, explanation and originality” qualities that Ong attributes solely to written cultures. Some famous examples of this can be found in philosophical literature, romantic literature and in stories such as “Quays and Lubna”, “Kuthair and Azza”, also poetic works dating back to the seventh century like “Layla and Manjun.” Arabic literature retained its importance in politics until the Ottoman Empire where the writing them became more religion based. Modern Arabic writers (ex. Khalil Gibran) encompass those qualities that Chandler (1994) proposes exist in both oral and writing cultures. I agree that the shift to written technology has played a big role in changing and re shaping society but from my perspective the traits of Ong’s oral cultures overlap with those of writing cultures. As a Western educator that is now working daily within an oral culture I am able to appreciate and find value in some of Ong’s distinctions between non-literate (oral) and literate cultures. In most teaching situations I can find overlap between the two. For example, as Ong mentions in memorizing a poem an individual from an oral society does not need to look back to written text and they can memorize spoken information quickly.

Shaping Practices in Teaching
In teaching children with a strong set of attributes of oral-aural culture I can appreciate Ong’s characterization of the two types of culture.
As Ong clearly explains in Chapter 4, literate societies favor evidence. Ong explains that writing distances the receiver from the originator of a thought. Writing “ which cannot be directly questioned or contested as oral speech can be because written discourse is detached from the writer (78).” This is a shift that we are trying to embrace to improve our teaching practices. As Ong explains the print or literate dominate society roles more on the factual accuracy of a message than its emotional resonance (Ong, 2002). In the oral culture in which I teach a single anecdote or proverb can embody the beliefs and ideals of the entire community. Here in the UAE- the culture is based on Islam. The students can recite versus from the Holy book – the Koran without having to refer to any texts. The culture is also based on the ideas of the visionary leader the late Sheikh AL- Nahyan. Many of the proverbs are posted around the school as a reminder of this. Keeping in mind the attributes that embrace the oral-aural and writing cultures we focus our teaching practice on putting meaning and details in context and taking the best from both cultures. We do this by providing engaging whole experiences through dialogue, repetition, writing, vocab practice, writing, critical thinking and learning through creative activities like storytelling. We try to engage our student audience using parallelism, exaggeration, humor, vocab and phonological elaboration.
In conclusion, while I think that Ong is sometimes ethnocentric in his ideas about oral-aural and literate cultures I do see some of Ong’s characteristics of cultures as having some merit and also worth reflecting on in teaching practice. The two cultures have qualities that need to be used together to help in creating a holistic , well developed and useful curriculum.

Ong, Walter. (2002). Orality and Literacy: The Technologizing of the word. London: Methuen.