World Web and Networking: Laying the Foundation
By Laura Bonnor, ETEC 540
New technology such as the World Wide Web and Social Networking have made dramatic changes within our society over the past few years, however I would posit that the seeds for our acceptance and willingness to embrace these technologies were sown thousands of years ago. Indeed, the web of roads and communication routes that were established by the Romans allowed the monastic orders, in particular the Benedictines, to develop their own social network to further the cause of Christianity and in so doing facilitated the development of the codex, the printing press, and laid the groundwork for the information highway that we so value today. Bolter refers to this evolution as “remediation”. (Bolter, 2009) Technological change does not arise or exist in a vacuum. Unique sets of social and economic conditions combine to form the catalyst and impetus that allows the technology to evolve. When Gutenberg finally succeeded in designing a printing press that was capable of reproducing books en masse, it was not solely due to his own genius but rather the culmination of a great many circumstances of a political, social and technological nature. In this paper I will examine a few of these to demonstrate the complex nature of how technological change occurs. Although one could unravel the connecting threads that lead inexorably to the design and development of the printing press ad infinitum, I will begin in the year 313 A.D. 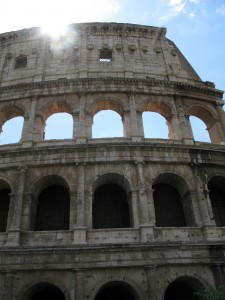 Emperor Constantine was the first Christian Emperor of Rome and was instrumental in Christianity becoming the official religion of the Roman Empire. (Nelson, 1999) Christianity quickly spread along the Roman byways that had already been laid out by centuries of successful Roman invasions and conquests, intermingling with and sometimes replacing altogether the pagan beliefs of the conquered citizens. (Nelson, 1999) It was at this time that the codex was gaining popularity as a more convenient and effective tool for delivering the Christian message. (Grout, 2002) The format was both portable and facilitated the teaching and learning of the biblical lessons much better than could be achieved by scrolls. (Clement, 1997) So when Rome was sacked in 410 and then eventually overrun by Germanic tribes, the tentacles of Christianity, painstakingly copied and distributed throughout Europe, became even more influential and pervasive. The Church remained a significant religious power but was not affiliated with any particular crown. In fact with the disintegration of one central Roman power, the Christian Church, still based on the Roman principles, became the one unifying force in Europe.
Christians attempted to rediscover their roots, to turn away from the decadence that had become Rome and to pursue more pure religious ideals, following in Jesus’ footsteps. (Nelson, 1999) Many became hermits, but Benedict of Narsia, himself of noble Roman heritage (Reinhart, 1977), founded a new order in the 5th century at Monte Casino. He developed The Rule for the order, based loosely on the Roman notion of justice and service. It was open to all, and although the Abbott was the leader of the order, each member, including the Abbott, had to follow the rule. At the same time, Pope Gregory was keen to encourage the monks to simplify their language so that the Christian teachings would be more accessible to the common man. Both the limiting of the power of the Abbot and the improved accessibility of the texts laid the foundation for future democratic reform that would become the driving force of the late Renaissance. In contrast, monasteries that developed after the fall of Rome in England and Ireland, especially the monastery of Lindisfarne, where the Lindisfarne Gospels where created, had no such rule and based their structure on the clan system (Knowles, 1950). In both cases, the Benedictines working their way North and West, and the monks of the British Isles working their way South and East, travelled and proselytized throughout Europe, transporting their message and the Rule with them in the form of books. In addition to copying the gospels, the monks as well as Roman noblemen, especially Cassiodorus, copied the ancient texts of Rome and Greece, realizing that the knowledge of antiquity could be lost in the state of turmoil. The monks perpetuated Greek and Latin knowledge and Roman ways of living and learning. So while Rome itself fell, Roman culture, with the help of Christian monasteries, continued to have a great influence on society. 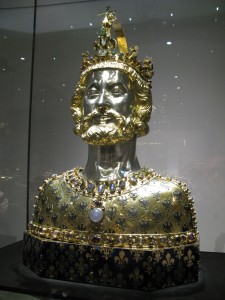 During this time monasteries flourished. The fact that many patrons of the church felt that giving money and land to the monasteries was a sure way to get into heaven also aided their cause, as did the growing exchange of information with other cultures. Essentially a massive European social network founded on the Christian faith flourished, and within that network, the continued development of the book. In year 800 A.D. Charlemagne was declared to be the Holy Roman Emperor by Pope Leo III (Gelfand, 2003). The Carolingian Renaissance, built on Christian faith and Roman values, linked with increased literacy, which further contributed to book development. Charlemagne entreats the monasteries to improve the quality of the copies, through improved vigilance and editing. (Innes, 1998) Charlemagne calls on not only the clergy to become literate, but the “free sons and children too”. (McKitterick, 2009) He introduces punctuation and spaces between words so that others may read and interpret the works. Carolingian Minisucle (Gelfand, 2003), a smaller clearer font, is used to improve readability. While Charlemagne perpetuates the Roman habit of using Latin as the language of learning, in England King Alfred is translating text into Old English. (McKitterick, 2009) All of this serves to increase the access to books and literacy, not just among the clergy but among lay people who are now acting as scribes and notaries. (Knowles, 1950)
At the beginning of the 11th century, the Crusades usher in another chapter in the development of the book. Increased travel and trade resulted in an exchange of technology such as improved paper production as well as a variety of new technological and scientific information that was previously known only in the east. (Bolter, 2009) Techniques of travel, meteorology, the use of a compass all contribute to increased interest in science. At the same time, the Church is thrown into upheaval while secular kings vie for control and power. Monasteries where becoming far too rich and decadent. Universities were springing up all over Europe and power was shifting away from the traditional church and into the hands of rich merchants and city states. (Mundy, 1973) In fact, in “Germany centers of scribing and learning were one and the same”. (McKitterick, 2009)
The stage is set for Gutenberg. Christian and Roman ideals had spread throughout Europe. Power had shifted from entrenched monarchies and rich monasteries into the hands of city-dwelling merchants with a thirst for knowledge. Paper had become lighter and more uniform. Within this climate Gutenberg comes up with the idea of individual letters on moveable tiles that can be arranged to reproduce pages, but he alone cannot bring the project to fruition. Again, the network of power and money, now held by the German burghers, plays a key role. One rich family of merchants and bankers, the Fusts, step in to finance Gutenberg’s project. Johan Fust loans the money to Gutenberg, himself in debt at the time, so that he can complete the project. We also learn that Gutenberg had an excellent crew of skilled craftsmen, including Peter Schoeffer, who made the project possible. (Winship, 1926) The fact that skilled and literate labour was available to Gutenberg is in itself a testament to the long tradition of literacy and education which was the legacy of Rome, the web of transportation that the Romans had built and the network of communication established by the monks.
Great moments where technology seems to change the face of society are not really surprises so much as they are the inevitable result of combined social, economic and cultural changes that give rise to the need and the market where that technology can exist and flourish. In this sense the technology is not the determining factor and does not play a deterministic role in the society because the society was already driving towards it; the technology merely fits in to the niche that has been created. The Roman success which precipitated the vast network of communication and exchange, which became even more significant after the decline of Rome, provided the climate for the eventual creation of the printing press. Could it have been otherwise? Gutenberg had the idea but it was the social conditions in Mainz that allowed that idea to come to fruition. It was a bourgeois banker whose family had risen up from the merchant class and skilled workers who desired to read and clergy who wanted to reform the monasteries that created the centrifuge to create the press. It may be true of all technology. Technology does not suddenly appear out of thin air but it grows from seeds that happen to fall on fertile soil and through care and patience, and perhaps a certain amount of serendipity, bloom. Although we look at technology as something that springs up quickly, especially nowadays, we would do well to look back into the long history of the development, the links to our past history and social and economic realities that lead to it. Rome was not built in a day.