Paradox and Tension in Theories of Orality, Text and Technology

Paradox is defined as contradiction or conflict with statements that are reasonable or possible. (Merriam Webster Dictionary)  Theories surrounding the nature of orality, text and technology is rife with paradox. It is through illuminating paradox that we become comfortable with the tension it creates. Paradoxical positions in how orality, text and technology are seen to relate to the human need for relationship and communication. Opposing viewpoints provide tension and opportunity to see and hear the issues from both sides of the ‘same coin’. Tensions exist in theories of how we relate to self, others, the world and the technologies we use.  Human relationship and communications are situated within social and cultural contexts. 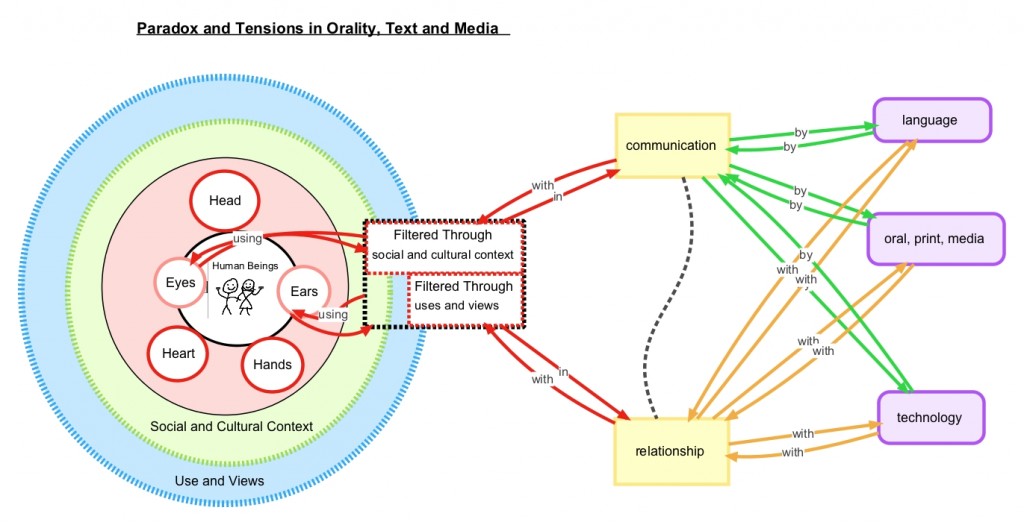 Here is a visual representation of paradoxes found in the readings on orality, text and technology. Humans interact through visual and aural senses. Interactions are influenced by and connected to the head (thinking), heart (feelings and emotions) and hands (actions). The socio-cultural context filters and shapes human thought and expression. Views and uses also filter the external elements of relationship and communication from the internal human being. There is a reciprocal movement in the forms of communication and relationship to the elements of language, orality/ print/ media and technology.

Chandler, in his article Biases of the Ear and Eye, proposed that theories comparing modes of communication frequently refer to a paradox in experience and forms of society. The division is seen as a choice between ‘either/or’. I propose that it is the same thing viewed from opposite sides of the coin. Chandler outlined the elemental differences between the ‘Great Divide’ theories, as represented by Ong’s work, and the ‘Continuity’ theories that propose dynamic interactions between orality and literacy. (Chandler, p.2)  Although a distinct division between oral and text-based language and thinking is difficult to determine, differences do exist.

Ong (1982) outlined characteristics of oral thought and expression.  He related that, in a primary oral culture, thought and expression are based in sound, additive, aggregative, redundant, close to the human lifeworld, agonistic, empathic, participatory, homeostatic, situational, harmonizing and conservative. (Ong, p.37-49) In comparison, writing and text creates thought and expression described as being visual, mechanical, unresponsive, destructive of memory, dissecting, interiorized sound, objective, analytic, abstract, isolating, not grounded in the lifeworld or actions, and forming new ways of knowing. (Ong, p. 37-49) Ong proposed a visibly distinct separation between the two forms of thought and expression demarked by the onset of writing as a primary form of communication. This position is juxtaposed with Continuity theories. (Chandler, p.2)

Chandler details Continuity theory as a “continuum rather than a radical discontinuity between oral and literate modes”. (p. 2) The interrelationships of media, self and social context creates the nuances seen within thought and expression. The technical features of text determine the forms that thought and expression take. These forms include visual, recorded, technological, branchable, external and autonomous. (p. 6) This illustrates that the paradox inherent in this ‘thought and expression’ coin is the flip side of the same thing. Surrounding the divide vs. continuum sides of this coin is the relationship and impact of the lifeworld and socio-cultural context.

Another paradox illuminates interiorization as compared to exteriorization of thought and expression. Both Postman and Ong outline this in writings. “Deeply embedded habits of thought” (Postman, p. 12) are changed by the technology being used (writing, computers). In Postman’s example, Thamus sounds a warning that writers “will come to rely on external signs instead of their own internal resources” (Postman, p. 12). This is reflected in the statement “language is not merely a vehicle of thought but also the driver”. The paradox is that language and thought are both interior and exterior of the mind. Ong postulated that concepts of interiority and exteriority are “existentially grounded concepts based on experiences of one’s own body ….. both inside me …. and outside me.” (Ong 1982, p.72) With thought and expression being exteriorized through the use of technology Ong determined that “technology, properly interiorized’ does not degrade human life but … enhances it.” (p. 82) This highlights the paradox of thought and expression as being shaped by the internal and external, as well as surrounded by the relationships within and outside the self.

Paradox is outlined in the diverse yet connected views that technology is shaping us and that we are shaping technology. Postman presented the notion that new technologies alter structures and characteristics of thinking. They change the way we think about and think with symbols. (Postman, p. 20) These changes impact our relationship and communication with others. Chandler outlined that within technological affordances there is an “ecology of processes of mediation …. in which we both use a medium and can be subtly influenced by our use of it.” (Chandler, p. 6) Ong determined that “writing has transformed human consciousness.” (p. 77) The paradox inherent in this ‘shape and be shaped’ discourse is that “new technology is not merely used to convey the critique: in fact it brought the critique into existence” (Ong 1982, p. 79) Hence this paradox illuminates the reciprocal interactions with language, text and technology and brings to light the critical importance of our context, views and uses.

Paradox exists in our understanding of orality, text and technology when viewing the discordant positions of division vs. continuity, interiority vs. exteriority, and shaping vs. being shaped, as they relate to human communication and relationships. Clarity and comfort can come from living in these tensions when we see and hear differing viewpoints of the same ideas.