From Scroll to Codex 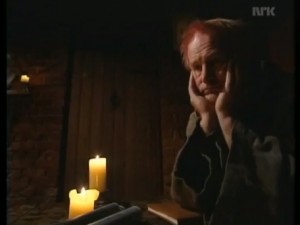 I laughed such a deep belly laugh that my sides hurt when it was finished. That was my reaction to the video Medieval Help Desk (Medieval Help Desk, 2007). The similarities between the monk helping his colleague and my job helping colleagues integrate technology into their teaching were undeniable. The encouragement, the patience, the modelling and the scaffolding of learning are all strategies that I use in my practice. Once I finished laughing, I began to reflect on the video and think about the real life transition between the scroll and codex.

I never really thought of that transition as a change in technology. I was born after both the scroll and codex were already old technology. As Prensky in his article Digital Natives, Digital immigrant states, “Kids born into any new culture learn the new language easily, and forcefully resist using the old” (Prensky, 2001). I grew up using mass printed books and never thought there was anything else. I never had to master reading a scroll or a codex. But the more I reflected the more I came to the realization that the change in technology from scroll to codex was a significant change in the way that humans interact with text.

I then began to ask questions. What really is a scroll? What are the characteristics that constitute a scroll? How was it made? How did the scroll change over time? What is a codex? What are the characteristics that constitute a codex? How are they made? How did the codex change over time? What event precipitated the change in technology from scroll to codex? How long did the two technologies exist simultaneously? Was it a short transition of a few years or was it a long transition over centuries? I set out to find the answers.

What is a scroll?

In its simplest form a scroll is a roll of materials used for writing. Although we associate the word scroll with roll, the original is actually derived from the verb scrow and its meaning to write down or inscribe (Agarwal-Hollands & Andrews, 2001).

What are the characteristics of a scroll?

The materials used for scrolls varied from culture to culture throughout the millennia. They included materials such as papyrus, parchment, paper, birch bark, palm leaves and fabric.  Evidence of the earliest scrolls is found in the ancient cultures of China, Japan and Egypt. The scrolls in China and Japan were made from silk fabric and Egyptian scrolls were made from papyrus. Greek and Roman scrolls used parchment in addition to papyrus (Vega, 2011b; Argawal-Hollands & Andrews, 2001).

Many scrolls were wound around rods of bronze, ivory or wood and frequently the rods were decorated at both ends with knobs or ornaments. These rods and knobs were meant to protect the scroll and make them easier to handle (Vega, 2011b). Other accessories contributed to the safe keeping of scrolls. There is evidence that to keep scrolls safe they were sometimes stored horizontally on shelving or in pigeonholes on shelves. Some were stored in upright book-boxes or capsa. There is also evidence that valuable scrolls could be wrapped in a protective sleeve of parchment tied with thongs or placed in a chest (Grout, 2011).

The writing on the scroll again varies from culture to culture. Egyptians used narrow columns of text for horizontal scrolling. Hebrew and Arabic scrolls were read from right to left. In Japan and China the text was written in vertical columns from the top right to the bottom (Argawal-Hollands & Andrews, 2001).

How did the scroll change over time?

The earliest Egyptian, Roman and Greek scrolls were made from papyrus. Papyrus was made from a tall reed like plant that grew exclusively in the swamps of the Nile River. After removing the hard rind, the reed was cut into long strips. These strips were then pressed together into sheets and then pasted together to form scrolls (Vega, 2011b).

Over time parchment scrolls replaced papyrus scrolls. Parchment was made from cleaned, scraped and prepared skins of calves, goats, or sheep (Vega, 2011a). As Roberts and Skeat assert, ”parchment had the advantage over papyrus (in) that it could be manufactured virtually anywhere” (p. 8) However, this change took centuries to complete. (Roberts & Skeat, 1983, p.10)

What is a codex?

The codex can be defined as, “a collection of sheets of any material, folded double and fastened together at the back or spine, and usually protected by covers.” (Roberts & Skeat, p. 1)

What are the characteristics of a codex?

The original materials used for codices were papyrus and parchment. Roberts and Skeat suggest that the papyrus codex and the parchment codex developed at the same time (Roberts & Skeat, 1982, p.29). As discussed earlier, parchment replaced papyrus over a period of hundreds of years. The gigantic scale of the manufacture and distribution of papyrus from Egypt made its replacement a formidable undertaking. (Roberts & Skeat, 1983, p.10)

The physical layout of the codex is directly related to the earlier wooden writing tablet (Roberts & Skeat, 1983, p. 1). The wooden writing tablet was two or more pieces of wood covered in wax and was held together with a clasp or cords threaded through pierced holes (Roberts & Skeat, 1983, p.11). The Greeks and Romans would use an instrument called a stylus to write on the wax tablets. The stylus would have a sharp pointed end for writing and a flat rounded end for smoothing the wax (Vega, 2011a).

A significant characteristic of the codex is that it could be opened at any page due to the bound pages. The reader would be free from winding and rewinding. (Ellenbogen, 2011)

How did the codex change over time?

The codex form of the fourth century of the Common Era remained unaltered for more than a thousand years until the developments of paper and movable type (Roberts and Skeats, 1983, p.76).

However, the priests and monks of the Christian Church developed the skills of writing and bookmaking during that millennium. They separated the words with spaces and developed a system of punctuation to make reading easier. They also developed the use of illustrations, framed decorative borders and decorated initial letters (Ellenbogen, 2011; Vega, 2011a).

How long did the two technologies exist simultaneously?

The two technologies, the scroll and the codex, existed simultaneously over the first five centuries of the Common Era. The scroll was the dominant technology for the first and second centuries. It was not until the third century that the scroll and codex achieved parity. By the sixth century the codex was the dominant technology. (Roberts and Skeat, 1983) “This was no sudden revolution but a slow, irreversible drift from one form to the other which required several centuries for completion.” (Roberts & Skeat, p. 67)

What events or event precipitated the change in technology from scroll to codex?

Roberts and Skeat explore this topic in their book The Birth of the Codex and they discuss and discount multiple hypotheses, “the questions why this change took place when it did, in what circles the codex was first used, and why it eventually supplanted the roll, are more complex and uncertain.” (Roberts & Skeat, p. 1)

One reason scholars suggest that codex overtook the roll is due to economy. Roberts and Skeat discount this idea by suggesting that, “if economy was such a decisive factor, one would expect to find some traces of other attempts to make economical use of the writing material; but such traces are conspicuous in their absence.”(p. 46)

Another reason scholars suggest the codex overtook the roll is due to compactness. Roberts and Skeat assert that this is a “serious and valid argument” (p.47).

Roberts and Skeat discuss a hypothesis for the adoption of the codex. This hypothesis is that Christians wanted to differentiate Christian texts from both Jewish and pagan writings. (p.57)

Finally, Roberts and Skeat do offer two further ideas for consideration. The first idea is that the capacity of the codex is superior to that of the scroll (p.76). This sentiment is echoed by Bolter, “A codex could hold several times as much text as a roll” (p. 78).  The second idea is that the superior construction of the codex, the binding, made it less susceptible to damage (Roberts & Skeat, 1983, p.76). However, they do state that these are only speculations.

1 Response to From Scroll to Codex