In October of last year, the UN warned–ominously–of a new global food crisis threatening to hit sometime in 2013. Food stocks have been dwindling.

Apparently, 2012’s record heatwaves and droughts brought crop reserves down to historic lows. While those of us in the global North are largely insulated from the vagaries of these fluctuations, at least 870 million people in the global South remain chronically malnourished, while grain supplies in the politically volatile Middle East and North Africa are precariously diminished.

Click here to jump to our video interview with Dr. Navin Ramankutty, McGill University’s Tier II Canada Research Chair in Land Use and Global Environmental Change. Or keep reading, below.

Given current trends, the picture seems unlikely to get any rosier, with no less than 2 billion people projected to suffer from malnourishment by 2050, at which point the planet will be home to 9-10 billion people.

Drawing on historical French maize data, Hawkins et al. find that for every day with temperatures over 32◦C, there have been serious reductions in crop yield. They infer that the only way to mitigate potentially catastrophic shortfalls in coming, hotter years is to somehow boost European yields by no less than 12%, ostensibly through some yet-to-be developed technology.

But while developed nations innovate ways to boost their heavily subsidized, irrigation-and-fertilizer buoyed yields even higher, countries in the South still struggle to achieve even subsistence levels of productivity. And these processes are often directly linked. In the news just this month: Sources of waste in the global food system, via FAO (2011). (Click to enlarge)

As if to add insult to injury, recent data have emerged suggesting that up to one half of all food is wasted, globally. (Yes, one half.)

In the South, much of this waste is the fault of insufficient infrastructure. In the North, it’s mostly driven by wasteful consumption practices (read: buying more than you can eat, supermarkets rejecting ‘ugly’ produce, buffets, etc.).

Merely reducing such wastage could, apparently, boost food production by 60%-100% (check out this article for some innovative ideas on how we can do it).

In the midst of the jarring geographical contrast between the ‘wasteful North’ and ‘starving South,’ plus the wild card of climate change looming on our collective horizon, we are also awash with clashing, largely ideological, camps proclaiming they have the one-stop solution to our planet’s (food) woes: organic agriculture, localism, urban agriculture, GM (or non-GM) agriculture, radical technological innovation (e.g. test-tube meat).

Yet, despite the warm-fuzzies gained from buying only local, organic food, actual research has shown that these non-conventional approaches are best suited only for particular niche crops and environments. Neither approach on its own, nor combined, will solve our global food crisis in the coming century. In fact, recent research shows buying local food that is out of season is perhaps the least environmentally friendly thing one can do (not to mention the impacts it has on the livelihoods of Southern farmers).

Ramankutty’s research suggests that global food productivity can be doubled by making intelligent tweaks on a global scale: increased fertilizer and water applications in Africa and Latin America, and less fertilizer, and perhaps more organic and urban agriculture (for certain crops only) in the global North. Seriously reducing our consumption of meat, he argues, could drastically improve energy efficiency, while making across the board policy efforts to reduce various kinds of waste could free up a huge number of calories for the planet.

Here’s our own exclusive 10-minute interview with Dr. Ramankutty, who sat down with us at the Liu Institute for Global Issues late last year: 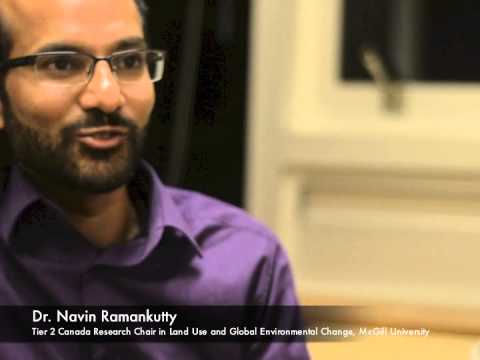 In the meantime, for more on global food security, check out the following recent pieces:

Here are some oft-cited recent academic papers on the issue:

And for some long-form thoughts on global food security and its ramifications, have a look at: