Posted on September 24, 2011 by Jennifer Stieda 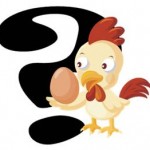 “Wherever we start in such a chain of cause and effect, we can identify an interaction between technical qualities and social constructions – an interaction so intimate that it is hard to see where the technical ends and the social begins.”  – Bolter (2001).

Is it possible to know which came first?  Does common social necessity give birth to new technology?  Or does new technology lead people into new social spaces as espoused in technological determinism?  I’m a fence-sitter and cannot see either side clearly which is, apparently, Bolter’s opinion as well.  Of no doubt, however, is the inevitability of change via technology.  I’m curious to see how close we get to Kurzweil’s Technological Singularity in my lifetime (Kurzweil, 2005)!

Kurzweil, R. (2005).  The singularity is near:  When humans transcend biology. New York, NY:Viking.