Where to publish? | Top Development Journals:
A Guide for the Perplexed

Many of us are still in the throes of graduate research. As such we’re less experienced (and often less confident) in our work than are seasoned academics, and we struggle with how best to package and disseminate our findings for maximum effect. Choosing the right journal to submit to is central to this process. Not only does the choice of journal label us as emerging experts (or not) in one field versus another, it also has a direct impact on how we go about analyzing, and ultimately articulating, our data.

With that in mind, we’ve begun trawling the internet for methodical rankings of journals that focus on global development issues. Below is a roundup of what we’ve found thus far: 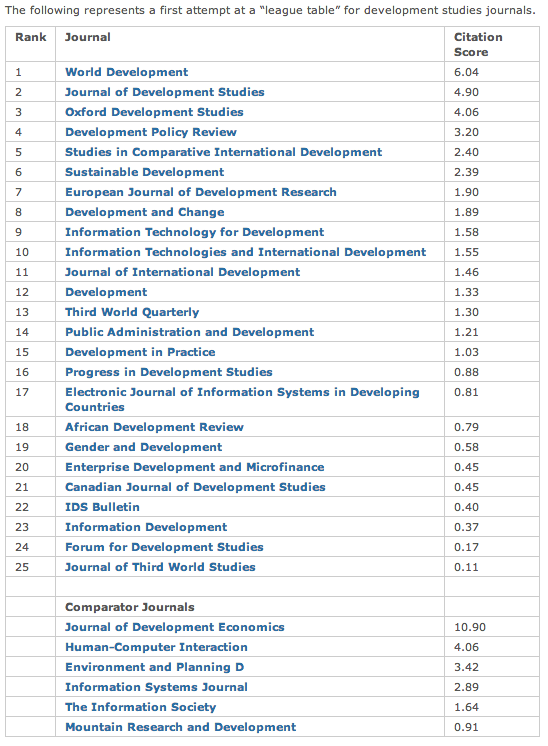 From the ICT4D blog, a ranking of development-focused journals based (roughly) on the average number of Google Scholar citations per paper, per year, in each journal. This ranking excludes development economics journals.   (Compiled in June 2010)

This table (above) is from IC4D, a blog that focuses on the role of information and communications technology in development. Their list uses Google Scholar to create an algorithm that approximates the average # of citations per paper/year for each relevant journal. (This differs slightly from a classic impact factor approach, which instead ranks journals based on a ratio of  # of citations : # of recent articles published). For some reason the folks at IC4D decided to explicitly leave out development economics journals from their ranking. 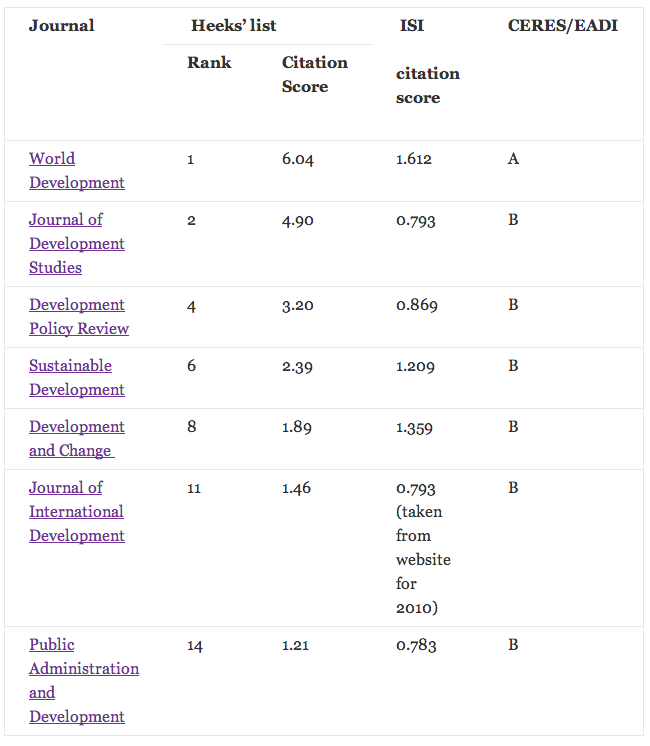 From Masters’ student Sarah Cummings research blog, comparing a subset of Heeks‘ ranking (published by IC4D, above) with several other indices, including those of the European Association of Development Research and Training Institutes. See here for more detail on Cummings’ methods. (Compiled in April 2012)

Apparently as part of her Masters’ research, graduate student Sarah Cummings put together the ranking, above, based on a subset of the journals identified by Richard Heeks in his ranking (via IC4D). In addition to Heeks’ data, Cummings includes the ISI citation score for each journal, and the letter ranking given by the European Association of Development Research and Training Institutes and the Netherlands’ Research School for Resource Studies for Development (CERES). Writing in 2012, Cummings appears to exclude some journals on the basis of their being primarily international, hyper-regional or comparative. Not sure why. 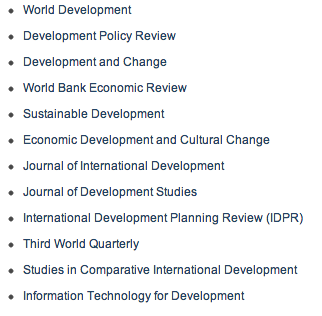 Next, Tulane University’s library hosts a page dedicated to ‘research tools for international development.’ The list to the left is one they provide, which ranks prominent development journals by run-of-the-mill 2011 impact factor. Although they don’t mention it explicitly, Tulane’s list also appears to exclude development economics journals. Nonetheless, a concise and helpful list.

Below, is a top-20 list of journals tagged with the term ‘development,’ and ranked by the (relatively new) SCImago Journal Rank (SJR) system. SJR uses network theory to add a ‘centrality’ weighting to its calculus, supposedly giving a more accurate representation of a journal’s prestige than does your standard impact-factor rating. It seems to us, however, that in this case, SJR’s ranking is skewed by its somewhat liberal application of the tag ‘development’ in its database of journals. 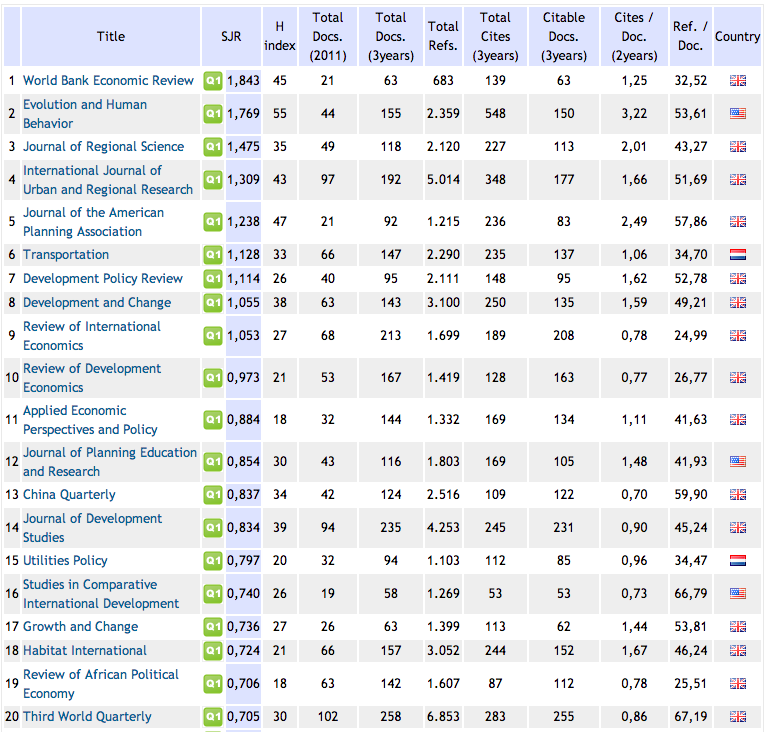 SJR rankings of journals categorized under ‘Development.’ Top 20, based on 2011 figures.

And here (below) is the same set of journals (using SJR’s categorization scheme) ranked instead by H-index, which puts greater emphasis on highly-cited articles than do other indices. 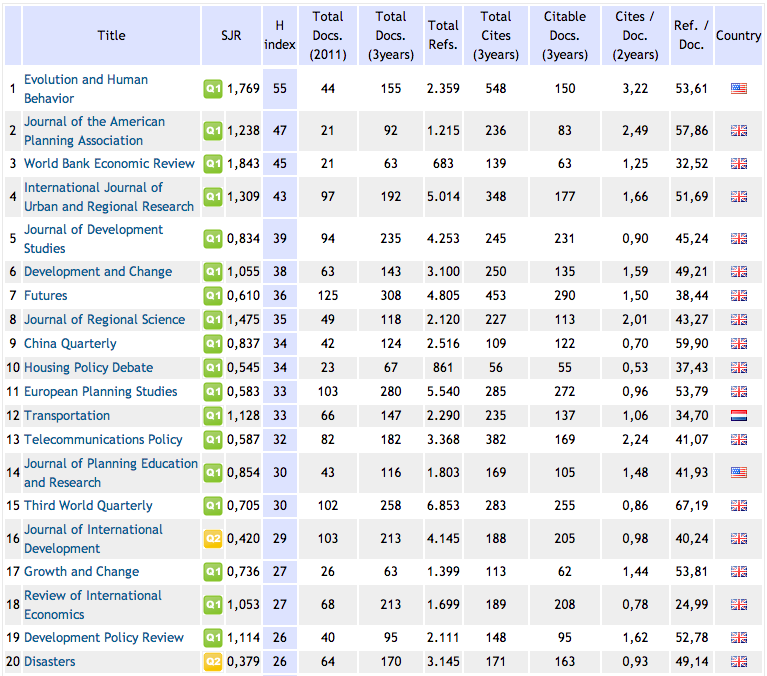 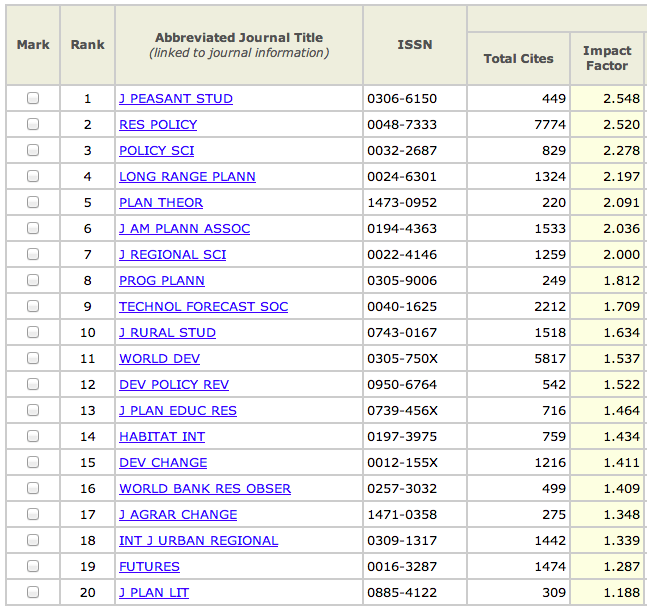 ‘Planning and Development’ journals, as categorized by the ISI Web of Knowledge, ranked by standard impact factor. The lack of distinction between ‘planning’ and ‘development’ creates a unique bias. (Top 20, based on 2011 data) 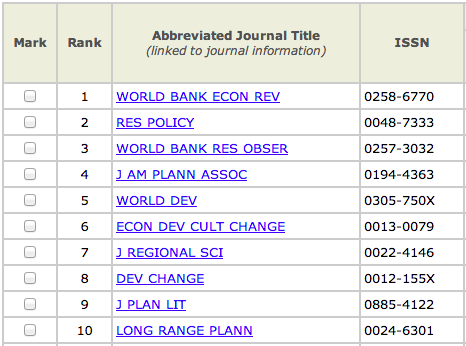 And for a bit of perspective, here’s the same database ranked by ISI’s ‘Article Influence’ score, which emphasizes the average impact of journals’ articles within the first 5 years after their publication. Journals ranked 1-6 in this list have ‘above average’ impact. 7-10 have average or less-than-average impact.

How about specific disciplines? With respect to development economics, the online consensus appears to especially favour:

Others relevant journals include the World Bank Economic Review,  the Journal of Economic Growth and the Review of Development Economics. (Hat tip to Dr. Georgio Secondi).

Geography journals are a bit more challenging to round-up, given many, but not all, often feature development-related research. In descending order of long-term impact, however (as per Thompson Reuters’ Essential Science Indicators database), they include: 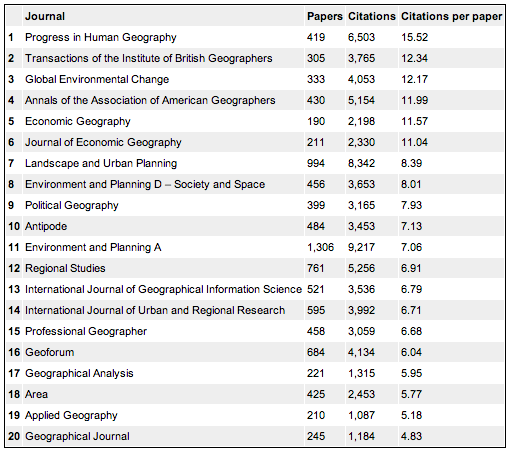 Top 20 geography journals, according to Thomson Reuters’ Essential Science Indicators database, which renders a long-term citation-rate ranking. Based on 1999-2009 data.

In political science the answer to the question of where to publish is, perhaps unsurprisingly, somewhat more contentious. Nonetheless, a (very) impressionistic meta-analysis of internet sources suggest that, for political scientists studying development, the most respected publication venues include:

What about anthropology? Anthropology’s a bit tough to parse using online databases alone, since physical and material anthropology tend to get lumped together with cultural and social anthropology. That said, by excluding physical anthropology journals from the lists generated by online searches, the following journals emerge as relatively well-ranked and relevant (some overlap with sociology, history and area studies):

Sociology is another discipline that does considerable work on themes of international development. Sociologist Dr. Matthew Sanderson has compiled an excellent list of relevant development journals from his discipline’s perspective, which can be found here. Many of them overlap with economics, political science and anthropology. As follows are a few of the notable journals on Sanderson’s list that haven’t appeared prominently, if at all, on the other lists, above (listed here in descending order, by impact factor):

Although it still has a low impact factor, another noteworthy mention is Journal of Globalization and Development, a newcomer (2010), but with a high-profile editorial board (including Joseph Stiglitz, amongst others).
.

Area studies is awkward to search for, given, well, it depends on the area you’re interested in. That said, here are some of the higher ranked journals focusing on specific developing regions of the globe (in descending order, by impact factor, for each region):

Global health is a field that spans public health and medicine, broadly, but mainly with a focus on developing countries. Apart from the standard New England Journal of Medicine, Lancet, British Medical Journal, or PLoS Medicine, some top target journals for global health researchers include the following (in descending order, by impact factor):

There are also several journals with very high impact factors that only publish articles on AIDS. These include: Journal of the International AIDS Society, Journal of Acquired Immune Deficiency Syndromes and AIDS and Behaviour.

Other relevant disciplines include planning, engineering, ecology, agricultural science, and various sub-fields of economics, amongst others. However, we’ll leave the post off here for now. If you have any suggestions or additions, feel free to add them in the comments.

1 Response to Where to publish? | Top Development Journals:
A Guide for the Perplexed