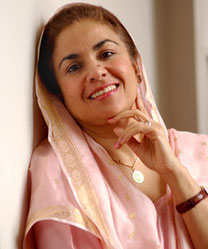 Dr. Nikky-Guninder Kaur Singh is the Crawford Professor and head of the Department of Religious Studies at Colby College. Her interests focus on Asian Religions, feminist issues, and sacred art and poetry. Dr. Singh has published extensively in the field of Sikh Studies and Punjabi Literature. Her books include Of Sacred and Secular Desire: An Anthology of Lyrical Writings from the Punjab (IB Tauris 2012), Sikhism: An Introduction (IB Tauris 2011), Cosmic Symphony (Sahitya Akademy, 2008), Birth of the Khalsa (SUNY 2005), Feminine Principle in the Sikh Vision of the Transcendent (Cambridge University Press, 1993), Sikhism (Facts on File, translated into Japanese, 1993), and The Name of My Beloved (HarperCollins1995; Penguin 2001). She has authored over 100 articles and chapters, and has delivered more than 250 lectures nationally and internationally. 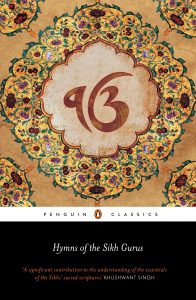 When did you decide to become a scholar of Sikhism?

I can’t think of any particular moment – it was a slow, gradual process. I had been going to a Convent school in India, and came to the USA to attend a girls’ prep school, Stuart Hall, in Virginia. During a course on American Transcendentalists I read Walt Whitman’s poem “A Passage to India” that raised my self-consciousness. As I began to question my identity, I felt my Sikh roots getting stronger and stronger. Perhaps it was the distance too. I missed my home, my wider community, and the elemental Punjabi of Bullhe Shah and Amrita Pritam that I had absorbed with Punjab’s dry summer heat and its drenching monsoon. I began to wonder and long for the world I belonged to. So, in college at Wellesley I began to study Sikh literature. Of course, there were no courses on the subject as such, so during the summers when I’d go home to Patiala, I would study Gurbani with my favorite Gyani-ji, Sardar Gurcharan Singh. He was like a family member, and every afternoon we would closely read a set of Guru Nanak Bani. I continue to treasure those volumes with my scribbles and notes as we read in my home bustling with the love of Mom, Dad, Chachaji, and Bibji. My father, Professor Harbans Singh, Chaired the department of Religious Studies at Punjabi University, so I got to meet scholars and poets who inspired me, nurtured me. At Wellesley my Professors were extremely open to my ideas and gave me the freedom to pursue my literary heritage. For my East Asian Religions course that I took in my sophomore year with Professor Holmes Welch, I wrote my final paper on a comparative study of the Tao and Ikkoankar. It turned out to be my very first publication (Journal of Medieval Indian Literature, 1978). For my BA honors at Wellesley I wrote Physics and Metaphysics of the Guru Granth Sahib which was published as a book (New Delhi: Sterling Publishers, 1981). How could the metaphysical word flowing spontaneously and speedily shape into such physical symmetries, artistic designs, innovative similes, enchanting paradoxes, and brilliant metaphors? That initial question continues to intrigue me to date. I’d say it is the ground of my scholarship.

How do Guru Nanak’s teachings tie into feminist perspectives within Sikhism and the modern world today?

A feminist perspective basically elicits understanding Guru Nanak’s verse in its expansive and inclusive imagery, and using that understanding in everyday practices to empower both Sikh men and women in their private and public lives. For me, then, Guru Nanak is a feminist because he championed equality and justice for both men and women, just as he did for Brahmin and Shudra, Hindu and Muslim; no one to be treated any more nor any less than the other. For Guru Nanak gender-justice is an issue of human rights. It is entangled  with broader historical, political, and economic circumstances. In my writings, I have been analyzing his revolutionary feminism from his gender-inclusive theology  and female-centered spirituality, but as I keep repeating, we need to read his works intentionally with our 21st century lens. For our dangerously divided world, he is the model of  empathy – of understanding the other, literally standing under their perspective, not marching forward with the rhetoric of saving others as we tend to do; he is the model for respect and keen understanding of the cultures in which gender norms and restrictive codes evolve.

Why do you think the study of Sikhism and Punjabi is important in today’s age?

Sikh literature is so rich philosophically and artistically—how could the academy ignore it?  The scripture is a melodious ensemble full of vibrant spiritual, emotional, social, and political resonances. Each simple brief passage is so richly packed that it can be utilized to navigate any aspect of life at any stage. Guru Nanak’s timeless verse infiltrates precise historical moments and emotions to generate new values, new attitudes, new orientations, new social, and environmental relationships. The Sikh Gurus have given an inexhaustible literary reservoir that generations across cultures can keep drawing upon to address specific needs and urgencies. 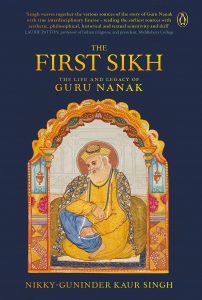 What advice would you share with those interested in learning more about Guru Nanak’s teachings and works?

Go quickly to his beautiful all-embracing lyrics. Read Guru Nanak yourself!  Let him speak to you directly – without mediations, without interpreters, and without translators too! His short, simple, inclusive, full of sublime love verses are infectious.  He prescribes no do-s or don’ts. So don’t let anything get in your way. Feel free and reach out to his compositions. They are inspirational – fill the inside with love and freedom, they empower the readers and activate them to work for the common good.

What sparked your interest in studying Punjabi? Why is the study of Punjabi language important?

Punjabi is my mother-tongue, my life and breath (jiṅd jān), to use poet Dhani Ram Chatrik’s expression.  But I realized its full significance when I left the Punjab and came to an American boarding school. Being the only Punjabi in the area, I longed for the language I was used to hearing from the lips of my mother and grandmother. My childhood home was the Punjabi University at Patiala, set up in postcolonial Punjab for the advancement of Punjabi language, literature, and culture (the “Hebrew” University in Israel perhaps is the only other University founded on “language”). Far away in Virginia,  Punjabi became a precious treasury of all that I was wrenched from. In the seventies we did not have the luxury of internet connections; even phone calls to India had to be placed hours in advance, and the expensive audio results were but crackling sounds. The study of Punjabi language is emotively important to me.

Punjabi is also aesthetically vital. Its literary and historical texts are extremely rich and expansive. My interest in the academic study of Punjabi was sparked by the powerful spirituality of Sikh scripture recorded in the Punjabi language in the Gurmukhi script. The simple elemental beauty of the language illuminates the condensed diction of the authors, it renders their similes and metaphors drawn from the ordinary walks of life extraordinarily wondrous. In order to access the immediacy and profound sensuousness of the singular Divine in the Sikh tradition, study of Punjabi language is essential.

Moreover, in our global horizon, Punjabi is essential for pluralistic engagements. Sikh scripture itself brings together the voice of the “Sikh” Guru Nanak, “Muslim” Sheikh Farid, and “Hindu” Bhagat Namdev. As this literary platter offers images and symbols  from different religious and cultural backgrounds, its linguistic medium enables us to recognize the different features of our shared humanity, and overcome fear and alienation of the other.

Prior to the British annexation of the Punjabi in 1849,  Muslims, Hindus, and Sikhs shared their everyday feelings, experiences, and understanding of the world in the Punjabi language. Lyrics of Guru Nanak and Bullhe Shah were cherished by Punjabis across religions. But anxious about their strength and solidarity, the British rulers incited divisions of religion, language, ethnicity, and nation, which eventually led to the brutal division of the Punjab in 1947. The heterogeneous linguistic world of pre-colonial Punjab was reduced to homolingual units: Urdu, Hindi, Punjabi; linguistic parochialism dismembered the common mother tongue —  “murder” of the mother’s nutritious milk (title of Shiv Kumar Batalvi’s poignant poem dudh da qatal). Since Partition  Sikh, Hindu, Muslim and Christian poets from both sides of the Border have been bringing in a message of hope. Dhani Ram Chatrik, Bhai Vir Singh, Firoz Din Sharaf, Amrita Pritam, Mohan Singh, Prabhjot Kaur, Gopal Singh Dardi, Dr. Fakir Muhammad Fakir, Shiv Kumar Batalvi, Joshua Fazal Din, Surjit Patar, Amarjit Chandan and others frequently return to the waters of the five rivers they drank from together, the fields they harvested together, the land they danced in together.  During this uncertain, fearful period we need them to feed us, to awaken and revitalize our senses, psyche, imagination, and spirit.

Today there are more than 130 million speakers of Punjabi across the globe. A few years ago I published an anthology of Punjabi poetry: Of Desire Sacred and Secular to remind Sikhs, Hindus, Muslims, and Christians of their shared consciousness, which has been obscured by divisive politics and is in danger of being lost. The symphonic Punjabi voice has the potential to transform flames of conflict into flames of mutual respect and understanding. The poets express desires, physical and metaphysical, that shatter divisions and polarizations. Whether it is the “desire” for the transcendent Divine or the “desire” to be treated humanely, male and female writers think with their senses, they perceive the Divine in their everyday experience, they make us aware us of our human responsibilities. Their poetic arabesques open a new horizon for us to reflect on the political, the social, and the moral in our postmodern world. They show us the way to move out of religious, national, and racial constructs. Punjabi language is the mortar to renew the shared cultural universe of all Punjabis, and build strong inter and intra-religious bonds.

Can you share more about your story and what led to you becoming a professor?

I don’t think I ever imagined being anything other than a teacher. Since I was in primary school I wanted to teach. Even before I finished my Ph.D., I got a teaching position.  Indeed, I have been living out my dream. As a student I enjoyed my undergraduate years at Wellesley the most — which have only extended over the last 34 years at Colby!  At this New England Liberal Art’s College, I have  the opportunity to go deeper into my area of Sikh scholarship, while being able to enter new areas of research and offer courses like India and the Western Imagination, Bollywood films,  Global South Asia.  Colby students are dynamic and creative. Through their questions, comments, friendships, and independent studies, they inspire me to explore the confluence of deeply personal and academic dimensions of my heritage. Now I am beginning to have students whose parents were my students once upon a time. And my intellectual excitement? It multiplies fourfold —cavguna, a Punjabi phrase frequently used by Guru Nanak.