The 2017 project “Trauma, Memory and the Story of Canada,” brought together artists, activists, and scholars to explore the difficult stories that comprise Canada’s past in the context of the commemoration of 150 years since Canadian Confederation. The project received major funding from the Canada 150 Fund, the Canada Council for the Arts, the City of Vancouver, and the University of British Columbia, with the additional support of Simon Fraser University Woodwards. It included a multi-sited public visual art exhibition curated by visual artists Raghavendra Rao K.V., a related series of performances/events, and a theatre production by director/playwright (and SACHA co-founder) Paneet Singh. Dr. Murphy acted as Production Manager for the exhibition.

The main site for the exhibition was the “Punjabi Market” area in Vancouver, which at the time was at that time undergoing major transformation. Buildings were being torn down, and the character of the neighbourhood was being transformed. The exhibition sought to insert itself into this transformation, placing works of art ion the fencing surrounding the places where newly-demolished buildings were located, and in abandoned buildings. The effort was to call attention to the histories and communities associated with this area, which had been a central location in the city for immigrants from South Asia. The other sites for the exhibition were the Asian Centre at the University of British Columbia, and Woodwards Downtown at Simon Fraser University. 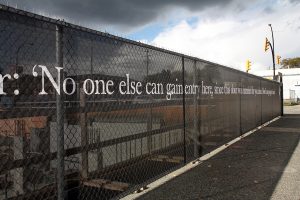 This work by Hyung-Min Yoon, Intended for you Alone (2017), was exhibited around the site that once housed All India Sweets in “Punjabi Market,” reflecting the dramatic gentrification underway in that neighbourhood in 2017. (At the corner of 49th and Main) 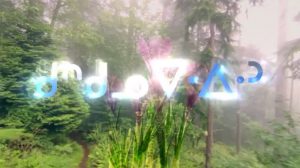 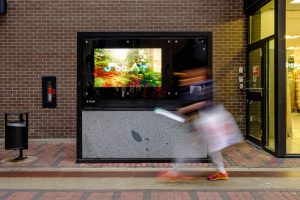 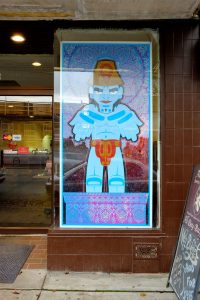 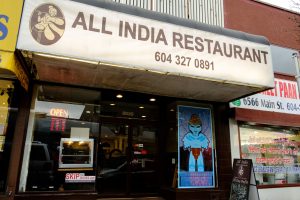 Sonny Assu’s installation, Welcoming Those They Did Not Want (2017), at All India Sweets in the “Punjabi Market”(at 49th and Main Street) demonstrated the welcome that would have welcomed the passengers of the Komagata Maru, if the First Nations and Indigenous Peoples of this region had determined how the ship and its passengers were received. 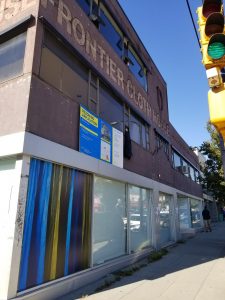 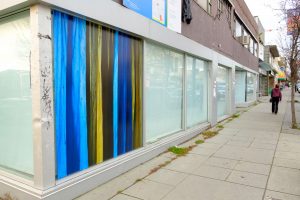 Vicky Alexander’s photographic installation at Frontier Cloth House at 51st and Main Street was meant to evoke the vibrant life that once was on Main Street, in that period of transition. 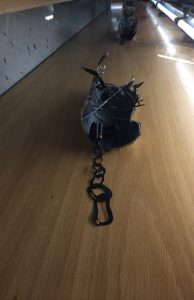 Umesh Maddanahalli’s work, How this will end (2017), was on view at the UBC Asian Centre, and included performances for the 30 September Opening in Punjabi Market and on 13 October at SFU Woodward’s. 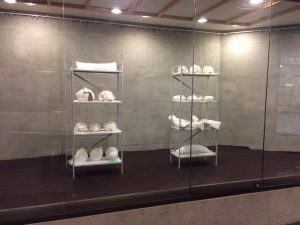 Sameer Farooq’s work, Pouf, Sausage, Weight, Arc (2017), was exhibited at the UBC Asian Centre. It was fashioned to mimic museum-quality objects that are wrapped for “safe keeping,” gesturing towards the ways that museums and archives both conceal and reveal knowledge, and the gaps in what we can know that follow. 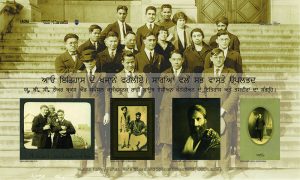 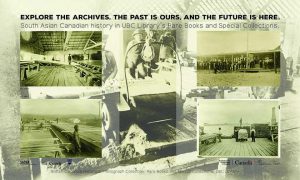 We also designed vinyls featuring previously unpublished archival photographs of members of the Punjabi Canadian community from the collection of Rare Books and Special Collections, UBC Library, to draw the attention of the public to the South Asian past in British Columbia and to explore the Library’s collection. These vinyls were designed by the Art exhibition curator Raghavendra Rao K.V., and Dr. Anne Murphy, with input from Paneet Singh, and were displayed on fencing around a site under construction at Main and 49th.

A second project “Difficult Stories: A Graphic Histories Project” brought together narrators and artists to explore troubled aspects of the Canadian past, including both the traumas that brought people to Canada, such as violence and persecution, and the violence and pain of Canada’s own establishment, such as the experience of Indigenous peoples at the hands of the Canadian state. Sexual harassment was addressed by one project, and the memories of Edward Bird, who defended the Komagata Maru passengers in court in 1914, were the subject of another, demonstrating a choice of action against white supremacy within a context where racism was enacted as state policy.

Two works created as a part of this project are included here:

More recent work along these lines has converged with the Memory Work along the India/Pakistan border project, and led to the foundation of a new group, MAHA, the Multdisciplinary Arts and Histories Association, in 2020, comprised of artists, scholars, and documentary filmmakers from Canada, India, and Argentina. The group will be continued after 2022 as an artists’ collective, to allow for greater flexibility in its work.