Posted on September 7, 2013 by kgreenhalf 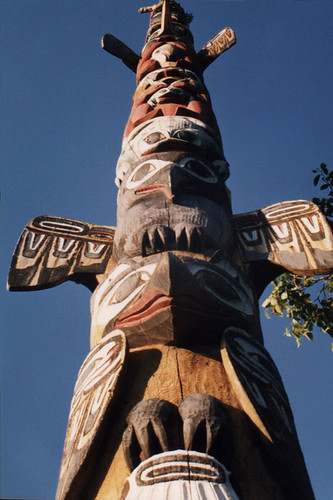 Some people might first look at this image and think what does this have to do about text technologies? I chose this image because something I learned is that Totem poles were developed as a traditional way of telling the stories of Aboriginal families and clans, and of keeping records of important historical events. There were originally only six West Coast First Nations that carved totem poles before the arrival of the European explorers were the Haida, the Nuxalt, the Kwakwaka’wakw, the Tlingit, the Tsimshian, and the Coast Salish people. The commercialized items and for-profit artists carving totems are a non-Aboriginal copying of a vital First Nations communication tradition that dates back thousands of years.

Now for my introduction,

My Name is Keith Greenhalf and this is my 6th MET course. I recently taught for 4 years in a remote, Tsimshian First Nation community called Kitkatla as the Special Education Teacher. In March of this year my Wife and I had a beautiful baby girl Grace. With the birth of our daughter we decided that this summer we would be moving back to our hometown of Windsor Ontario. We just moved back in July and it has been a lot of work moving a baby and our lives across the country. We are finally getting settled in to our house and I am looking forward to start this course.  I have many experiences and connections to First Nations people across Canada. I just got the text for this course and it actually looks like it will be an interesting read.

I look forward to connecting with some classmates as the course progresses.