Posted on September 6, 2013 by troymoore 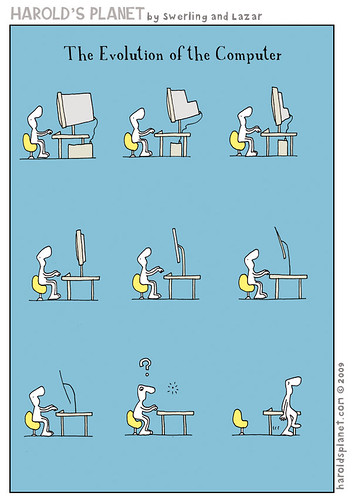 Hello peers, colleagues, and other general ne’er do wells,

The image I chose was the evolution of the computer. The reason I chose this is because, in my belief, everything evolves. Text and technology evolve simultaneously. As technology evolves so did text. The printing press, for example, opened up writing to an entirely new group of people. Text was no longer simply the property of the wealthy. The computer and subsequent ‘smart’ devices’ has had a similar impact. It has opened up communication and text to the entire world. It has also evolved language. 15 years ago if you were asked about html code you would have thought the person was crazy. Lol. Brb. omg. If you know what these mean, your language has evolved. The evolution of technology, as the picture illustrates is smaller and faster, until there is nothing left.

As for me, I am Troy Moore a librarian and Writing 12 teacher from beautiful Quesnel, BC. I am currently in my 7th and 8th MET course with plans on finishing in April. I chose this course because I believe that technology is absolutely changing reading and writing. I can store a library’s worth of books on a laptop or a external drive. I can listen to books on an ipod or mp3 device. I can publish my work for the world to see using only my computer, a task once ruled by publishers. Also technology is changing text. Smart phones have created their own language. Programming and code have created their own language. We live in a time of unparalleled access to communication and I look forward to getting to know all of you.

Librarian/Teacher at Correlieu Secondary School.
View all posts by troymoore →
This entry was posted in Introductions and tagged introductions, text and technology. Bookmark the permalink.