In closing, a Visual to Connect

Although part of me has known this fact for a while, our journey from ‘Papyrus to Cyberspace’ has solidified for me the fact that I place great importance on visuals that accompany text. At first I thought that this preference might be based on my personality, learning style(s) or any number of reasons. Having been introduced however to the link from ‘Orality to Literacy’ I see now that visuals have been an integral part of formal communication for centuries. Images, illustrations and ‘illuminations’ have been there from the beginning. In fact some might sight cave paintings as first examples of written records.

So it is not hopefully, too far of a stretch then to end with some words accompanied by a visual, made up of words. 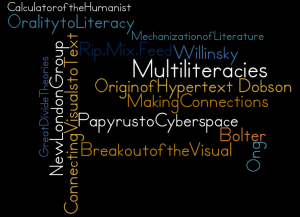 These words comprise the major ideas and names that have impacted and altered my thoughts along the past 13 weeks. In visual form, they will be able to quickly remind me of their inter-relatedness and interdependence. Here, there is a ‘Breakout of the Visual’ which ‘Connects the Visual to the text’ by way of a ‘Rip.Mix.Feed’ that I have seen elsewhere but, up until now, never explored myself.

In time I will revisit this visual and it will surely assist me in making the connections we collectively explored in this course.

Best wishes and good luck to all,

My name is Ryan Dube and presently, I am a High School English and Social Studies teacher at Belmont Secondary School, in Langford, BC, which is approximately 15 min North of Victoria. My interests and reasons for joining the MET program revolve around exploring ways in which to encourage multiliteracy and foster educational relevance as we enter the 21st Century.
View all posts by rahdube →
This entry was posted in Uncategorized and tagged Making Connections, Reflection. Bookmark the permalink.

1 Response to In closing, a Visual to Connect