Bill Rafoss recently (August 11, 2011) wrote an article for the Saskatoon Star Phoenix. Bill has shared the article with me and I reproduce it (with Bill’s permission) below as well. 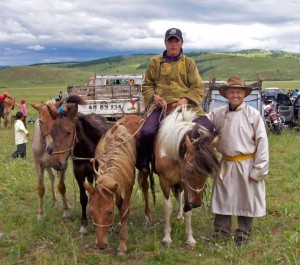 Bill Rafoss is a Sessional Lecturer at the University of Saskatchewan teaching in Canadian Politics. He went to Mongolia as an election observer in the 2009 presidential election and again this summer to research post-election violence.

Canada remains one of the last major western countries to operate its electoral system on the ‘first past the post’ system. Three of Canada’s provinces have considered changes to that system, to date unsuccessfully. Mongolia too is considering changes to its electoral system, moving from the first past the post system to one that includes proportional representation. The results of that debate could change the complexion of the Mongolian Parliament or Great State Khural next year.

Mongolia is a parliamentary republic that has been dominated by a two-party system since it severed its ties with the former Soviet Union in 1992. The Mongolia People’s Party (MPP), formerly the Mongolia People’s Revolutionary Party (MPRP), has been the natural governing party since 1992, but recently the opposition Democratic Party has been challenging the MPP for government.

In the last Parliamentary election in 2008, the MPRP won the most seats in parliament to the dissatisfaction of many urban Mongolians. Rioting broke out in the capital, Ulaanbaatar, following the vote and five people were killed in protests with the police. A Presidential election occurred in 2009 and the Democratic candidate won the Presidency. This sets the stage for a showdown in the next parliamentary election in 2012.

There are two other parties in the Mongolian khural: the Green Party and the Civil Will Party. These smaller parties, joined by other parliamentarians and civil society members, have been calling for electoral reform as a means of making parliament more inclusive. Many see parliament as an ‘old boys club’ fashioned for wealthy men. The leader of the Civil Will Party, Madam S. Oyun, has been an out-spoken critic of the first past the post system. She would like to see Mongolia move to a pure proportional representation system. Under such a system, her party’s 11% vote would translate into approximately the same number of seats and this might give her Green-Civil Will coalition greater bargaining power in Parliament, to the extent that they could even hold the balance of power. This could assist them greatly in forcing swifter action by the government on issues like unemployment and poverty as well as pollution in the capital city. Currently, some 30% of Mongolia’s population live below the poverty level.

A Parliamentary Committee has been struck to recommend changes to the electoral process. There is some urgency to this committee’s work if Mongolia is to avoid the violence that marked the 2008 election. However, the Committee itself has been unable to reach consensus on a new approach. Larger, national parties tend to favour first past the post since it affords them the best chance of achieving a majority government. The MPP in particular, sensing that it has the most to lose in a PR system, has rejected PR for all 76 members of parliament. The latest proposal on the table is to move to a 38/38 formula, where half of the MP’s are elected at the local level, as we do in Canada, with the other half elected through proportional representation from party lists of candidates. In other countries that use proportional representation, these lists tend to field a more diversified group of candidates than the FPTP system.

A decision on changing the electoral process must be made by December 31st this year if the process is to change for the parliamentary election next year. A decision to change to the 38/38 formula could result in a more diversified parliament, where more voices are represented and likely more women are elected. If there is no change, the two party system will continue to dominate Mongolia, with the only question remaining which party will hold power.

Mongolia has recently signed an agreement with Canada to modernize its civil service. Canada would do well in return to watch how Mongolia moves toward a more inclusive parliament, as it may wish to consider such changes in the future.

Julian Dierkes is a sociologist by training (PhD Princeton Univ) and a Mongolist by choice and passion since around 2005. He teaches in the Master of Public Policy and Global Affairs at the University of British Columbia in Vancouver, Canada. He tweets @jdierkes
View all posts by Julian Dierkes →
This entry was posted in Party Politics, Politics. Bookmark the permalink.