According to the 2010 Mongolia Census, 30.6% of Mongolians (six years old and older) use the Internet. The level of Internet usage is higher in Ulaanbaatar (49.3%) and some urban centers, such as Erdenet (36.5%) and Darkhan (34.4%). A wide digital gap appears to exist particularly between Mongolia’s far western provinces and Ulaanbaatar as only about 10% of far western residents use the Internet. The usage of internet is urban-centric, but it is growing and diversifying.

Nowadays, some cellphone network operators provide inexpensive access to Internet (at least using messenger and email services) in Mongolia. The usage of cellphones is increasing dramatically. 74% of Mongolians (including children) and 86.9% of the residents of Ulaanbaatar have at least one cellphone. Two years ago, one could find a “street-phone” or a portable telephone, which all small kiosks and street vendors had everywhere in Ulaanbaatar. Now, they have disappeared.

Obviously, the increasing usage of Internet and cell phones has many important implications for everyday life, politics, and business. Broadly, it makes a landlocked country “land-linked,” and its people more connected. The map that you see below shows an interesting pattern. It obviously shows the expansion of Facebook, but it in part shows a difference between Mongolia and its immediate neighbors. 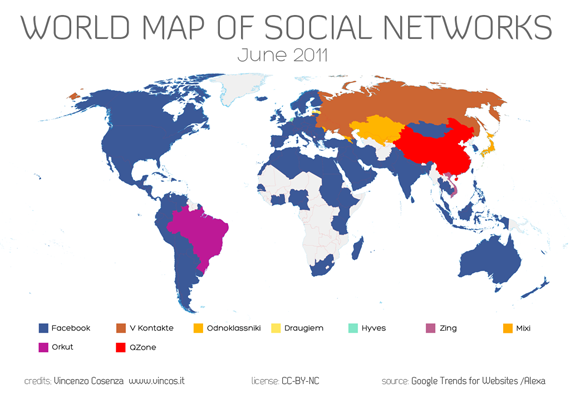 This entry was posted in Population, Society and Culture, Ulaanbaatar and tagged BYAMBAJAV Dalaibuyan. Bookmark the permalink.