The Political Theatre of a State Visit to Mongolia

Posted on November 7, 2013 by Julian Dierkes

October 25 was the first day of a two-day State Visit by Canadian Governor General David Johnston to Mongolia. Ahead of the visit, I offered some background. For me, this was the first state visit by anyone anywhere that I was able to observe somewhat up close. It is impressive to see how much threatre is involved in such a state visit. I do not mean to suggest that such visits are entirely theatrical, but that some of the ceremony and protocol observed certainly is elaborate from up close.

Day 1 of the State Visit

The first day of the visit, October 25, was full of the theatre that comes with the protocol for a state visit, but also full of some substantive themes that reiterate the case for an on-going and – ideally – expanded relationship between Canada and Mongolia.

When I arrived about an hour after Canada One had landed on Thursday evening there was evidence of a state visit in that from Peace Bridge on into the downtown core, every third lamppost is adorned with a Canadian (and Mongolian) flag.

Friday unfolded roughly as it is described in the official itinerary or at least that marked a number of the events that I was able to participate in/observe.

After the national anthems, the Governor General and the President inspected the honour guard to then enter Government House together with their entourage and official delegation.

There are many more (and much better quality) photos of the subsequent events available on the Governor General’s website.

Residents of Ulaanbaatar would certainly have been well-aware of something going on. Every time the official motorcade of the Governor General moved, it was quite a production with a whole column of cars, including a substantial security detail. Even more impressively, police officers always lined the streets for these movements, not only blocking cross-traffic and ensuring that there was no traffic anywhere on the actual route, but also providing a facade of officialdom and political theatre to the movements of the visitors.

As a layperson, I would suspect that a) there are few immediate threats to the Governor General’s security, and b) the police officers lining the streets might actually provide fairly limited security. However, I also have to admit that travelling in such a motorcade is a most efficient way of moving about anywhere. I certainly have never and will never again go from downtown Ulaanbaatar to the presidential palace in Zaisan with such speed.

The Cavalry of the Mongolian Honour Guard

The Mongolian honour guard is certainly always a fine spectacle. This spectacle was enhanced during a state visit by the cavalry of the honour guard. As anachronistic as this seems, soldiers on horses are an impressive sight and thus add to the theatre of the occasion. The sight is nicely captured in this official photo from the GG’s website: Honour guard in front of Government House in Ulaanbaatar.

The honour guard also lined the driveway into the presidential resident at Ikh Tsenger before the State Visit on the evening of the 1st day. Here’s my snapshot out of the moving bus in the motorcade:

One of the fellow passengers quipped that this was the Righteous Mongolian Mounted Police (RMMP), reminded of the red-clad RCMP omnipresent at Canadian ceremonial events. While the RCMP seems to supply the security for the Governor General, they were in plain clothes, unfortunately, not in their dress uniform to match the Mongolian “look”.

I plan to write separate blog posts for some of the other events in the course of the State Visit.

Travelling on the Fringes of the Official Delegation

I was not officially part of the delegation that accompanied the Governor General. However, my UBC colleague, Bern Klein, was, as were four Canadian MPs and a number of other prominent Canadians, though few of them had any links to or knowledge of Mongolia specifically.

Since I was able to rely on Mongolian contacts to find my way into a number of events, it was only practical to hang around on the fringes of the Delegation, so I had a chance to observe other aspects of political theatre. Security around the Mongolian president is tighter and more theatrical than it is for the Governor General. President Elbegdorj is usually surrounded by a phalanx of security officers (yes, recognizable by that universal curly wire to their left ear [however did they recognize each other before the invention of that wire and the wrist-radio?]). This moving phalanx is often proceeded by other officers and officials who hurry any innocent by-standers out of the way of the incoming human island. While hanging around the fringes of a delegation thus offers many opportunities to catch glances of these public figures, there are very few opportunities for any direct interaction, at least in these public moments.

By contrast, there are ample opportunities to meet and speak with other officials in this context. At the State Dinner, I was thus able to chat with a number of well-placed Mongolian foreign policy officials as they were sometimes also waiting for the movements of their excellencies to dictate the flow of an event.

I generally found the Canadian delegation to be relatively relaxed and approachable, except for two aspects: timing and photos.

Clearly, a state visit is highly scripted in terms of the movement of the visitors, and subject to a very tight schedule. Inevitably, some of that movement is delayed, leading to some frantic attempts to catch up and a bit of running, particularly for those on the fringes of a visit. 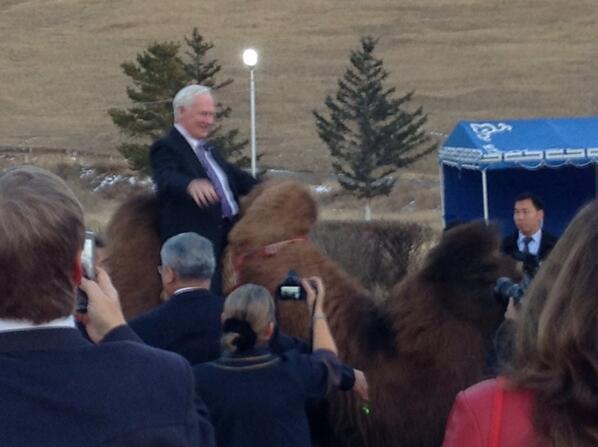 Look Ma, no Hands! The GG on a Camel at Ikh Tenger

Many people want to capture the theatre of a state visit, including members of the delegation and others on the fringes. While the Governor General travels with a photographer and videographer and some of the results of their very professional work is made available, there seem to be moments of great concern over the photo-taking habits of the camera-enabled cell phone, while other moments turn into a bit of a touristy free-for-all. Very few participants could thus resist the camel-riding Governor General at the president’s residence.

This was my second time to visit the presidential palace and the second time to observe some of the living culture that is included in these events in the park behind the residence. Ikh Tenger is situated south of downtown Ulaanbaatar and the entrance to a fairly pristine valley, and serves as the residence as well as for ceremonial events like the State Dinner.

In the park, living culture is on display in the form of animals, their handlers/riders, and bow-and-arrow as well as horseback acrobatics. There is also a ger set up where the President and whoever the visiting dignitary is, disappear for a bit of ceremony and a chat.

During dinner (very tasty and very elegant porcelain and silverware) there was a brief show of folk music (horse head fiddles, including the base which is always a treat, throat singing, long song, the shoulder twitching dance [apologies, I’m sure there’s a technical term for that, but if you’ve seen it, you know what I mean]). It turned out that it was a great blessing that I was sitting at the “kiddie table” furthest removed from their excellencies, since this was the table closest to the music.

Being close to the music also made me do a double-take on one of the performers. How did I know him? When I was chauffeur to the president and general secretary of the National Olympic Committee of Mongolia during the Vancouver Olympics, Tsagaan Sar was celebrated at a Mongolian lama’s house in Coquitlam (of all places). This musician was performing with the wonderful Tono show that was a collaboration with the Canadian Red Sky troupe. I ended up driving him and a colleague from New Westminster to Coquitlam and they were warming up in the car. Throat singing on “my” Olympic back seat? I thought I died and went to heaven! I didn’t have a chance to speak to him that evening, but met him again on Saturday.

More on the GG’s State Visit

Other posts that discuss the visit

For the Canadian International Council, I wrote about the wider implications of the visit and a ‘Diplomacy of Knowledge’.

Julian Dierkes is a sociologist by training (PhD Princeton Univ) and a Mongolist by choice and passion since around 2005. He teaches in the Master of Public Policy and Global Affairs at the University of British Columbia in Vancouver, Canada. He tweets @jdierkes
View all posts by Julian Dierkes →
This entry was posted in Canada, Education, Foreign Policy, Governor General's Visit 2013 and tagged Julian Dierkes. Bookmark the permalink.