Subscores: Freedom in the World Report

Posted on February 2, 2014 by Julian Dierkes

When the 2014 Freedom in the World report was released on January 23, it came with the following map: 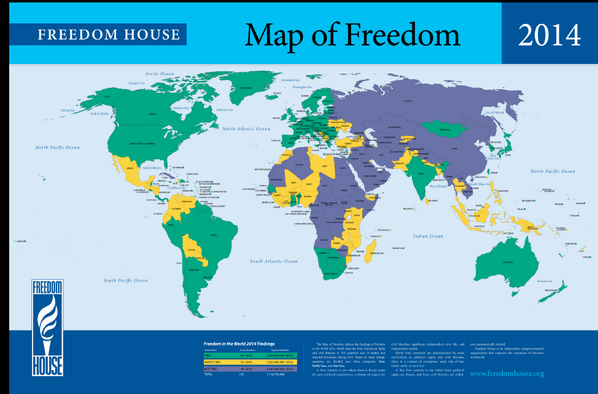 At the time I tweeted, “That dot of hopeful green in a see of authoritarian purple is #Mongolia #FIW“. I also quickly added this rating to the Mongolia Scorecard.

Apart from the obvious and embarrassing typo using “see” for “sea”, this tweet generated a lot of re-tweets, but also some reactions. Several Mongolians replied with comments disparaging the state of democracy and freedom in Mongolia.

Most of these comments were very general.

At the time I urged those who find fault with Mongolian democracy to think about this a) in a comparative perspective, but b) also to look at the details of the scoring to see whether they disagreed with any specific aspects.

It’s important to emphasize that few democracies, even those with high ratings in a comparative effort like that run by Freedom House, are perfect by any account of citizens of those democracies or observers. By whatever standard (empirical, philosophical, moral, ethical) one might apply, democracies fall short in functioning as an expression of the political will of the people in all kinds of ways. This is obviously true of Mongolia as well.

Whether it is the declining participation in elections in Mongolia, or the lack of policy options presented by parties, or the amount of corruption in Mongolian politics, there is much than Mongolians might choose to improve about their political system which – like other democracies – remains a work in progress. But this is true of Canada, as it is of Germany or Japan, just to list other democracies that I am most familiar with.

If we look at the more detailed scores for Mongolia that are available from Freedom House, we might look at a category like “Electoral Process”, for example, where Mongolia scores 11 out of 12 points. Examples of other countries with a score of 11 here are: Argentina, Brazil, India, Indonesia, Taiwan, and the U.S. Mongolia’s neighbours receive much lower scores here (as in other categories): Russia: 1, China: 0. The only full score of 12 in Asia is for Japan.

In another subscore where Mongolia’s ranking is much lower, “Rule of Law” (12/16) it is comparable to Ghana, Italy, Slovakia, for example. Asian countries with higher scores include: Japan (15), South Korea (13), Taiwan (14).

Corruption as an area for concern when it comes to democracy and freedom in Mongolia is included under C, “Functioning of Government” where Mongolia is ranked 9/12. This is a ranking that correspond to such countries as Croatia, Jamaica, and Namibia. Asian scores here range from Uzbekistan’s 0 to Japan and South Korea’s 10.

For anyone who disagrees with the rating provided for Mongolia in the Freedom in the World report, I would urge them to turn to the subcategory scores that are provided at http://www.freedomhouse.org/report/freedom-world-aggregate-and-subcategory-scores. The links provided here lead to Excel spreadsheets that provide much more detail on the Mongolian scores than the summary of Political Rights: 1, Civil Liberties: 2 = “Free” does.

What does this mean? All the categories are explained in the FIW Methodology.

From here, the subcategories take on more meaning.

Note that for all these scores, Freedom House “assesses the real-world rights and freedoms enjoyed by individuals, rather than governments or government performance per se”. For ratings the question is thus not whether the electoral process is successful in channelling the political will of the people, but whether this process enshrines and guarantees rights within this process.

The individual ratings are based on a series of criteria and questions that is also listed in the FIW Methodology.

As is listed in the FIW Methodology, the cut-off for a Political Rights ranking of 1 is 36 which Mongolia reaches exactly. For Civil Liberties, category 2 is assessed for subtotals for 44-52, so Mongolia’s score of 50 puts it toward the upper end of this range. The relatively low scores that were assessed for Rule of Law and Personal Autonomy and Individual Rights thus keep Mongolia in category 2 for Civil Liberties.

With an average between the Political Rights and Civil Liberties of 1.5, Mongolia falls firmly in the “Free” category.

These scores for 2014 are identical to those for 2013 when Mongolia had made a big jump in the rankings.

That jump was somewhat confirmed by the OSCE election observation mission report which reinforced the generally positive impression of procedures and regulations around national elections, the presidential election for 2013.

I had written about the 2013 Freedom in the World report when Mongolia moved up from 2 to 1 in the Political Rights section.

Full disclosure: I have acted as a consultant to Freedom House on the Freedom in the World report for Mongolia.

Julian Dierkes is a sociologist by training (PhD Princeton Univ) and a Mongolist by choice and passion since around 2005. He teaches in the Master of Public Policy and Global Affairs at the University of British Columbia in Vancouver, Canada. He tweets @jdierkes
View all posts by Julian Dierkes →
This entry was posted in Corruption, Democracy, Governance, Politics and tagged Elections, Julian Dierkes, Party Politics. Bookmark the permalink.

1 Response to Subscores: Freedom in the World Report