A few years back, Julian introduced me the concept of generational imprints and pointed out the work of Karl Mannheim.  Mannheim (Essays on the Sociology of Knowledge. Routledge: 1952) defined a generation as a social creation and argued that each generation receives imprints from the social and political events during their formative age.  Fascinated with this work, I did a little brainstorming for my MA thesis.  I am still hoping that the study of generational aspects could lead to more insightful examination of anti-Chinese attitudes in Mongolia instead of over-emphasizing its persistence among general public. Here is a bit long excerpt:

Logically, all generations talk differently about China, Chinese people, and their culture, because they have collective memories of significant events based on their first-hand or second-hand learning experience. Without rigorous interviews and analysis, it is impossible to prove generational aspects. Nevertheless, I will advance the following speculations to dis-entangle overall claim of persistent anti-Chinese attitudes in Mongolia a little further. Table 9 correlates seven generations, their sources of foreign education and orientation, experience (either first or second hand) of events, and political status to speculate potential attitudinal outcome in regards with China, Chinese people, and culture. If a generation received all sources of schemas, their attitude toward China may be neutral. In opposite, if a generation is only exposed to negative schemas during their formative age and has limited interactions with China, their attitude towards China could be mistrusted. And, even if they are exposed to positive and neutral schemas after their formative ages, their attitude to China may be cautious. At the same time, attitudes of generational cohorts also may alter significantly overtime due to dramatic changes such as start and end of Cold War and democratization. 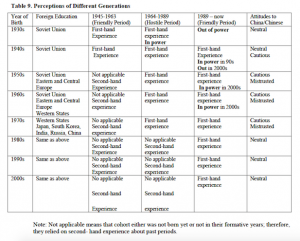 A cohort born in 1930 would have seen high-level exchanges of Sino-Mongolian leaders, a visible presence of Chinese workers and their families in Ulaanbaatar, unique Chinese goods (e.g., silk, fruits, and tea), and culture (e.g., song and table tennis), and heard about Mongolian participation in the Liberation War in northern China during their formative years (17-25 years). Many of those who were educated in the Soviet Union would have interacted with Chinese students in Moscow and a few might have had opportunities to study in Beijing. The generation would have also lived through a period of three decades, when all these interactions would have ceased. They would have seen a good China (providing assistance to Mongolia) and a bad China (cultural revolutions, political struggles, and the Tiananmen incident). This group of people might have played a crucial role in resuming normal relations with China at the end of the 1980s, since most members of the Political Bureau of the Mongolian Communist Party had been born in the 1930s.

The second cohort, born in the 1940s, witnessed some friendly Sino-Mongolia relations. But the students abroad in the Soviet Union would have had few interactions with Chinese people in Mongolia, because the Chinese workers in Mongolia were strictly guarded and influenced by the extensive propaganda and anti-Chinese attitudes. They would have been mostly aware of the images of bad China, and would have interacted closely with Russians in Mongolia and abroad, from their formative years, starting from the 1960s. As Mongolia transitioned into a democracy in 1990, the political elites from this cohort would have dominated most of the leadership posts.

The third cohort, born in the 1950s, would have had first-hand experience with anti-Chinese attitudes, but would not have interacted with Chinese until the 1990s. They were brought up under the “China threat” atmosphere and would have fulfilled their extensive military and civil defense obligations. Although they would have had first-hand experience of the Soviet-Mongolian brotherly relations, and been knowledgeable about the Soviets and the communist world, their views on China would be one-sided, since they would have lacked any exposure to neutral or positive views about China. This group has been a driving force for the democratic movements, and abhorred the Chinese and Romanian repressions of democratic movements.

The 1960s generation had experiences that were similar to those of their previous generations, though Sino-Soviet tensions had been reduced and the cohort began questioning the need to have military and civil defense obligations. During their study in the Soviet Union and Eastern Europe, the members of this generation would have had first-hand experience with the negative images of the Soviets in Eastern and Central Europe, and been exposed to liberal ideas and anti-communist discourses. They would be attracted to the ideas of democracy, market economy, and developments in the capitalist world. Their knowledge about China would have been influenced by the negative views; they would have disliked the Chinese repressions of 1989. On the other hand, this generation enjoyed free access to Chinese markets and infrastructure. This cohort is becoming the most influential group in Mongolian politics today.

The 1970s generation has mixed views about both China and Russia. They would have first-hand experience of the anti-Chinese propaganda, strained relations with Russia (withdrawal of Russian military and the anti-Soviet attitudes), and increasing interactions with China. They would likely have similar feelings about the Tiananmen incident and the growing Chinese economy, as would earlier cohorts. Nevertheless, Russia would no longer be the window through which to see the world, as it was for earlier generations. Cohorts from the 1940s and the 1960s were more familiar with Russia, its people, and culture, since 32,000 Soviet civilian workers with their large numbers of dependents, and 80,000 Soviet troops were in Mongolia in the 1970s and 1980s. The Russian language was a mandatory second language for thousands of Mongolians who were studying in the Soviet Union, from the time of their elementary school. This was not the case for generations, from the mid-1970s and afterwards.

Logically, generations of people, who were born in the 1980s and 1990s, will likely have the most neutral view of China and be rather cautious and mistrusting of Russia. They have not experienced the anti-Chinese (pro-Soviet) propaganda, and are able to have multiple views on most issues, links with the West, and access to vast amounts of information (from the Internet, cable TV, and newspapers). The most significant events they are likely to recall are the winning of two gold medals by Mongolians at the Beijing Olympic game, rather than second-hand knowledge about the Tiananmen incident and bad images of China from the 1960s. The increasing number of Mongolian students in China and China’s sustained projection of its soft power policy (e.g., visa waiver, granting access to Chinese infrastructure and medical facilities, developmental aid, and assistance) for Mongolia will certainly affect the attitudes of future generations in Mongolia. However, the results from AsiaBarometer (2005) and Asian Barometer (2006) yield interesting outcomes. First, all generations tend to hold neutral and negative views of China in both polls. Although there was no significant deviation between generations of 1930-40s and 1950-70s, younger generations (1980-90s) have slight positive impression of China in the Asian Barometer study. But younger generations in both polls were overly polarized while other generations have more neutral views (about 28-36%). Second, there are noticeable correlations between view of China and gender along with educational level of younger generations. Male participants and people with low educational levels hold more unfavorable view of China. The question will remain why views of younger generations are polarized and holding similar negative views as older generations.

These barometer studies are not likely reveal attitudinal shifts of generations. First, number of the sample, questions, conducting organizations, and timeframe of two barometers were different. For instance, when AsiaBarometer (2005) asks about Chinese influence, Mongolians responded in more negative while more positive as Asian Barometer (2006) asks about impressions about China. Second, each poll had a single question on China and one possible response. More insightful examination of anti-Chinese attitudes would need a specific set of questions. For instance, questions whether a person allow his children marry to Chinese, live next to a Chinese neighbor, or work in Chinese-Mongolian run business may help us to understand emotional components of anti-Chinese attitudes. Moreover, degree of awareness of Chinese culture (e.g., language, literature, religion, customs, and traditions), history, contemporary Chinese politics and socio-economic situation as well as Sino-Mongolian relations need to be examined by a carefully-designed questionnaire will contribute to our understanding of anti-Chinese attitudes. In addition to variables like age, gender, geographic location, it might be possible that other variables such as personal income, social status, and degree of interactions with Chinese people could correlate person’s attitude to China.

Without further study, it would be difficult to make firm conclusions about the anti-Chinese attitudes of different generations and their key generational imprints. Nevertheless, it is fair to speculate about the existence of lingering impacts from the artificially-consolidated past schemas on the younger generations, since the past schemas have not been de-constructed in historical textbooks, the literature, entertainment, or the political leaders’ discourses in post-communist Mongolia. A handful of empirical studies suggest that Mongolians generally hold unfavorable views about China, and the intensity of the anti-Chinese discourses in the media, blogosphere, and public domain is apparent.

Note:  this excerpt is directly taken from my graduate thesis, Anti-Chinese Attitudes in Post-Communist Mongolia (2011), pp. 34-38.  Here is the link to the full thesis.

Jargalsaikhan Mendee is a Deputy Director of the Institute for Defense Studies of Mongolia. He holds a PhD in Political Science from the University of British Columbia, and MAs in International Relations from the US Naval Postgraduate School and in Asia-Pacific Policy Studies from the Institute of Asian Research of the University of British Columbia.
View all posts by mendee →
This entry was posted in China, Nationalism, Politics, Social Issues and tagged MENDEE Jargalsaikhan. Bookmark the permalink.

1 Response to Anti-Chinese Attitudes in Mongolia through Generational Imprinting