Periodically, parts of the Mongolian countryside experience heavy snowfall at the end of a long, cold winter. These conditions combine to deny animals access to any kind of grass under the masses of snow when they are already weakened by winter conditions. This is what is referred to as dzud [зуд]. When dzud conditions extend beyond a region to the nation, this can be catastrophic leading to massive deaths of animals. Since conditions tend to be locally concentrated, it is not a proportional cull, but entire herds often perish.

Dzud can be devastating for herders in the Mongolian countryside. They have clearly been exacerbated in their impact by a struggle around how to prevent the massive death of animals in the absence of any kind of institutionalized provision of fodder. Cambridge’s David Sneath has done some very convincing research that compares feudal institutions, the state-socialist negdel, and today’s individualistic, market-based organization to explain the impact that dzud have had.

Dzud may also be exacerbated by the impact of climate change, especially as it contributes to overall grassland degredation..

Dzud are common at the regional level, though they only extend to a national catastrophe every dozen years or so, at least in the past.

Unfortunately, it is relatively difficult to tell when and how much dzud conditions spread. It is the end of winter that is most dangerous, but conditions in January, for example, do not necessarily seem to be a good predictor of the likelihood of dzud conditions in March.

The National Agency Meteorology and the Environmental Monitoring does provide updates and climate information, of course, but in the past this has not been detailed enough to allow a casual observer to get a sense of the severity or spread of local or regional dzud conditions. While a new SMS service for reporting, but also receiving weather information appears to be up and running (see below), I have been unable to find a WWW interface that would offer this information. If someone is aware of such a service, please do mention it in the comments below.

Exaggerations by Aid Agencies and Journalists

During the past two winters, a number of aid agencies have frequently raised the alarm over dzud conditions. This is unfortunate. Just like crying “wolf!” will ultimately lead to a lack of vigilance, so will repeated claims of catastrophes make a response less likely when a real catastrophe hits.

Journalists, of course, have been eager to amplify these calls for action and attention to an unfolding catastrophe, presumably because humanitarian crises make for news.

One article at the end of February 2017 appeared under the headline “Severe winter killing off livestock in Mongolia“. If anyone read past the first several paragraphs, readers learned that “The current dzud has killed more than 40,000 animals so far, but experts say the worst is yet to come.” 40,000 animals dead? That would be an extremely mild dzud for any year. The statement that the “worst is yet to come” may be true, but is entirely speculative. This journalist, reporting from Beijing though he had previously travelled to Mongolia, most likely did not write the headline that appeared here. Given the headline, however, this is an article that is the journalistic equivalent to crying “wolf!” in my eyes.

Yet, no one really wants to come out and say that a dzud is not in progress. Who wants to claim that the wolf is really a sheep, after all, as there is some chance that it is a wolf and if animals are killed, the person questioning the cry of alarm would be partly to blame.

And it is not just journalists that respond.

Canada has provided $35,000 thru the Intl Federation of Red Cross Red Crescent Societies to Mongolian Red Cross to address the dzud needs. pic.twitter.com/yABSS4MWh2

By contrast, aid agencies should be much more responsible in raising these kind of alarms.

Look at this Feb 28 2017 screenshot of the Mongolian Red Cross Society: 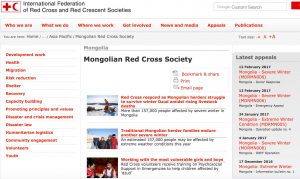 As we are heading into winter 2017-18, some alarm bells are being run already. In a conversation in Ulaanbaatar, I was told that this winter would be especially hard. When I asked what that prediction was based on, I was expecting some “farmers’ almanach”-like herder wisdom, or some astrological insight, but the explanation I got was, “From the internet”. Hm…

While MercyCorps project of SMS weather forecasts for herders seems a worthwhile initiative (at the glance that I’ve cast at it), the release of information about the initiative does seem somewhat tied to a look ahead at the winter that may bring disaster, again.

I certainly hope that more and better information will become available over time to allow careful observers to double-check alarmist news against indications of real crises. I also hope that some of the journalists and aid agencies involved will consider the long-term impact of their writing/appeals on this topic.

Julian Dierkes is a sociologist by training (PhD Princeton Univ) and a Mongolist by choice and passion since around 2005. He teaches in the Master of Public Policy and Global Affairs at the University of British Columbia in Vancouver, Canada. He tweets @jdierkes
View all posts by Julian Dierkes →
This entry was posted in Countryside, Grassland, Health, Policy and tagged Julian Dierkes. Bookmark the permalink.