The Vatican, Yemen, Antigua and Barbuda are only three of over 100 states participating in this year‘s Expo in Astana Kazakhstan. Even though the concept of an international exposition seems to be a little outdated in a globalized world, the Expo can be understood as a canvas of the host country‘s international relations. This is especially true when it takes place in Astana, where president Nursultan Nazarbayev uses every opportunity to draw attention to the “new Kazakhstan“ on a global stage. While reporting from the Expo-Plaza for several days, I noticed that pavilions of Russia, China and Azerbaijan were among the most frequently-visited. Of the neighboring Central Asian countries Turkmenistan and Uzbekistan contribute with their own costly pavilion, while Kyrgyzstan and Tajikistan have at least stands in the “Silkway Plaza“ (oddly, they share the space with Bangladesh, Armenia and Ukraine). 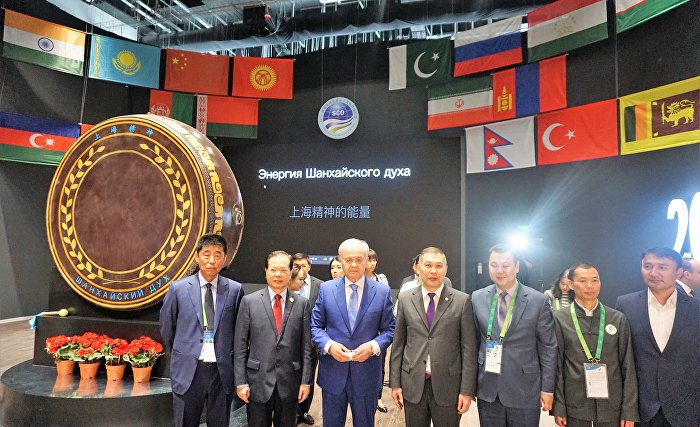 Yet the only visible Mongolian flag at the exhibition area is inside the equally bizarre pavilion sponsored by the Shanghai Cooperation Organisation, where it hangs next to the banner of Iran and Turkey (see image). So why did Mongolia not join this gathering of friends?

In December 2015 the Kazakh daily “Astana Times“ reported that the Mongolian Minister of Energy D Zorig signed a formal agreement to take part in the Expo during a meeting with the Kazakh ambassador – by that time only 20 other countries had officially confirmed their participation. It was highlighted by the Kazakh side that this could encourage talks about further cooperation in energy and infrastructure development as the official theme of the exhibition is “Future Energy“. But by the beginning of this year the narrative had changed: In an article, the Speaker of the Parliament M Enkhbold is quoted, saying that with support of the Mongolian National Chamber of Commerce and Industry, Mongolia might participate in the Expo. Six months later the name Mongolia vanished from the official homepage of the Expo. In an organizational environment like Kazakhstan it is not unusual to change plans at short notice, yet Mongolia’s absence does seem a bit peculiar. Enough so to have a quick review of the current state of Kazakh-Mongolian relations.

No Landing in Ulaanbaatar

The latest controversy between the two states was related to the planned construction of the new Kazakh embassy in Ulaanbaatar. So far, no agreement about a location could be obtained. Another strife dates back to spring 2016, when the Kazakh State Airline Air Astana canceled the only connecting flight between the two capitals after the authorities in Mongolia withdrew the permission to land without any given grounds. Then again, several bilateral talks between high officials were held in the last years aiming at deeper cooperation in the political and economic sphere. In February, the head of Kazakhstan’s national atomic company Kazatom visited Mongolia to talk about possible joint projects in the nuclear sector, as Kazakhstan is currently planning to diversify its nuclear business and both countries are dealing, or rather not dealing with a similar dependence on their fossil fuels. Astana’s approach to “future energy“ is closely connected to Russia’s declaration of nuclear energy as a “green“ energy, which also became manifested in Russia’s contribution to the Expo – sponsored by Rosatom, the Russian State Atomic Energy Corporation.

Resources are only one of many similar challenges the two countries are facing. Brandon Miliate elaborated on the general nature of the relations between the two countries three years ago on this blog: https://blogs.ubc.ca/mongolia/2014/why-its-not-about-stans/. He identifies a key issue in the balancing act of being a neighbour to both Russia and China at the same time. Naturally the two superpowers have little interest in a coalition of neighbours and thus try to encourage a certain level of competition. A recent example for this is China’s Belt and Road initiative where Mongolia has to deliberate on whether it wants to keep up its Third Neighbour policy and leave the field to Kazakh entanglement or try to become a logistical hub for China’s ambitions. In conclusion Mongolia’s absence at the Expo in Astana does seem to be just one of many incidents over the last years that indicate the two countries’ relationship-status as: it’s complicated.

Dénes Jäger (denes.jaeger@hotmail.com) is currently pursuing a Master’s degree at the Central Asia Seminar at Humboldt University in Berlin. Having studied and worked in Turkey and Kyrgyzstan he focuses on Turkish-Central Asian relations in his research and journalistic work.

Julian Dierkes is a sociologist by training (PhD Princeton Univ) and a Mongolist by choice and passion since around 2005. He teaches in the Master of Public Policy and Global Affairs at the University of British Columbia in Vancouver, Canada. He toots @jdierkes@sciences.social and tweets @jdierkes
View all posts by Julian Dierkes →
This entry was posted in Dénes Jäger, Foreign Policy, Kazakhstan. Bookmark the permalink.