“Авилгатай Тэмцэх Газар” (АТГ) or Independent Authority Against Corruption (IAAC) of Mongolia has been all over the media – some describe it as ‘useless’, ‘politicized’, some compare with the ‘До Яам’ (Mongolian equivalent to KGB) of 1930s, and others wish for the best in the АТГ’s fight against the corruption.

The Anti-Corruption Agency became a functional organization in 2007 under the Law of Mongolia on Anti-Corruption (2006) and has evolved to be a central law enforcement institution.  The first head (lawyer) suspiciously passed away, the second (police) was prosecuted for misuse of authority, the third (police/intelligence) requested early retirement just before the parliamentary election in 2016. Now, the current head (police) is walking on a tightrope.  The appointment procedure of head and deputy head have been clear and logical in the law.  The president nominates, parliament approves for a 6-year term avoiding the politicization due to presidential and parliamentary elections.  Three main criteria for the job are: (1) a lawyer by profession, (2) 10-15 yrs of prior government service experience, and (3) no political appointment for the 5 years prior to the appointment (Law on Anti-Corruption).  Senior officials of the Ministry of Justice, Police, and/or General Intelligence Agency usually meet these criteria and all past heads and deputy heads came from these judicial and law enforcement organizations.

Staffing and Areas of Focus 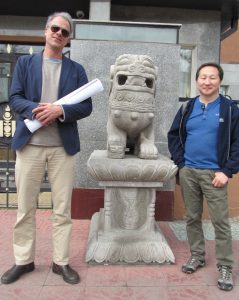 Similar patterns of recruitment are observed for staff positions at the IAAC. Despite standard professional criteria for recruitment, the most important requirement for the staff recruits is ‘no record of being investigated for corruption with disciplinary, administrative and criminal records’ (Law on Anti-Corruption). All staff must take an oath to combat corruption while receiving slightly more privileges and support from other law enforcement agency and public servants. The oath of the IAAC personnel, as stated in the Law on Anti-Corruption, “I, servant of the Anti-Corruption Agency, independent from any undue influence, swear to honestly combat corruption and will be guided solely by the law.  Should I break this oath, I shall be punished under the law.”

According to the IAAC statement, IAAC employees are paid 50 percent lower than judges and 1.5 percent lower than prosecutors.  If one follows parliamentary sessions and interviews of the IAAC heads, the organization is significantly under-staffed to conduct four sets of activities:

Moreover, the ATG, as an government organization, responds to inquiries of the president and parliament, conducts press conferences to keep the media and citizens informed, including via Twitter, and participation in international initiatives (e.g., OECD reporting).  The IAAC provides background checks for all candidates for parliamentary (~600-700) and presidential elections. Plus, the IAAC needs to be on top of any legal and policy initiatives (either drafting or responding to legislative and regulatory proposals) and must receive all reports coming from all government agencies under the National Anti-Corruption Strategy  by February.  The IAAC will collect them, compile them, and submit them to the Subcommittee on Special Control of the State Ikh Khural.  This is the only political institution, which oversees its funding closely.

These immense tasks would clearly challenge the staff of 145 (in 2014) and 172 (by 2017). However, the IAAC investigated 2207 criminal cases and only 233 of which has been prosecuted. Its investigative power appears to be curtailed by Prosecutors. Prosecutors at different levels can stop any criminal investigation and courts could return or delay cases – submitted by the IAAC.

The 2006 law also creates a public council (not paid) providing a forum for citizens to voice their opinion and to advise on implementation of the anti-corruption law.  Fifteen members of the Public Council (АТГ-ын Олон нийтийн зөвлөл) are appointed by the president for a four-year term. A key requirement for candidates is not being career public servant or holding government posts at the time of candidacy and during the four year tenure.  However, the selection process is still not clearly institutionalized.  Therefore, it is a double-edged sword for the IAAC: the Council can either increase pressure from the presidential office or increase public support from society.  At worst, it could also generate additional work hours for the small staff to accommodate their needs (esp., when populist ones search for momentum.

Because the Presidential appointed Public Service is supposed to represent the public interests, the IAAC also created another structure, which is called the sub-Public Council (Олон нийтийн дэд зөвлөл) in 2017.  The IAAC would appoint volunteers, mostly retired at organizational levels and would receive limited monetary incentives for their service supporting activities of the IAAC at their organizations.  Currently, the sub-Public Council have  about 108 members.

It seems premature to label the IAAC either ‘useless’, ‘politicized’, or ‘KGB-style’.  With such a small staff, the IAAC – institutionalized the legal, regulatory, and administrative of the anti-corruption efforts, increased public awareness and accumulated data base (esp., those signed income disclosure by public officials), and done the general mapping and identified ‘grey zones’ (esp., political parties and parliament).  However, the effectiveness of the anti-corruption in Mongolia appears to be totally dependent on the political will of politicians.  Are there courage and determination to combat against corruption?  Or, the majority of them want the IAAC remain at this crossroad and enjoy mocking ‘toothless АТГ’?

Jargalsaikhan Mendee is a Deputy Director of the Institute for Defense Studies of Mongolia. He holds a PhD in Political Science from the University of British Columbia, and MAs in International Relations from the US Naval Postgraduate School and in Asia-Pacific Policy Studies from the Institute of Asian Research of the University of British Columbia.
View all posts by mendee →
This entry was posted in Corruption, Judiciary, Security Apparatus and tagged MENDEE Jargalsaikhan. Bookmark the permalink.