In mid-February 2021, a mass testing program for COVID-19 called Neg khaalga – Neg shinjilgee (One Door – One Test; below abbreviated as 1D1T), was implemented in Ulaanbaatar. It was undertaken in reaction to the gradual spread of the COVIC-19 virus among the inhabitants of Ulaanbaatar since December 2020. Mongolia has largely prevented the domestic spread of the virus throughout most of 2020. However, in November the number of cases connected to citizens arriving from abroad (mostly Russia and Europe) started increasing and was followed by the country’s first community cases. Recent events have also uncovered growing tensions between the people and their government, surrounding the socio-economic impact of the preventive measures, alongside a feeling of lack of a wider comprehensive strategy to curtail the spread of the epidemic. The following text offers information on the recent developments surrounding the COVID-19 epidemic in Ulaanbaatar.

According to the Mongolian Statistical Information Service (MSIS) as of April 2nd, the basic COVID-19 numbers for Mongolia were:
8841 confirmed cases
3750 treated patients
5070 recovered
12 deaths
316,986 vaccinated

According to MSIS, new daily cases peaked at 575 on March 29th. On that day the Rt (effective reproduction number) value was 1.67.

Mass Testing and Bracing for a Pandemic

In reaction to the virus’ growing presence in the country in late 2020, a nationwide lockdown was implemented between November 12th and December 11th . In mid-November Darkhan-Uul aimag was first to carry out a testing program called Neg örkh – Neg irgen  (One household – One citizen), aiming at testing one individual per every household in the aimag. Before the end of November, the program concluded. In early December, Ulaanbaatar began testing its own citizens, targeting some 70 000 households clustered around outbreak locations in 40 khoroos (basic administrative units of the capital), through a program called Neg örkh –  Neg shinjilgee (One household – One test). The spread of the virus has not been controlled and further decisive action was required.

In February 2021 a follow-up to recent testing programs was announced. This time it was a mass testing campaign, supposed to reach every household in Ulaanbaatar. It was planned for February 14-22 with a total of over 411 000 households  to be encompassed. As with the previous testing programs, it provided a default of one test per household. This way households with confirmed infections could be put under observation and the potential disease spread between social settings unique to each of the household members could be at least partially prevented. The tests used were PCR swab tests whose results could be checked online based on one’s ID number. The assumption that one test per household would guarantee a complete or at least near complete image of the size and spatial distribution of the epidemic was in itself faulty. Additionally, the program had other shortcomings (e.g. using PCR tests for mass testing, omitting underaged household members) but it deserves recognition as an impressive logistical endeavour.

The choice of these specific days to conduct the mass testing program was not accidental. February 12th marked the Lunar New Year – Mongolia’s biggest holiday, usually accompanied by en masse home visits between family members and acquaintances. Both in 2020 and 2021, a strict lockdown was introduced for the period of the New Year and following days. This February, the lockdown of Ulaanbaatar lasted February 11-23.

The overlap of the lockdown and mass testing over the holiday period was a strategic choice which both made it easier to contain the spread of the virus in a very vulnerable period and guaranteed that considerable portions of the population could be expected to stay home allowing for a more successful identification of potential outbreak locations. As collecting samples was scheduled to end before the lifting of the city-wide lockdown it also allowed to identify the endangered households and put them into isolation or quarantine before society reentered the city. In this sense, the 1D1T campaign was also planned as an integral component of the citywide lockdown with February 23rd as its end date.

The main batch of tests, carried out February 14th to 22nd along a schedule which can be seen below, was preceded by tests in nearly 120 000 households clustered around 119 locations already determined as Ulaanbaatar’s COVID-19 ‘hotbeds’(30) and risk areas (89) based on previous tests and hospital admissions. 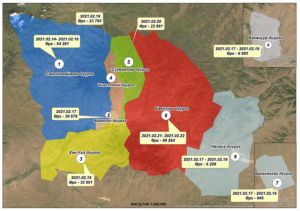 According to MSIS there were over 115 000 test carried out in Mongolia February 11-14 and a total of 415.879 tests were registered between February 11th and 25th countrywide. During a press conference briefing on the outcomes of the campaign, 523 000 citizens were said to have been encompassed by the testing campaign. The costs of the program have been estimated variously at 10 , 18,4  or 30  billion tugrik (between 1054 710 and 351 570 USD). Unaddressed discrepancies in such basic data as the number of tests and the costs of the campaign are factors contributing to a general atmosphere of insufficient transparency and information flow related to the authorities’ anti-COVID-19 measures.

Throughout the campaign 210 new infection cases were confirmed, some of them in 36 newly discovered outbreak locations. This outcome most likely means that, on top of the previously known cases (‘clustered’ in at least 30 of the 119 locations), 1D1T managed to establish 36 households in which anywhere between one and five people were infected with COVID-19. The gravity of the authorities’ narrative on the issue (in many cases single infection = outbreak) might seem exaggerated but one should remember it is precisely this kind of uncompromising approach that helped Mongolia stay COVID-free throughout most of 2020. 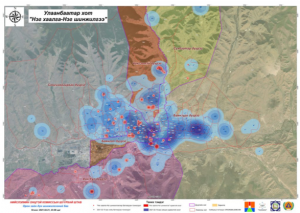 Simultaneously with 1D1T’s test results coming in, data collected being was mapped onto satellite images of the city using GIS software. This was not only to simply visualize the outcomes of the tests, but also to be used as a tool in the process of modeling the development of the epidemic and the possible responses to it. The map became the ‘face’ of the anti-COVID campaign in Ulaanbaatar – multiple versions were circulated on the Internet and acted as background for press conferences. 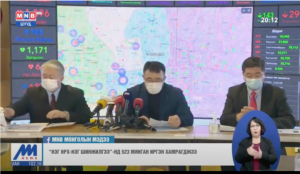 Fig. 3 Press conference on the outcomes of the 1D1T campaign.

The data gathered throughout February 11th to 22nd, is being constantly aggregated with follow-up test results (a few updated versions of the spatial visualization have been presented to date). As can be seen and should come as no surprise, the data informs a continuity in the spatial distribution of registered cases, but also dynamic increase in the number of outbreak locations.

According to Montsame’s video on 1D1T’s progress (dated February 21st i.e. towards the end of the testing period), 11 khoroos in three districts:
8, 16, 25, 26 in Bayanzürkh district,
2, 3, 6, 12, 13 in Chingeltei district,
16 and 18 in Sükhbaatar district were to be declared sites of increased risk of viral transmission.

Continuities observed in the data gathered since February 14th, led to officially announcing an updated list of areas of high risk. As of March 11th, the list included: 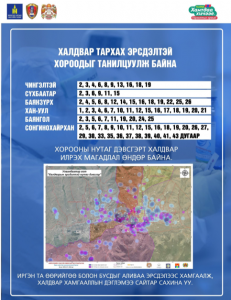 equalling 83 khoroos in six districts. Over 40 of them were ger district khoroos in which khashaa (courtyards) are the only or dominating land use mode. The list is subject to change , and a more recent version, shared March 23rd, contained (despite the virus’ rapid spread) only 48 khoroos distributed throughout six districts: 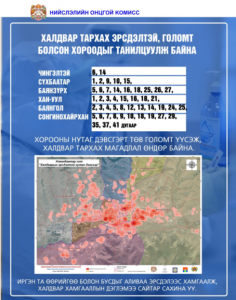 The second part of this text will discuss restrictions to mobility introduced in Ulaanbaatar and potential patterns of the outbreak locations’ distribution throughout the city. An extended version of both parts of this “Ulaanbaatar: COVID-19 as of March-21” summary/commentary along with other resources can be found at: https://ubstudies.wordpress.com/covid-19-in-ulaanbaatar/

Paweł Szczap is a Mongolist, Mongolian language translator and PhD candidate at the University of Warsaw. He mostly works with the Mongolian built environment and is currently researching Ulaanbaatar city maps and place names. He has spent over four years living in Mongolia and has on numerous occasions cooperated with the Ulaanbaatar City Museum. Previous works include research on Mongolian nationalism and the cultural impact of mining among others. He is currently developing two online projects: Ulaanbaatar Studies and Mongol hip-hop.

Julian Dierkes is a sociologist by training (PhD Princeton Univ) and a Mongolist by choice and passion since around 2005. He teaches in the Master of Public Policy and Global Affairs at the University of British Columbia in Vancouver, Canada. He tweets @jdierkes
View all posts by Julian Dierkes →
This entry was posted in Health, Paweł Szczap, Public Policy, Ulaanbaatar. Bookmark the permalink.