He says, the legal environment that concerns the children with disability is changing in many ways in Mongolia. For example, over a decade ago people with disabilities were called “impaired and incomplete” (тахир дутуу) even in our law. It has been changed to “disabled citizen”, though he much prefers “differently abled”. Also, the education law changed to allow kids with Down syndrome and other disabilities to join regular schooling, and not just special schools with other disabled kids like before. However, he further explained that the international trend is moving from “disabled” to “differently abled” since we all humans have different strengths and abilities, as well as weaknesses. Inclusiveness and an inclusive society are important notions that many countries are striving to implement/realize, and they are principles championed by Mr. Ganzorig and his organisation.

One of the stories that Mr. Ganzorig shared from the time when people were not aware: After having been interviewed, a journalist published an article on the newspaper, referring to the Down syndrome as “daavuun” (bedsheet) syndrome. However, journalists nowadays publish stories that are not only well researched but can also expand public’s knowledge on the issues. Our guest further explains what Down syndrome means for children born with an extra chromosome. The common type is Trisomy 21 – or T21, meaning that each cell in the body has three separate copies of the chromosome 21 instead of usual 2 copies. There are different, less common types of Trisomy 21 which are called Translocation Trisomy 21 and Mosaic Trisomy 21. In addition to these variations, he says, the severity of the case also differs as some children have fewer characteristics of Down syndrome and are almost similar to children without genetic anomaly, while others have far more severe developmental difficulties. He says that “you can also tell children with Down Syndrome by their physical signs, they have slanted eyes, cute noses and much fairer skin”.

Although it is possible to carry out the diagnostic test and conduct fetal scans, we are not sure why children are born with it. Neither food, environmental factors nor race have been proven to play a role. According to our guest, if a researcher can establish why this occurs and how many different factors play a role, they will surely be awarded a Nobel Prize. Furthermore, he shares the statistics that Down syndrome occurs in about one in every 800 babies[1]. This means there should be several thousand children in Mongolia, but he has seen only two or three adults with Down syndrome in Mongolia. So, he is worried that more kids are hidden at home due to shame and social discrimination. In addition, there is no infrastructure to support those children and their families in Mongolia when they go out. Moreover, he adds, many of the children born with Down Syndrome have congenital heart disease or other diseases, and often they have a much shorter life expectancy in Mongolia.

[1] In general 1 in 800 babies in Canada and America has Down syndrome.

He often is contacted by parents and guardians on social media who seeking help and asking for advice. His number one advice to parents, grandparents, and in-laws, is not to blame anyone. No one is at fault. The Down Syndrome is not genetically passed down, but many young couples break up being unable to accept it. In addition to these emotional and psychological challenges, families also struggle with financial difficulties. He says that one of the parents often must bear the financial responsibility while the other, often the wife, stays home to take care of the children. It can be an overwhelming burden on the breadwinner, “you cannot get sick, you cannot die”, he says. Another common yet heartbreaking story of parents is about their often shared wish not to die before the child, as there would not be anyone else, or anywhere else that the child could get support and the care they need.

He says, “I advise parents that accepting their children is the first step, and once you accept them, you will see that your child is so much more”. He observes that parents in developed countries are increasingly choosing to birth the baby which often would have been aborted in previous decades.

In the case of Mongolia, Mr. Ganzorig shares that the conditions are improving little by little, as we have Gyals Medical Center, which provides discounted diagnostic testing for the children, compared to a decade ago when parents used to send the tests to Israel for diagnosis. 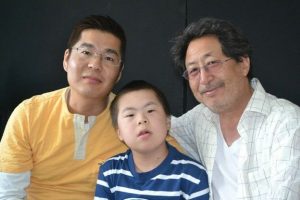 Photo: Mr. Ganzorig (with the permission of Ganzorig)

The number one thing that can improve the lives of the people with Down syndrome is a change in the public attitude. When we asked how it could be done, our guest explained that “getting involved” is the most effective way to change attitudes and we all have “individual social responsibility” just like the corporations. In the case of Mongolia, volunteering and public participation is not a strong part of the culture though it would be impactful in changing the lives of many. The community that supports the livelihood of children and citizens with Down syndrome is limited to parents and family members.

According to a survey conducted by the Down Syndrome Association of Mongolia’s, people who hurt the parents most were the physicians. He shared one mom’s story, who was told by their physician to prepare the funeral right away when the baby was still little. However, now that child is a special Olympic medal winner, and the mom is a happy mom. Mr. Ganzorig says that it is the awareness and acceptance of the individual physicians of course, but it further shows that resources are not dedicated to the training of these doctors. And it is not only about doctors, but also there are stories of how teachers are resistant to receive students with Down syndrome because they feel incapable of training and educating these children.

The Down Syndrome Association of Mongolia has translated many handbooks and materials from different resources and shared them with general physicians and, has been working with its international partners bringing in teachers to train schoolteachers.

In talking about changes in public attitude, our guest shared that we are talking about discrimination and pity. Pity has as much impact as discrimination in severing the persons’ ability to engage in society and live independently. Pity does not only come from the society. Even some caretakers, whether it is parents or family members, they also feel pity for the children with Down syndrome, further disabling the kids to gain independence and learn other necessary skills.

The Down Syndrome Association of Mongolia has been working with several international and domestic organisations to create more opportunities of employment for those who have Down syndrome, though the road has not been easy. He shared his vision of creating employment opportunities for citizens with Down syndrome. The association considered opening a coffee shop that is competitive and delivers value to the customers and is not a “pity” and “charity” leveraged business.

Our guest shared that he and his organisation have been working on initiatives to enable those children to work. He says, “the work is not only about income, it also means a morning walk to your work, having colleagues and a lot more social interaction” than if you were at home. Children with Down syndrome and rather mild symptoms can attend kindergarten and schooling, but as soon as they reach adulthood these children are excluded from society. And it’s not only about the exclusion, but there is also really nowhere they can go in Mongolia if their parents or guardians pass away.

In many other countries, a person with Down syndrome can work in the service industry, maybe in the mailroom, in coffee shops or even act in a movie. However, in Mongolia they end up being locked up at home. Mr. Ganzorig and the Down Syndrome Association of Mongolia, have established a vocational training center and a coffee shop, so that kids can learn how to work with money, and acquire basic social etiquettes. He is proud that some children are already working in the Asia Foundation, one of Oyu Tolgoi’s supplier companies, and the Shangri La Hotel. He mentioned that even our public service is considering hiring, as he got a call from a department director of the Ministry of Culture of Mongolia inquiring to hire an individual with Down syndrome.

Due to COVID-19, the association has closed the vocational training center. Children with Down syndrome often have a weaker immunity system, though in some countries they are being advised to be vaccinated, specifically with the Pfizer-BioNTech COVID-19 vaccine. The economic impact of COVID-19 has been severe, not only for the families with children with Down syndrome, but all disabled communities. As a result of the COVID-19 related measures, many organisations have closed their doors or reduced the salaries, which leads to struggle for those who all have disabilities. Mr. Ganzorig said “my wish is to create a society where all the individuals can live independently in Mongolia”.

Jargalsaikhan Mendee is a Deputy Director of the Institute for Defense Studies of Mongolia. He holds a PhD in Political Science from the University of British Columbia, and MAs in International Relations from the US Naval Postgraduate School and in Asia-Pacific Policy Studies from the Institute of Asian Research of the University of British Columbia.
View all posts by mendee →
This entry was posted in Bulgan Batdorj, People with Disabilities, Podcast and tagged Batdorj BULGAN. Bookmark the permalink.