Our guest is E. Enkhzul, a teacher at the 116th school – the only school for the visually impaired and blind children in Mongolia. Having worked both during the socialist and democratic periods, Enkhzul shared her insightful views full of contrasts.

In 1987, a young graduate of the Mongolian State Pedagogical University (now Mongolian State University of Education) needed to face her fear of working at the 25th school, known as a school for children with intellectual disability. Otherwise, she would be assigned to work in a remote rural school. When she was studying at the secondary school, parents and even teachers used to threaten kids with sending them to the 25th school if they would not behave or study well. People spread rumors telling ugly, frightening stories about this school. So, she decided to teach there with the hope of being assigned to a different school whenever the opportunity would arise. The first year was hard, she recalls, all previous misconceptions and prejudices kept her scared and even pushed her to quit. However, experienced senior teachers and the beautiful, smart children motivated her to teach for now over 34 years, and she still loves to teach. 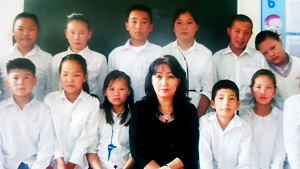 Photo: Enkhzul with her students (with the permission of Enkhzul)

Special Education During the Socialist Period

Special schools were established in the 1960s. Core faculty members were educated in the former Soviet Union and, on a monthly basis, specialists from the Soviet Union used to run workshops and seminars for Mongolian teachers who were working in the special schools. At that time, there were no special training programs or courses on teaching children with disabilities at the Mongolian State University of Education. Therefore, teachers assigned to work in special schools, were coached by senior teachers and specialists from the Soviet Union. Also, a nation-wide survey on children with disabilities was jointly conducted by three ministries (Ministries of Health, Education, and Social Welfare) on a regular basis. Covering all soums and city districts, the survey would present the exact number of children with disabilities and the type/degree of disabilities. Based on this data, the student and teacher ratio was determined by the Ministry of Education. But things got worse during the political and economic transition periods of the 1990s.

From 1964 to 2007, both, children with visual and children with hearing impairment used to go to the 29th school. Then, in 2007, the 116th school was designated for the visually impaired children, while the 29th school was designated for hearing impaired children. The school programs of these schools are similar to those of other public schools; therefore, students take the general exam to apply to post-secondary schools. Children with intellectual disabilities have different programs. Enkhzul, who is teaching elementary school students, Enkhzul explains that children with disabilities can have multiple disabilities. For example, six of seven students in her class have other types of disabilities (e.g., autism, cerebral palsy) in addition to visual impairment. Therefore, a teacher’s workload at the special schools is heavier than that of the teacher at a public school. Each student requires a specific pacing and teaching methodology. This requires having an assistant teacher even for a class of four or five students.

Advice to Parents – Education is Important

The most important thing is to observe your children from an early age and to assess their behaviors, physical skills, and linguistic development. Parents should seek advice from family doctors and specialists on how to assess and help their children improve their skills. Many parents loose valuable time and loose the momentum for their children to develop self-help skills and social skills. As Enkhzul sighs, it was incredibly sad to see ten-to fourteen-year-olds joining the elementary schools because they did not go to school at the age of six or seven. Some parents are afraid to send their children to special schools because they presume that their children cannot live away from them. This is understandable, especially for those who live in the countryside. However, some parents want to keep their children so that they can work for money or carry out the household chores. It was common practice during the economic hardships in the 1990s. But parents should understand that these children are entitled to study, and for many, education is key to unlock their talents. 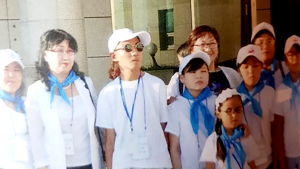 Photo: Enkhzul with her students (with the permission of Enkhzul)

A Story of Her Student

One story, she shared, was a good example of the role education plays. There was a girl, who lived in the ger district of the capital city. Her dad was unemployed and an alcoholic. The only breadwinner in the family was her mom, who was a tailor and was working the nightshifts in a textile company. The girl was overwhelmed with the tasks of looking after her brothers and sisters, housekeeping, helping her mom overnight, and going to school. Sometimes, she did not show up for her class. Enkhzul insisted and almost forced her to take the final exam for the 9th grade, so she could get a certificate and apply for jobs or vocational schools. Luckily, she graduated from secondary school and then finished vocational school. Many years later, she invited Enkhzul to her house and introduced her family and a new apartment, which they bought after having worked in South Korea. This was, as Enkhzul stresses, one of the happiest moments of her life.

The children with disabilities are hit hard by the COVID-19. Unlike public school students, visually impaired students cannot learn through the government-run tele-education. For example, some areas do not receive the channel (e.g., Ekh Oron channel) which delivers the tele-schooling for the third graders. Many children do not have access to computers and the internet. Students with visual impairment need to use their phones to listen to their teachers, but many of them do not have sufficient data. The students of the 116th school have been comfortably learning through touch, but now they may begin to lose these special skills. Hence, the teachers are expecting an immense workload to help students catch up and overcome these challenges.

There Is Progress, But…

In comparison to the 1980s, much progress has been made. People are gradually changing their views about children with disabilities. A new law was passed to promote inclusive education. This is extremely helpful for children with disabilities, as they can now transfer from the special schools to join public schools. In addition to Russian specialists, teachers have been working with specialists from Japan and South Korea. Many international organizations are providing support to special schools. Early diagnosis and rehabilitation have been improved, but many challenges remain. Only two of six special schools have lifts while all other public schools do not have lifts – so, how can we promote inclusive schooling? There are many nice talks about the barrier free environment, however, ultimately standards are not complied with, and it thereby remains a lip service. Some accessibility roads are even dangerous for anyone who would use them. Looking at these half-baked, crude attempts is heartbreaking. The state officials need to enforce their laws and standards because these children with disabilities are carrying a load bigger than themselves.

After working for over 34 years, Mrs. Enkhzul still always loves to talk about her students. And she told us that she worries about their future, especially about whether they will find jobs and make a living. Throughout the interview, she repeated that these beautiful children captivated her and she overcame the prejudices that she held against the children with disabilities, particularly regarding the 25th special school during her formative years. She did not leave her job, even during the economic difficulties of the 1990s when the school could not pay their teachers on time.

Jargalsaikhan Mendee is a Deputy Director of the Institute for Defense Studies of Mongolia. He holds a PhD in Political Science from the University of British Columbia, and MAs in International Relations from the US Naval Postgraduate School and in Asia-Pacific Policy Studies from the Institute of Asian Research of the University of British Columbia.
View all posts by mendee →
This entry was posted in Education, Health, People with Disabilities, Podcast, Uncategorized and tagged MENDEE Jargalsaikhan. Bookmark the permalink.