A short thread????on Chinese social media intrusion on Mongolian twittersphere. This past July I noticed and started to track the surge of Inner Mongolian (Chinese) accounts here on twitter. So far I have listed around 30 accounts that regulary feed and tweet to Mongolian public pic.twitter.com/qHa9HNpDEZ

A close look and interactions with some suggest that these are media professionals working for Chinese Party-state media on a mission to tell China’s stories well. While one could recognize the imbalance of reporting on China in the global media landscape dominated by Western media outlets and understand China’s efforts to match its perceived power in global discourse, the way these are done in countries with fragile media systems is alarming. Like many other developing countries with democratic institutions and a relatively free media system, Mongolia is a testing-ground for foreign – in this case Chinese – media professionals where the sky seems to be the limit.

On October 17th, just three days later after I published the twitter thread mentioned above something remarkable happened. The twitter account Ордос охин – A Girl from Ordos, with twitter handle @Otgontsetseg88 posted a video of a Khorchin Inner Mongolian girl commenting on prejudices she and other speakers of Khorchin dialect/accent endure from other Mongolians with ‘proper’ and probably more dominant versions of  Mongolian – unclear who the video was intended to. 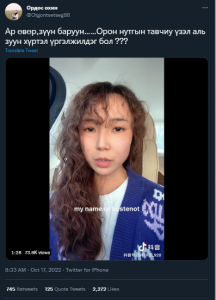 Now, I cannot comment on the origin and the purpose of the video since it was taken from a personal douyin account – a version of tiktok that is only available in China. Since in the original video, the girl singles out her Khorchin dialect but not the ‘Inner Mongolian accent’ at large which would be target of prejudice in Mongolia, one can conclude that the video was not intended to Mongolians of Mongolia but to other Inner Mongolians of China.

The account that posted this video is, however, one of many Inner Mongolian accounts that appeared in recent months that my original twitter thread was referring to. This particular account was created in June 2022 and through my monitoring of this and a number of other accounts, I noticed that it was briefly ‘restricted’ in early September to reappear again in late September.

Then a strange thing happened. The same day at 14:58 an unnamed account with twitter handles @szzs retweeted the post followed with a series of tweets targeting actors of Mongolian comedy dramas (хошин шогийнхон) for contributing for years to the language prejudices towards Inner Mongolians that were talked about on the video. It was later revealed that this account is run by a state secretary in the Ministry of Justice and Home Affairs, P.Sainzorig.

As the original video went viral by Mongolian standards with 747 retweets, 125 quote tweets and 2279 likes, all big names on Mongolia social media chimed in the discussion, including former PM Sanjyn Bayar, Demberel Sambuu and Ider-Od, among many others. As Sainzorig’s tweet was intended for comedy drama actors, the video then turned into a weapon of public condemnation of a particular type of Mongolian comedy drama as a genre and its performers past and present. This instigated collective action championed by some of the leading comedian-actors in Mongolia to clear their names, demanding an apology of which they considered a breach of the constitution in ‘discrimination by profession’. For nearly two days, the scandal dominated the Mongolian media environment, reappearing on different social media platforms.

It should not be an overstatement by now to state that the media, particularly social media, plays a key role in everyday public discussion in Mongolia. Social manipulation in all forms, under different names – publicity, communications and public relations (PR) – are regarded normal processes where a portion of media professionals with an unsolved issue of financing either carry out services for different interest groups or already operate as mouthpieces of some others.

Phrases such as сошиалаар ажлаа хийнэ – public offices work through social media, сошиалаар сэвнэ – to disseminate (manipulate) information through social media both from public or private offices, хар пиар – black PR and хөлсний бичээч – hired writers/commentators are all too familiar everyday lexicon in Mongolian public discourse. In short, social media scandals are a daily phenomenon in Mongolia so much that each day is expected with one or more socially-engineered or accidental topical scandals where everyone awaits to discuss.

Beyond domestic activities, It has been asserted regularly in different circles that there are foreign influencing operations present in Mongolian media landscape, specifically from Russia – through active measures активные мероприятия with number of ‘Russian trolls’, though not much concrete work has been published and without evidence still exist in the corners of conspiracy.

The recent twitter activities in Mongolia are just one avenue of coordinated communication coming out of China through social media. Considering a very dense concentration of Mongolians on social media platforms, specifically on facebook with a whooping 103% of its total population according to one report, it is one of the go-to arenas if one decides communicate with Mongolians.

The case I presented should be seriously considered as one of direct communications from foreign party state media professionals, engaging with Mongolian public, stirring up public debate to the level of generating social scandal and in effect undermining the ‘public sphere’ that is necessary for healthy democratic public discussion. One should also note that Mongolia is not the only country to receive increased information outflow to its direction. In the past months, some reports have appeared tackling the similar issues of increased information circulation on Xinjiang influencers by Australian Strategic Policy Institute as well as on China’s media presence in Kyrgyzstan by OSCE, among others.

Our hero, a girl from Ordos has doubled her audience since the incident, reaching 4,846 followers and continues to engage with Mongolian public with all sorts of Inner Mongolian popular culture items as of October 23rd.

Julian Dierkes is a sociologist by training (PhD Princeton Univ) and a Mongolist by choice and passion since around 2005. He teaches in the Master of Public Policy and Global Affairs at the University of British Columbia in Vancouver, Canada. He tweets @jdierkes
View all posts by Julian Dierkes →
This entry was posted in China, Inner Mongolia, Manlai Nyamdorj, Mongolians in China, Social Media. Bookmark the permalink.