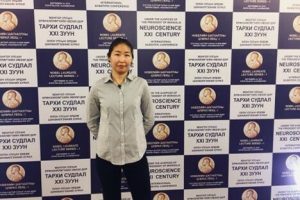 Our interview immediately led us to address the most difficult issue for people with epilepsy in Mongolia – getting the necessary medication. There are about 70 types of different drugs for epilepsy, of course, depending on the type, severity, and frequency of epilepsy. But only a few of these medicines can be obtained with a prescription while the Mongolian government authorities, especially the Ministry of Health, are reluctant to approve the imports of other medicines. This causes two types of challenges. First, only a few of these medicines were approved, but most of them could not be covered by the social welfare benefits for the people with disabilities because they are not approved and included in the list of essential medicines . Second, people search and buy these medicines at the highest cost since they do not want to see their loved ones suffer from the frequent seizures. Furthermore, since most of these medicines are not approved, people import them illegally. According to Batzaya, the number of people with epilepsy is increasing while the age of the people who are being treated as patients is decreasing. Whenever she visited the doctor, she used to run into two or three people. Now she expects a long line and sees mostly young parents with small children. The clinic, Batzaya is referring to, is Alfa Dolgion, the only epilepsy outpatient clinic in the country. It was nice to hear about this special clinic and their doctor D. Bayarmaa, who advises Batzaya. Both are working together to fight for the approval of more medications for epilepsy.

In one of earlier interviews of M.D. Bayarmaa, she stated that there are about 8,900 patients registered at the Alfa Dolgion Clinic, and 2,300 of them were more frequent visitors (link). Even though there are no government statistics, people with epilepsy are included in 30,000 ~ 40,000 people with intellectual disabilities. But doctors and activists/people like Batzaya are fighting to promote the understanding and to define epilepsy distinctively within the intellectual disability categories. Because of similar efforts, Down syndrome and autism are redefined, Batzaya explains. A person with epilepsy can learn and work like any other person until that specific health condition triggers seizures. Therefore, if people know about the specific causes, they can eliminate the seizures with the help of medicine or assistance from others. From 2015, the Mongolian Neurological Association and Association of Parents with Disabled Children together have celebrated the Purple Day – Supporting Epilepsy Around the World – and organized several informative events for the public. Batzaya was so enthusiastic about her involvement in the awareness work. These events were usually organized at a number of secondary schools, while welcoming representatives from neighbouring district schools. According to Batzaya, these school children are very curious and open to learn about epilepsy. However, she observed that people above the age of 25 are not so open to talk about epilepsy. If that is a popular attitude, this would be a sad fact, because it is mostly people above this age who make the decision on whether to employ or work with someone with epilepsy. 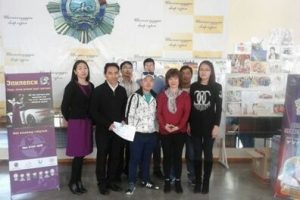 Photo: Ms. Batzaya first from the left (with the permission of Batzaya)

Through the social interactions, people with epilepsy of any age – from kindergarten to adulthood – will reduce their anxiety and overcome their suffering. The more isolated from society they are, the more difficult it is for them to cope with epilepsy. Parents are afraid to let their children go to the kindergarten, either because they fear that their child will get hurt or because they avoid it out of embarrassment. According to Batzaya, everyone involved – teachers and parents – need to be open-minded about including children with epilepsy in kindergartens and all other types of schools. This works in two ways: (1) it will weaken, or eliminate, the conditions that cause frequent seizures of children with epilepsy and (2) it will create a learning environment for all other children to learn and work with children with epilepsy. Similarly, many employers do not want to hire a person with epilepsy because they do not know how to create an environment for these people, nor do they want to accommodate their needs. In fact, they do not understand that people with epilepsy are able to work like any other person. These people would contribute to the society by working rather than hiding and relying on the little social welfare benefits. We agree with Batzaya – not letting the people with epilepsy work is against the principle of an inclusive society.

One remark that did strike me during this interview was directed at the Ministry of Education. The Ministry,  and regional and district offices have been reluctant to talk about the inclusive education and educational opportunities for people with disabilities. This point has been raised by several of our guests. Even though the respective law was passed to provide post-secondary and graduate education free to people with disabilities, the authorities have done little to implement it. Here we should highlight again Batzaya’s concern – whether the Ministry is intentionally silent or too busy. 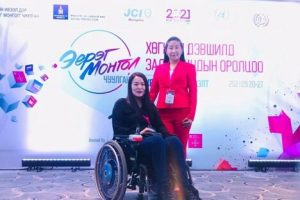 Photo: Ms. Batzaya first from the left (with the permission of Batzaya)

As our conversation comes to end, Sainaa posed two questions. One was about how Covid-19 has been impacting the lives of people epilepsy. Batzaya reiterated the challenge of finding medication. Medicine became scarce due to the delayed imports and therefore also expensive. Furthermore, some people could not get the right (meaning with potential side-effects) vaccines because of the potential side-effects. Hence, many people with epilepsy, especially those who haven’t been vaccinated, will be vulnerable to Covid-19.

The other question was about which approach to take in order to help people with epilepsy. As Batzaya advises, we should be open-minded about people with epilepsy and try to learn more about their health concerns. If someone falls to the ground, please don’t ignore them, even if they are badly dressed or appear to be drunk. You might be mistaken, it could be someone with epilepsy suffering from another seizure. You should provide first aid or help them to breathe and to get more air and space. Of course, authorities should be informed. Moreover, the police needs to be briefed and receive training in order to be able to recognize epilepsy and distinguish its symptoms from the ones of an intoxicated person. In a nutshell, we should welcome children and adults with epilepsy with open arms to create an environment in which they don’t feel intimidated or embarrassed.

Jargalsaikhan Mendee is a Deputy Director of the Institute for Defense Studies of Mongolia. He holds a PhD in Political Science from the University of British Columbia, and MAs in International Relations from the US Naval Postgraduate School and in Asia-Pacific Policy Studies from the Institute of Asian Research of the University of British Columbia.
View all posts by mendee →
This entry was posted in Human Rights, Mendee Jargalsaikhan, People with Disabilities, Podcast, Uncategorized and tagged MENDEE Jargalsaikhan. Bookmark the permalink.