Untold 25: A Better World for All Children

Ms. Tuyajargal is a journalist by profession and a mother of three children. Her middle son, who was born in 2005, had been found to have special needs in 2007 and needed all-round care. Going to hospitals and looking for a kindergarten for her son was tough. As a socially active mother who experienced the hardships faced by families with children with special needs, she wanted to do something to help. So, she founded the Merciful World NGO in 2009 and has been working at the organization since. Their first work was setting up a kindergarten class in a local kindergarten that provides equal education for children with disabilities. The main purpose of the Merciful World NGO is to help children with disabilities to grow up to be independent individuals within society who can take care of themselves well and help others. There are around 12,000 children with disabilities in Mongolia whom they hope to help. Currently they are operating a children’s development center called Enerel, founded four years ago with a sponsorship from MCS Estates LLC. To help fund the development center, they also set up a stuffed toy factory called Honey. 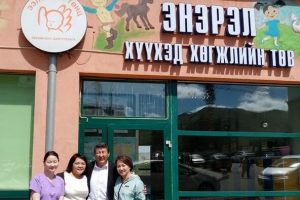 The Merciful World NGO is also working on influencing the policy and legal environment regarding children with disabilities and their caregivers. Ms. Tuyajargal emphasizes that supporting the caregivers is essential to support the development of children with special needs. In the early days of the organization, she recalls that they used to receive many calls from families asking for help with financial hardships. She acknowledges that compared to the weak state support provided then for families with children with disabilities, things have gotten much better in terms of financial assistance from the government. Based on a study they conducted, they found that many of these families are engaged in making handmade crafts such as traditional felt making or jewellery while taking care of their child or children and, their main challenge is selling their crafts to earn income. Since 2011, they were looking for ways to support the families and caregivers to solve this situation when the first order came in from a charity foundation founded by Jackie Chan, asking if the families could make 500 stuffed toys. The order was successfully carried out despite having little experience with the process of making stuffed toys. After this experience, there were talks to not pursue this line of production because of the extensive work and input required to make each toy. However, they decided that manufacturing stuffed toys was the best option to pursue considering that from a sale of one toy the profits can be divided among four people based on their different roles in the process such as tailoring, stitching, stuffing, and decorating. Most orders came from organizations such as museums, hospitals, or companies, who wanted to support their initiative. From 2011 this ‘micro-household factory’ with 120 people had grown to the size of a factory under the name Honey in 2018. Due to the pandemic, there are many unforeseen challenges such as the decrease in sales and cuts in income. Ms. Tuyajargal reflects on this initiative as a major success in terms of financing the operations of the Enerel Development Center while providing financial support for caregivers and families whose incomes has been supplemented by the project. Interestingly, Ms. Tuyajargal shares that the origins of stuffed toys can be traced back to the 1900’s to a German woman with disability. 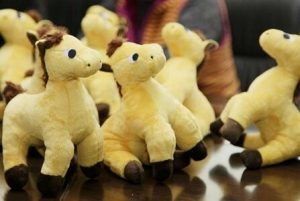 Ms. Tuyajargal shares that having a Child Development Center for children with special needs was a long-time dream and she and her team would advocate for support and meet with government officials and parliamentary members every year. Despite the law stating that all children regardless of disability or other factors have an equal right to education, the reality is not so accommodating.  For children under six years of age, the special needs classes or programs can be incorporated into local kindergartens, but for those over six years of age, there is no place to go for public education. The MCS Estates Company has generously provided them with a place to run their Enerel Child Development Center, which Ms. Tuyajargal says was “a dream come true”. As they provide comprehensive services for all the needs of the children who come to the center, they are the only one of their kind in Mongolia. The center has two main groups, one is for children that need physical treatment or care and the other is for children with mental disorders who are trained from an early age to become workers at the stuffed toy factory with occupational training. On average, there are 12-15 children in group one and 10-12 children at the center every day. Based on their limited resources, including the availability of teachers and space, they are working at full capacity. Support from the government has been minimal and despite laws stating that there should be support from the state, there is no substantial response. 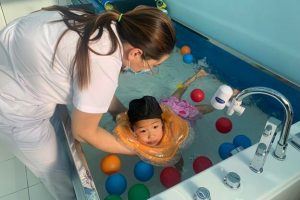 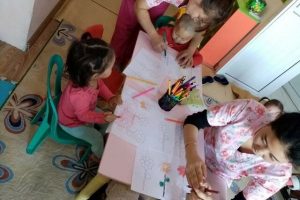 One of the biggest challenges Ms. Tuyajargal identifies in the country is the shortage of professionals in Mongolia, specifically, in professions such as Occupational Therapy. Due to the lack of such essential professionals in the country, many problems arise that stem from it. The most essential person who can help a child with special needs is an occupational therapist. She underscores that there are various government support services and projects that focus on providing employment opportunities for people with disability. Yet, there is little support for education and training for professional fields such as occupational therapy and other care workers who can make a substantial difference in helping people with disability to lead a better life. With this strong conviction, Ms. Tuyajargal is studying to become a professional occupational therapist herself. In terms of having their concerns heard by the government, people with disabilities and organizations advocating their rights and needs have a strong voice in Mongolia. However, Ms. Tuyajargal feels that when government or officials change, the dialogue has to start all over again and there needs to be improvement in substantive support. They hope to establish more development centers around the country in the next few years but are mostly dependent on the government support for expansion. Ms. Tuyajargal shares a story about how when they went to the local clinic during the pandemic, she noticed how some people would treat or even look at her son differently, and resolutely states that she will keep doing her work alongside her dedicated team.

Author: Degi Bolormunkh is a young professional with a multi-disciplinary education and a diverse background. She is a recent graduate from the Master of Management program at the UBC Sauder School of Business. She completed her B.A. in Combined major of Political Science and Philosophy with a minor in International Relations from the University of British Columbia. She has lived in multiple countries and has developed a keen interest in issues surrounding DEI, social and political inequality, and good governance.

Jargalsaikhan Mendee is a Deputy Director of the Institute for Defense Studies of Mongolia. He holds a PhD in Political Science from the University of British Columbia, and MAs in International Relations from the US Naval Postgraduate School and in Asia-Pacific Policy Studies from the Institute of Asian Research of the University of British Columbia.
View all posts by mendee →
This entry was posted in Education, People with Disabilities, Podcast, Social Issues, Younger Mongolians. Bookmark the permalink.