Our guest Sambuudanzan Ganzorig lives in Arkhangai Aimag, approximately 430 kilometers away from the capital city, Ulaanbaatar. He is the President of the Federation of Associations of People with Disabilities in Arkhangai Aimag. Sambuudanzan is also a renowned athlete with two gold medals from the Para Athletics Grand Prix in 2013 (Beijing, PRC), a silver medal from the Asia-Oceania Championship 2016 (Dubai, UAE) and a national record holder for shot-put and discus throw in national parasports championships. Moreover, he coaches Arkhangai’s weight and powerlifters while running a fitness club.

Competing in para sport events, he is well-travelled and inspired many to exercise and compete in national paralympics and the Paralympic Games. Today it is not a surprise for the Mongolian weightlifting community to see athletes from Arkhangai Aimag coached by a person in a wheelchair. Sambuudanzan agreed to share his insights on people with disabilities, on running non-governmental organizations, and, of course, on sports in the countryside. 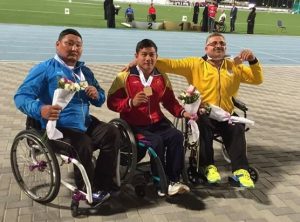 Photo: Sambuudanzan winning a medal from Para Games (with the permission of Sambuudanzan)

People with Disability in the Countryside

‘Getting information is not a problem in the countryside, especially in the aimag center,’ said Sambuudanzan, ‘but the infrastructure accessibility is a major challenge.’ People who live in the aimag center have more opportunities than those who live in the soum centers or in the countryside. At the aimag center, people with disabilities can go to the local administration, stores, services, and obtain needed information. In contrast, those in remote areas lack these types of opportunities. For them, it is even difficult to come to a regular social benefit qualifying meeting in the aimag center. It is a requirement for people with disabilities to meet with experts in order to qualify or to continue receiving their benefits on a regular basis. Because of remoteness and lack of information, people with disabilities do not know their rights, or even do not have control over their welfare benefits. Sambuudanzan stressed the importance of the education of people with disabilities for understanding their basic rights to protect their rights. However, in the countryside, parents usually decide not to send their disabled child to school. Schools in aimag and soum centers do not have accessible roads, washrooms and/or lifts for disabled children. To have their children enrolled in the school, one of the parents, or both, has to accompany their child to the aimag or soum center. But many choose to send their healthy child to school and tend their cattle with their disabled child in the countryside. This prevents the disabled person to get an education and to reach self-empowerment. Self-empowerment is the most important aspect for people with disabilities to protect their rights and change their attitudes, as our guest repeated throughout the podcast.

Employment in Aimag versus Soum

To provide employment opportunities, the government provides financial assistance for disabled people to make handcrafts and gifts. According to Sambuudanzan, this is not working in all local contexts. The gift-making is seasonal and different in regions and aimags depending on the development of the tourism industry. Instead, the government could support businesses with potential markets. For example, in a soum center, a person who repairs cellphones could serve for 40-50 households. Or another example could be a photo studio for passport and ID photos. These are jobs could be done easily by disabled people.

Then, we talked about the new amendment of the Law on Labour. The new amendment requires any business entity with 25 employees or more to hire one disabled employee, or, to pay the penalty to contribute to the employment fund for disabled people. This would not be applicable here, as Sambuudanzan explained, because there are very few businesses with more than 25 employees in the aimag center. All businesses in soum centers are much smaller. At the same time, the enforcement of this law is weak. There is a no clear mechanism for non-governmental organizations to monitor the fund. Echoing with our earlier guests, Sambuudanzan emphasized the creation of modified employment positions requiring less assistance from others for disabled people to work.

Non-Governmental Organizations in the Countryside

In 2012, all individual disability associations in Arkhangai aimag agreed to unite under the umbrella organization, Federation of Associations of People with Disabilities, to deal with the provincial government effectively and to unify their efforts to reach out to the society. The president of the federation would be elected for a three-year term. This unification made non-governmental organizations stronger than before, especially in dealing with the Governor and Citizens’ Representatives’ Khural, a local council. As Sambuudanzan explains, now the federation is working to develop a five-year strategy and action plan.

This idea of a federation was initially supported by the Finnish Lutheran Overseas Mission (FLOM) – a non-governmental humanitarian organization. To give information about the background here, the FLOM has been operating in Mongolia since early 1990s and supports the local, grass-root, humanitarian non-governmental organizations with the Finnish government funds. Now the Federation will work with ‘Tegsh Tusgal’, a local non-governmental organization that was founded in May 2019. Interestingly, Sambuudanzan stresses that his federation and member associations are now in charge of the agenda-setting for the next four years. The Tegsh Tusgal would provide only technical and financial assistance for the federation to carry out their plans. 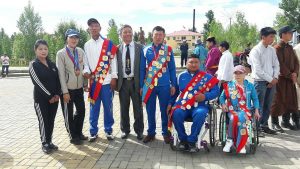 Although opportunities are limited, Sambuudanzan sounded positive about the changing attitudes of the provincial administration. Instead of organizing ad-hoc demonstrations or protests, our guest emphasized that he is being part of the policy-making process starting from a bag (the lowest administrative unit in a soum) to soum and to aimag authority. In that way, the policies toward people with disabilities have a long-term effect. 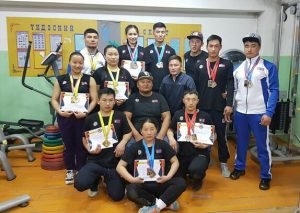 Photo: Sambuudanzan with his young athlete students (with the permission of Sambuudanzan)

After a tragic accident in 2002, he went through physiotherapy to be able to walk with a cane. As he walked through the aimag center, he felt people looking at him with pity and care. He did not seize to work hard – making huushuur (traditional food), driving trucks, and even carrying out handicraft project. One day, he heard about the National Paralympic Championship in Ulaanbaatar and convinced three other colleagues to participate in that championship. At that competition, he felt that he could compete in shot-put and discus throw. After setting up a team and preparing throughout 2009, a team of 12 athletes from Arkhangai province won the national Para-Athletic Championship of the following year. Since then, he participated in many competitions, including the Asian Para Games in Guangzhou. And he even won three medals in shot-put, discus throw, and javelin when competing in Japan; thus, he was inspired to train more intensively. Then, he began training young athletes for the national competitions of powerlifting and also weightlifting. Now during his free time, he coaches and provides opportunities for those who want to get into shape and bodybuilding at his fitness club. He proudly said that people now do not see him as a disabled person, but rather seek sporting advice from him, or see him as a role model for young athletes.

Sharing similar insights about the severe impacts of Covid-19 on people with disabilities, Sambuudanzan described the difficulties for those who need regular medical check-ups and treatment. Two outstanding issues were also the loss or significant reduction of the household income and the increased domestic violence. 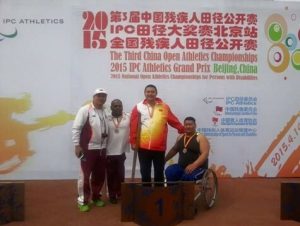 Photo: Sambuudanzan winning a medal from 2015 National Open Athletics Championships for Persons with Disabilities (with the permission of Sambuudanzan)

Listening to his candid and insightful conversation, we felt his courage, perseverance, and passion. He did recall the moment when people disparaged him pointing out that he had only fourth grade education as he was elected to become the president of the federation. But he did not give up. He continued his education and even received an MA in sports coaching. Despite many difficult periods, he stayed on course and followed the example of his dad and dedicated himself to his goal. He proudly said – that he has never been ashamed of who he is and lives happily today. His motto for people with disability: create your own fate and life because no one else will do it for you. At the end, our guest shared his two dreams: (1) to prepare leaders who work at the policy level for the federation in the next four years and (2) to see champions arising from his young athletes.

Jargalsaikhan Mendee is a Deputy Director of the Institute for Defense Studies of Mongolia. He holds a PhD in Political Science from the University of British Columbia, and MAs in International Relations from the US Naval Postgraduate School and in Asia-Pacific Policy Studies from the Institute of Asian Research of the University of British Columbia.
View all posts by mendee →
This entry was posted in Civil Society, Countryside, Health, Mendee Jargalsaikhan, Olympics, People with Disabilities, Podcast, Sports and tagged MENDEE Jargalsaikhan. Bookmark the permalink.