This is the sixth national election campaign that I’m watching on the ground in Mongolia.

I have a head full of visual memories, conversations with campaign workers, talks by candidates, and discussions with voters, that get shifted around and added to with each election.

Here are some descriptions of how the current campaign is unfolding.

In different elections, I’ve been to roughly three different styles of events that candidates are involved in:

Obviously, candidates in the presidential election are quite constrained by their schedule. 21 provinces + Ulaanbaatar, all that in 18 days of campaigning… That means that there are very few stops candidates can make and they have to strive to interact with a large number of voters at these stops to maximize impact. That means that the public rally is the dominant in-person form of campaigning in this election.

You can almost feel the exhaustion and triumph at having made it to 21 aimags by former MP Oyungerel Ts travelling with Kh Battulga.

Candidates typically travel by motorcade, despite the great distances across the country. Assuming that a candidate wants to spend some significant time in Ulaanbaatar because of the concentration of votes here, including the chance to “catch” some voters before they move to the country for the summer where they may be registered, that leaves roughly 1.5 aimags to be visited per day.

Candidates obviously have the opportunity to stop at soums that are located on the big cross-country roads to appear in some smaller communities in addition to the aimag centres.

They may also want to visit their family homes, in part to galvanize local support which is always important.

As a researcher it is difficult to “catch” the candidates at events.

By chance, on an Arkhangai trip, I was able to watch a campaign rally by the MPRP with S Ganbaatar and N Enkhbayar speaking. We had missed Enkhbold’s appearance in Tsetserleg the day before, and would miss Battulga on the next day due to our travel schedule. 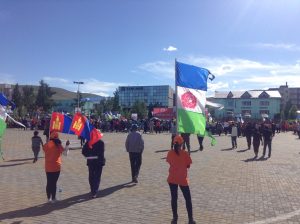 The rally was held on the main square of Tsetserleg, in front of the aimag administration where campaign workers had been setting up the stage since some time in the morning.

It looked to us like the event was delayed in part by a desire to have a larger crowd, but other logistic schedules might have been at play as well. About 1h:15 Ganbaatar actually arrived. 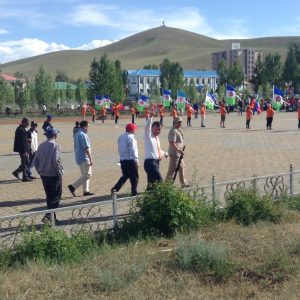 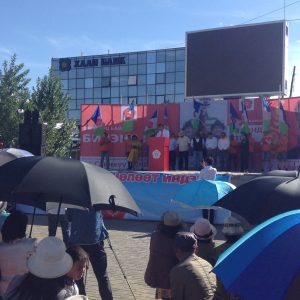 After lengthy introductions and endorsements by some local celebrities, as well as an aged herder, and a young voter, Ganbaatar gave a fairly short speech. Like his campaign platform, it was a fairly high-level speech, i.e. about Mongolia, values, and how he is the option that is a true alternative to MANAS. He got some polite applause, but it was not a crowd that seemed like enthuses protest voters that were thrilled that their candidate had appeared to them. 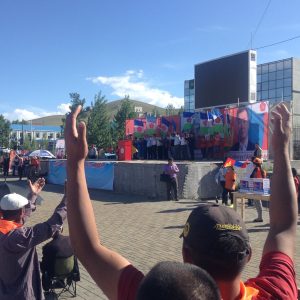 Nevertheless, the crowd offered him a big cheer.

What followed felt like it was the main event, namely the arrival and speech by N Enkhbayar, former president, convicted money launderer and thus non-candidate, and famous son of Arkhangai. While also not a rousing orator, his somewhat soft voice seems to fit his role as perpetual victim of MANAS conspiracies, elder statesman, and focus point of the MPRP fairly well. He also spoke very briefly to loud cheers. 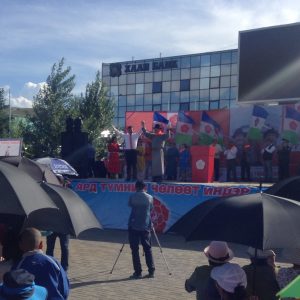 His speech was interrupted by a technical challenge when his microphone stopped worked. He used that opportunity to present Ganbaatar to the crowd in a visual endorsement that also matched the “trust us both” slogan of their campaign.

That scene also appears on their campaign bus.

My guess is that somewhere over 1,000 people attended. Tsetserleg has a population of just over 20,000. Most of the crowd seemed to be partisan supporters, many of them wearing the traffic-cone-orange scarves, t-shirts, and hats that the MPRP uses.

As with many MPRP events, there was a large crowd of older Mongolians, many of them adorned in deels that were decorated with various medals. They were accommodated with benches and umbrellas given the heat of the day and seemed to listen raptly. While the rally might have been timed to coincide with the close of business in nearby administrative and commercial buildings, it didn’t seem like the crowd grew by very much over the course of the rally.

To me, the most notable aspect of the rally was that Enkhbayar was the star of the show, not Ganbaatar. That may have been in part due to his popularity as a local son who became president, but it may also reflect the structure of the MPRP and the choice of Ganbaatar as a candidate who had not been affiliated with the party before.

Julian Dierkes is a sociologist by training (PhD Princeton Univ) and a Mongolist by choice and passion since around 2005. He teaches in the Master of Public Policy and Global Affairs at the University of British Columbia in Vancouver, Canada. He tweets @jdierkes
View all posts by Julian Dierkes →
This entry was posted in Countryside, Elections, Mongolian People's Revolutionary Party, Presidential 2017 and tagged Julian Dierkes. Bookmark the permalink.