After earlier reports on Ganbaatar events and today’s impressions from a final Enkbold event, I just saw the Battulga rally on Sukhbaatar Square a little while ago.

A couple of days ago, I had written an article about the nationalism we observed in the campaign with Mendee J.

That was certainly confirmed by the DP event.

Obviously, an event on Sukhbaatar Square right in front of government house is not only grant, but carries a lot of symbolism with it. 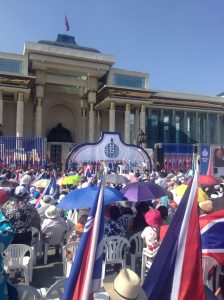 Add to that the DP decor with lots of blue, and the large banner above the stage and the whole event already begins to look very patriotic.

The introduction for the event was less rousing than the MPP’s with some drums, but pretty much launching right away into a series of speeches.

These speeches seemed to last for quite some time. Given the hot sun, I was certainly getting a bit anxious for the main event, i.e. the candidate’s appearance.

Among the observations that drove Mendee and me to write about nationalism was the sudden appearance of deels everywhere. After there had only been a few at the MPP event, the DP stage was filled with deel-wearing DP grandees. 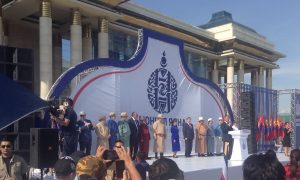 Not only were they striking in colour and complete with fedoras, but a number of the prominent individuals there I had never seen in a deel before.

On our left on this photo you can see frm Foreign Minister Lu Bold (wearing a sky-blue deel), for example, and next to him frm. Chairman of the UIX Z Enkhbold in a tan deel. I had never seen either of them in a deel at a public event before.

And while we’re looking at that photo, note that the people on stage suggest that the DP has rallied somewhat behind Battulga as a candidate. I hadn’t really expected to see people like frm Prime Minister Amarjargal or Bold or Enkhbold to appear here, but they did and they very much looked like they are supporting Battulga.

Here’s another example of such endorsement, in this case on Twitter by Z Enkhbold

Given the above discussion, I was surprised to see that Battulga was not wearing the very handsome black-with-silver dots deel that he had been appearing in for much of the campaign, but instead in a smart suit.

He was welcomed with a loud cheer that seemed much more enthusiastic and also less choreographed than anything I saw at other candidates’ events.

He spoke for about 15 minutes in his typical husky voice. As a speaker, he was quite effective in projecting a personality and a connection with his audience.

He was regularly interrupted by applause and cheers by a crowd that was varied in age, though the flag-bearing campaign workers were all young, most likely university students earning a bit of extra money.

After concluding his speech (again to great cheers), he shook the hand of everyone gathered on stage and listened to a number of additional speakers.

Overall, there was a very different energy at this event than at other events I had seen. I would guess that there were roughly 2,500 people at the event, despite the strong sun, and they seemed like they were supporting their candidate enthusiastically. 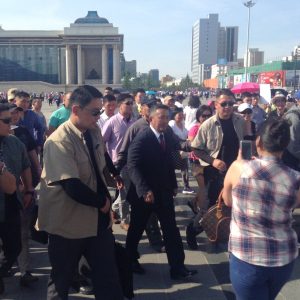 Kh Battulga making his way through crowd after campaign event.

Julian Dierkes is a sociologist by training (PhD Princeton Univ) and a Mongolist by choice and passion since around 2005. He teaches in the Master of Public Policy and Global Affairs at the University of British Columbia in Vancouver, Canada. He toots @jdierkes@sciences.social and tweets @jdierkes
View all posts by Julian Dierkes →
This entry was posted in Democratic Party, Presidential 2017 and tagged Julian Dierkes. Bookmark the permalink.