MPP Campaign Feeling – Or Not

Thanks to an invitation organized by some long-time friends, I was able to attend M Enkhbold’s speech to party faithful that seems to have been one of the last events of the campaign for the MPP.

Always very interesting to observe crowd reactions, especially when the content of the speeches has remained relatively the same over the campaign.

I attended this event expecting it to be a celebration of the party leadership, an enthusiastic send-off to tonight’s debate and a rousing speech to the party faithful to rally them to the final push in the campaign.

As such, I expected over-the-top applause, pomp-and-circumstance, etc.

That assumption would be confirmed by an after-the-event tweet from the MPP.

The opening of the event conformed to my expectations entirely. A video showing the travels of the campaign through all 21 aimags was shown. It was served with somewhat military-style music and many images of enthusiastic crowds from different parts of the country. I thought it was notable that the crowds seemed to be dominated by older voters.

Not surprisingly, all of the MPP leadership was at the invitation-only event at the MPP headquarters.

The first speaker was PM J Erdenebat, then former President N Bagabandi, then G Undarmaa. All three surely meant to warm up and fire up the crowd, or so I assumed. However, it is hard to think of the Prime Minister or the former President getting any crowd particularly excited. They both read from their scripts and did not acknowledge the crowd even during the somewhat sparse applause. 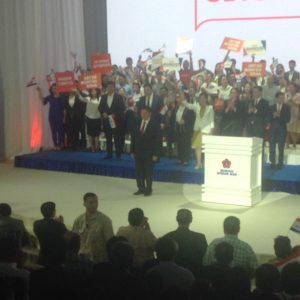 The applause was not exactly deafening.

He spoke for about 15min. He read his speech and when applause got a little bit more enthusiastic (in part spurred on by party staff circulating and encouraging the party faithful to wave flags, etc.), he seemed somewhat surprised. Until the very end when the whole stage was filled with grandees and supporters, he did not crack a smile.

He is a large man, but stands back from the podium in an awkward way.

At times the audience was not entirely sure whether applause was called for and the pauses in the speech did not necessarily offer clues as to the timing of applause.

He used the policy ger as a metaphor, but, for example, did not seem to mention mining once as a topic. He ended his speech with his campaign slogan. 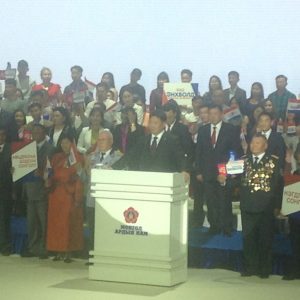 Among the next speakers was Khurelsukh and in terms of the reception for his speech seemed to be by far the most popular. He received at least as much applause as Enkbold did. He leans on the lectern as he speaks, engages the audience, and even cracked a joke (I missed it, but he was the only speaker that elicited laughter).

He spoke about populism, rejecting it for Mongolia and mentioned Chinggis Khaan in the next sentence.

The impression of a “crown prince” was reinforced by the big smile that former PM Su Batbold offered during Khurelshukh’s speech.

After these speeches, there was a grand stage photo op, some cheering, but nothing along the lines of what I expected. The cheers subsided as the music ended and I stepped back from my aisle seat to give the older party activists in my row a chance to get closer to their leadership as they exited the hall. 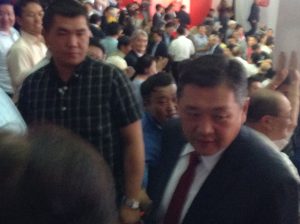 In the end, it is very hard for me to tell whether I had simply expected more exuberance than is typical of these events, or whether this event was somewhat symptomatic of the MPP campaign in general, with somewhat limited enthusiasm for the candidate.

Julian Dierkes is a sociologist by training (PhD Princeton Univ) and a Mongolist by choice and passion since around 2005. He teaches in the Master of Public Policy and Global Affairs at the University of British Columbia in Vancouver, Canada. He toots @jdierkes@sciences.social and tweets @jdierkes
View all posts by Julian Dierkes →
This entry was posted in Mongolian People's Party, Presidential 2017 and tagged Julian Dierkes. Bookmark the permalink.