Although there were some strict measures by the government to combat the deadly virus in Mongolia, it had been so nice to come back to my home country after a few years of being away. The capital city has changed a lot with new, tall and fancy buildings and business facilities. Surprisingly, there were not many traffic jams due to kindergarten and school quarantine. The most important thing I noticed was that the air quality has improved significantly, and people appreciate the government’s efforts towards air pollution.

In terms of the quarantine, it was clear that people were following the government and health officials’ instructions and guidelines very well. They did not seem annoyed or scared, instead, they were encouraging each other to wear facial masks, wash hands and not to spit. I had a sense of pride in how our people and government are working together to overcome this challenging period.

Mongolia has a little less than 5,000 kilometers of border with China. Therefore, Mongolia is considered one of the highest risk countries that Coronavirus outbreak could cause significant problems. However, the government of Mongolia has been taking the risk of an epidemic very seriously from the start of the outbreak in China and has been implementing strict measures including borders closure with China, no travelers from China and checking the body-temperature of all travelers. In addition, the State Emergency Commission decided on the immediate closure of all kindergarten, schools, colleges and universities, and called off all public gatherings, conferences, entertainment events country-wide from January 27th to April 30.

Some media reports indicate that the situation became worse during the Chinese New Year, one of China’s most important holidays when millions and millions of people visit their families and relatives.  If Chinese authorities had acted three weeks earlier than they did, the number of novel coronavirus cases could have been reduced by 95 %. As a lesson, the government of Mongolia restricted its citizens in celebrating the Lunar New Year which is one of the biggest holidays in Mongolia. Fear and travel restrictions made citizens unable to travel in and out of the major cities and provinces. According to local media, most of the people appreciated the decision no matter how important the Lunar New Year is. Health officials also claim that the regular cold and flu rate was down 84% compared to last year due to the school and kindergarten closure.

The World Health Organization (WHO) commended the government’s precautions, efforts and measures to prevent its citizens. Based on my observation, between mid Feb until mid March in Mongolia, people were very responsible, avoiding shaking hands with each other, face-to-face interactions and wearing facial masks to protect themselves. Also, some companies allowed their employees to work remotely from home. All businesses and public service facilities require customers to wear masks, and hand-sanitizer was available everywhere in these facilities. Disinfection and sanitization works have been done sufficiently in public places and streets. In other countries, masks are not recommended unless the person has already an infection. Wearing a mask increases the chances of the person to touch his or her face. It increases possibility of catching the virus. However, in Mongolia, masks are highly recommended by health officials to date. The test results of all first contacts of the French citizen who carried the virus into Mongolia were negative. Even though he disregarded the two-week of self-isolation warning by Mongolian officials, he wore the facial mask all the time in UB, on the train and on the mine site. I believe the facial mask stopped the spread of the virus.

2020 is a parliamentary election year, despite COVID-19 and the quarantine, the election will proceed. All parties and individuals are working actively on their platforms and preparing for the election. Given the challenges due to the coronavirus, president Kh. Battulga recently proposed to postpone this year’s election.

English version of Pres Battulga’s proposals, incl to postpone election (to save costs of all goals!) & to “centralize public administration” (v vague & somewhat ominous despite his claim that “this does not imply an endorsement for dictatorship”).#democracy #Mongoia #MGLpoli https://t.co/mvn9nZprRs

He claims that the election’s budget should be used to overcome potential economic crisis and the coronavirus escalation. He is being opposed by some lawyers arguing that his hidden objective is to gain more political power.

However, few MPs agreed that it might be better to postpone the election. In addition to the president’s proposal, some politicians seem they are taking advantage of coronavirus situation to gain public attention and support. For example, S Erdene, the democratic party leader said, “stop importing the coronavirus from abroad. The health of 3 million people is more important than 5 or 10 people who want to return to Mongolia. Instead of bringing back those who might import coronavirus, the government should focus on the health of 3 million citizens”. This message was addressed to his rival party leader, current prime minister (PM) U Khurelsukh. Because the PM is repeatedly expressing his position to bring back all Mongolians who are abroad and wish to come back. Hopefully, the announcement by Erdene was his personal view, not representing the whole democratic party. No matter if it has a political purpose or not, I am personally supporting the activities around bringing back Mongolians who wish to come to their home during the escalation of the novel coronavirus as I witnessed at the Istanbul airport that how hard it would be for travelers who are stuck in counties/airports where the majority of flights have been canceled and unknowing where to go. 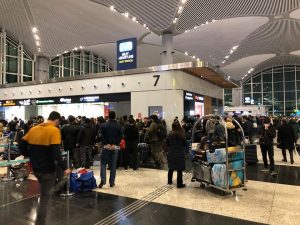 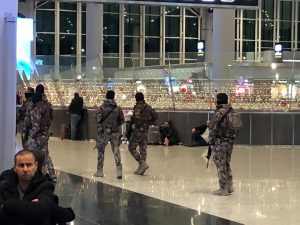 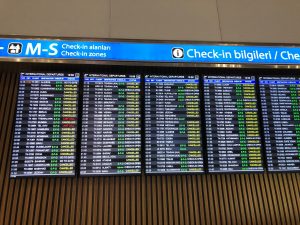 (Istanbul Airport on March 19, 2020 fights are canceled and many stranded travelers and fully armed military and police patrolling)

The Power of Mongolian Grass-feed Meat, Vodka and Polluted Air

When the officials announced the test results of the first contacts of the French expat were all negative, people started speculating that Mongolians will not catch the virus. They say, “We have a good immune system because we consume organic meat that has about 800 types of medicinal herbs and good quality vodka ”. Some friends (who believe in science) also were making jokes that the novel virus is nothing compared to the polluted air in UB that we have been breathing for the last 20 years. It made Mongolians able to protect themselves from any kind of respiratory disease including the novel virus.

Ministry of Health, D Sarangerel made an announcement responding to criticisms that the government was spending a lot of money when Mongolians eat organic meat and drink good quality vodka thus would not catch the virus.

However, these kind of discussions ended when the next cases which were identified from  10 Mongolians who were repatriated by government-chartered flights from Istanbul, Korea and Germany. Good news is that these infected individuals are all isolated immediately and being treated very well in the medical facilities. Officials constantly announce that the spread of the coronavirus in Mongolia is under control, infected individuals are in a stable condition, and there is no one additionally infected. As of 26th of March 2020, there are 11 proven cases (10 Mongolians and 1 French) and 2197 individuals are isolated in different locations in Mongolia in addition to two Mongolians identified with coronavirus in Korea.

Professional background: Zorigtkhuu worked for the biggest coal mining company (Energy-Resources) in Mongolia and an “International Medical Center (Intermed Hospital)” project that was jointly commissioned by MCS group in Mongolia

Julian Dierkes is a sociologist by training (PhD Princeton Univ) and a Mongolist by choice and passion since around 2005. He teaches in the Master of Public Policy and Global Affairs at the University of British Columbia in Vancouver, Canada. He tweets @jdierkes
View all posts by Julian Dierkes →
This entry was posted in Elections, Health, Law, Media and Press, Politics, Social Issues, Zorigtkhuu Bat-Erdene. Bookmark the permalink.