Guest Post: #NONAADAM vs #YESNAADAM – Conflict Between Urban and Rural Values in Mongolia

During the first week of July 2021, Mongolia has seen two opposing protest groups who gathered at Sukhbaatar Square in the capital city, Ulaanbaatar. On the surface, it appeared that the protestors had grievances related to celebrating the Naadam festival this year. Naadam is the most famous festival and one of the biggest national holidays of Mongolia. Both protests were comparably peaceful. However, there are broader societal implications beyond the simple topic about the celebration of Naadam. This short article will illustrate the contesting nature of the more fundamental issues in Mongolian society illustrated by these two protests.

From early June, concerns had been rising about the restrictions and rules introduced by the Mongolian Government on public gatherings during the COVID-19 pandemic lockdown. The government had directed that, on one hand, people cannot open their businesses and all schools must be kept closed for the bulk of the last two years. However, on the other hand, at the beginning of June 2021 there were a huge number of public gatherings throughout the country for the duration of presidential election campaign, contradicting the government’s rule of business shutdowns and the closing of schools. Many of those gatherings seem to have had fatal consequences. Infection rates of COVID-19 and death tolls increased exponentially just after the election, even though a comparatively high percentage of the population had received vaccinations. The government’s use of donated vaccines from China was also criticised.

The government’s decision to permit the Naadam festival a few weeks after the election, in mid-July, during a period marked by lockdowns and restrictions was justified on the grounds of historical and cultural significance for citizens including the younger generation. Naadam in 2021 marked the 100th anniversary of the People’s Revolution. The #NoNaadam protesters disputed the decision and asked for equal and just decisions to be made for all. Protesters said it would be unfair to celebrate the festival whilst most of the country still suffers from COVID-19, and businesses are struggling to survive the pandemic-born restrictions. These events were the brewing pot for anger against the government’s decision for the last two months in Mongolia. 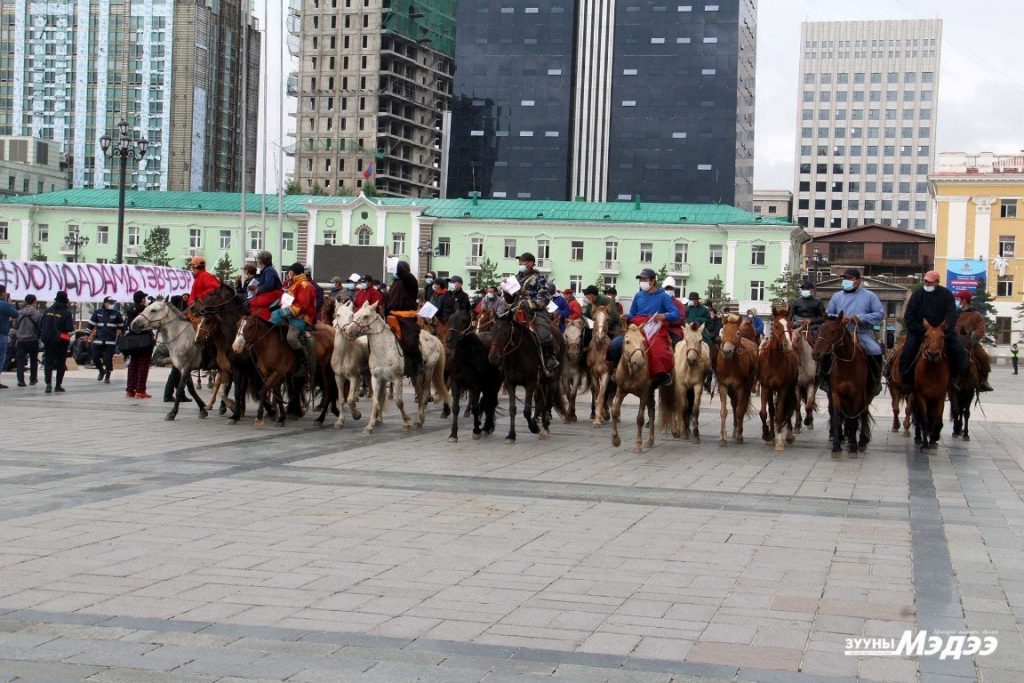 Early in the morning on the 1st of July, the first group of protesters gathered on Sukhbaatar Square and collected signatures to petition against holding the Naadam festival. They also used the #NoNaadam hashtag on social platforms and encouraged the public to support the petition. Their main argument was that it would be inappropriate to celebrate the festival while thousands of Mongolians are suffering from the COVID-19 infection, many even dying from it. Instead, they suggested that all the funding received and all the effort going towards the festival should be directed at the fight against the pandemic and support the doctors and medical professionals.

Meanwhile, opposing #YesNaadam protesters claimed that the Naadam festival is a “vaccine for culture” (soyliin vaktsin) and must not be overlooked and passed over. Moreover, the #YesNaadam protesters argued that the government had a responsibility to alleviate public suffering and hardship from COVID-19, by cheering up the public’s spirit through the Naadam festivities. Many within this group were racehorse trainers, and they rode their horses to the central square of Ulaanbaatar. The sight of dozens of equestrians on horseback in the busy city streets caught the curious eyes of news outlets and circulated on social media for days. Besides, horses symbolise the Mongolians’ traditional way of living and their relationship with nature as nomads, hence, utilized hereto re-create a sense of who are the ‘true’ Mongolians.

Interestingly, some organisers of the Yes Naadam protest were prominent “uyachid” (racehorse trainers) who are in most cases, well-known and wealthy businessmen with strong political influence. In fact, horseracing, training, and racehorse trading is multibillion tugrug industry. Some politicians are heavily involved in horseracing and are willing to spend lavishly on employing the best horse trainers for their racehorses. The former head of the Mongolian People’s Party (MPP) and a former adviser to the Prime Minister were both top executives of the Federation of Mongolian Horse Racing Sport and Trainers (Mongoliin Morin Sport Uyachdiin Kholboo). To put this in perspective, wealthy businessmen and politicians had pushed to celebrate Naadam festival and possibly financed the Yes Naadam protest using the support of local nomads and herders.

Moreover, a number of performing artists and famous singers also supported the move to celebrate Naadam festival, openly expressing their views on television while they were rehearsing the opening ceremony of Naadam. Although the official festival was cancelled, an opening ceremony was organised and aired on national television. However, public has responded against their support and heavily criticised their interviews and organised informal social media campaign against them which is very modern and “urban way” to respond.

At the end of this conundrum, the government eventually announced the cancellation of the Naadam festival. Even though these protests can be read as disagreements on the celebration of Naadam, they signify social segregation between the elites and non-elites, urban and rural; modern and traditional lifestyles. The clash of these two parties was perhaps the first of its kind in the public eye, but is not new. Economic, educational, and ideological differences between the urban and rural areas of Mongolia are widening. The country is confronting a worrying decline in social justice through rising inequality.

Mongolia is regarded as one of the last standing nomadic cultures, but those nomads and ‘herder’ communities in the rural areas of Mongolia are often regarded as outcasts and ‘orcs’ as Mongolians use this term from J.R.R Tolkien’s books and the Lord of the Rings trilogy; fictional humanoid monsters with no form of civilisation. From the rural side, nomadic people often criticise their urban counterparts for not maintaining traditional culture and blaming them for forgetting the Mongolian way of living. These contradictions cause social justice and inequality issues in broader society in terms of cultural values.

According to Nancy Fraser’s framework, there are three dimensions of social justice: economic, cultural, and political. As Fraser (1995) defined, social justice and inequality are multifaceted and difficult to frame in a single term. This urban and rural disparity is perhaps in the domain of cultural injustices where it happens when a dominating social value or its hierarchical patterns create status inequality or ‘misrecognition’. This misrecognition produces misunderstanding between social groups and widen the disparity. However, this disparity and tensions between social groups do not only embrace cultural injustice, but also embrace ideological conflicts concerning economic rights.

For instances, rural communities experience health care and education that is poorer in quality compared to urban dwellers. Rural people also have poorer employment and career prospects. Yet, government policies have largely focused on improving services for the capital city (Ulaanbaatar). The needs and concerns of rural communities have been neglected. As a result, there has been continuous migration from the countryside to large cities, as people seek more opportunities for a better quality of life. In the absence of appropriate government policies and plans, rural migrants have ended up in suburban ger (yurt) districts without improvement in their quality of life. On paper, the poverty rate in rural area recently fell by 4%, but remained the same in urban area. This can be explained by the rural to urban migration. Rural migrants who live on the outskirts of Ulaanbaatar experience many economic and educational inequalities. Even after urban settlement they are still considered as rural people. This is an area requiring more empirical research and policy activism to address urban and rural contradictions.

Exposed to socialism and capitalism, social-democracy and neoliberalism, Mongolians are struggling to find their identity as a nation. The question is how might Mongolians effectively mediate the conflict between the urban and rural, local and global, and the modern and traditional ways of living in our nation-state (Bumochir, 2020). To prevent greater social divisions, as Fraser suggested, government needs to implement some ‘recognition approach’ to increase social cohesion and enhance the understanding between urban and rural values. Likewise, government policies should employ some redistribution approaches that highlight the importance of regional and rural Mongolians.

Usukhbold Chimedregzen currently lives in Brisbane, Australia. He graduated from the NUM with BA in political science, and University of Queensland with MA in Education leadership and policy. He is passionate about Mongolian education policy and social justice issues in education. He is aiming to do more research in this field. Email: usukhbold@gmail.com

Julian Dierkes is a sociologist by training (PhD Princeton Univ) and a Mongolist by choice and passion since around 2005. He teaches in the Master of Public Policy and Global Affairs at the University of British Columbia in Vancouver, Canada. He tweets @jdierkes
View all posts by Julian Dierkes →
This entry was posted in Countryside, Health, Naadam, Protest, Public Policy, Social Issues, Social Movements, Ulaanbaatar, Usukhbold Chimedregzen and tagged Elections, Mongolian People's Party. Bookmark the permalink.