Untold Blogpost 15: Dreaming About Safe Roads to My Work

Bat-Erdene or Babu, as his friends call him, is a masseur, marathon runner, musician, and khoomii singer. After losing his eyesight at the age of 16, Bat-Erdene lost his hope and hid away from society for 4-5 years. During these years, he just listened to the radio and television, but gave his parents such a hard time, as he mentions with regret throughout the podcast. However, he made himself study a totally new profession and became a role-model runner for the Achilles International Mongolia. Here are some key points from this very open-minded interview.

When he was a little boy, his grandpa praised his calming hands and, of course, he didn’t like to give massages at that time. Then, as he was staying at home due to blindness, he decided to go to the school of the Mongolian National Association of the Blind. First, he graduated from the computer course, but soon realized his computer skills were not competent enough and had little chance of employment. Recalling his grandparents’ praise, he completed a six-month massage therapist training. One of the key reasons is that the association provides an immediate employment opportunity. So, he has been working as a masseur since 2014. This wasn’t as simple as I wrote. The most difficult thing for him to overcome is his fear of going outside, finding his ways to the bus stop, and walking alone relying on his cane. We all know that the road is terrible, even for a healthy person, in Mongolia. If one sets a goal and believes in themself, the person can overcome most difficult challenges.

In 2019, he found a new hobby. A well-known para-athlete and coach Lhagvajav lured him into running – not a simple one, but the marathon. Bat-Erdene challenged himself through rigorous training with the coach and won against himself running the New York Marathon. “The feeling after finishing the 42.195 km is impossible to describe by words,” our guest exclaimed. For him, all his previous hardship was not comparable to marathon running. You would experience all types of feelings (up and down) and test your mind and patience. When you’re running, you think a lot. Unlike the other marathon runners, a disabled runner, especially one who has lost their eyesight, runs with a guide runner. For example, Bat-Erdene trained with his guide runner for over three years – as, Bat-Erdene explains, both need to run as if they were one person. The guide runner has a number of responsibilities, including to guide, grab water, provide mental support, and monitor health. His running experience was facilitated by the Mongolian Chapter of the Achilles International.  The Mongolian Chapter now has about 20 athletes and many support staff, mostly volunteers. 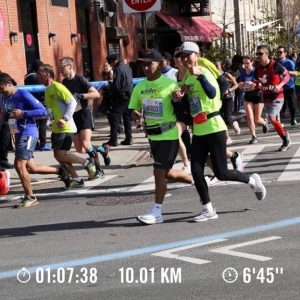 Photo: Bat-Erdene or Babu along with his guide running the marathon (with the permission of Bat-Erdene)

Bat-Erdene and his guide completed a successful marathon last year, but it was conducted online. All runners registered their start and end time through the special app. Now they are preparing to participate in the BMW Berlin-Marathon on September 26. Because of the pandemic-related restriction, they started their training in April and are now in the last phase of their training. Surprisingly, they launched their fundraising campaign on the platform Clubhouse. It was interesting, as he explained his preference for using Clubhouse – according to him, it is becoming more orderly and, people seem to have a nice attitude. Using his skills of playing the morin khuur – a horse-headed fiddle and khoomii singing, Bat-Erdene is apparently attracting more audience during this fund-raising. He learned morin khuur at the training centre of the association and is now planning to set up a morin khuur quartet. As the conversation continues, it is becoming more and more appealing/ to listen to his khoomii and morin khuur. Hopefully, he will demonstrate his skills in our upcoming vlog. 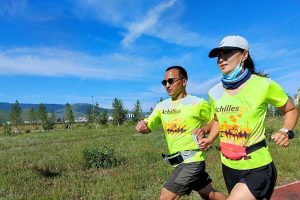 Photo: Bat-Erdene or Babu practicing with his guide (with the permission of Bat-Erdene)

There are many people with disabilities, especially in the countryside, who do not know about the opportunities to obtain new professions, to work, and to socialize. Now the vocational training center for the people with disabilities offers many new professional programs. Some people search for opportunities by themselves, but many need the information and also the encouragement from their closed ones. If you are a relative, friend, or a parent of a person with disabilities, please let them know the opportunities and encourage them to empower themselves. Things have been changing and society has become more open to people with disabilities. In comparison to 2012, when he lost his eyesight, there are some improvements on the sidewalk for people with canes, few more pedestrian crossings have sound systems, and the youth are willing to help when you ask the whereabouts of the bus stop or the direction of the bus. Yet, he didn’t hide some ugly facts: installation of the light pole or cement block on the sidewalk, disappearance of the pedestrian sidewalk, and silence and negligence at the bus stop. However, our guest does not want to talk about negative aspects while intentionally leading our discussion to the bright side of the world.

As our discussion nears the end, Bat-Erdene said that some people do not work with the matter at heart when they are constructing the road – maybe they just think about the money. Indeed, I agree with him and should add, the people who are giving away the contracts for the road construction and those monitoring their work also are engaged in their work without heart and mind in the matter or encompassed better in a word in Mongolian – ‘setgel’. When we asked what he wished for the future, his response was simple – “…a city without traffic jams, but with accessible sidewalks. We don’t need more buildings or fancy cars, we need friendly roads which take us to our work and also faster, easier, accessible public services at the districts and khoroos.”

Jargalsaikhan Mendee is a Deputy Director of the Institute for Defense Studies of Mongolia. He holds a PhD in Political Science from the University of British Columbia, and MAs in International Relations from the US Naval Postgraduate School and in Asia-Pacific Policy Studies from the Institute of Asian Research of the University of British Columbia.
View all posts by mendee →
This entry was posted in Mendee Jargalsaikhan, People with Disabilities, Podcast, Sports and tagged MENDEE Jargalsaikhan. Bookmark the permalink.