Untold Blogpost Episode 8: Everyone Has the Right to Learn

Our guest today is Ms. Munkhzul.D, a principal of the 263rd public kindergarten in Songino Khairkhan district of the capital city, Ulaanbaatar. After graduating from the Mongolian State University of Education in 2011, this kind-hearted lady works passionately with the children. In this podcast, she shared her experience of welcoming a child with cerebral palsy – a group of disorders affecting a child’s ability to move and maintain the balance – into her kindergarten.

Welcoming a Mom and a Child with Disability

As the newly built kindergarten was preparing to open, a mother with a three-year-old boy came by and asked whether it was possible to get her child enrolled in this kindergarten. Munkhzul recalled that moment when she immediately put herself in that mom’s shoes. Since the inclusive educational environment was already legalized, the child’s residency belongs to her kindergarten’s coverage zone, and kindergarten teachers already have been taught at university how to teach children with disabilities, she decided to accept the boy. Moreover, she hired his mom as an assistant teacher because she had all the qualifications for the job. Then, through World Vision, she began to work with Doctor Narantsetseg of the Mongolian National University of Medical Science and specialists of the Development Centre for Children with Disabilities. Furthermore, she set up a support team, which consisted of classroom teacher, an assistant teacher, a kindergarten doctor, a nurse, and his mom. According to the initial assessment, the boy’s linguistic and mobility level was at the level of a two-year-old child although he was actually three years old. Since the child lives with his mom and his brother, and could not enroll in any kindergarten before, he did not have much social interactions – which is a key element to assess a child’s level of disability. Following the assessment, the support team developed a plan and worked together to help the boy. 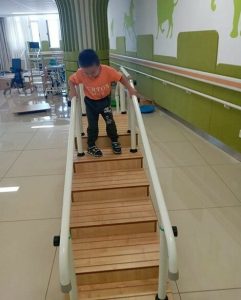 Photo: The boy in the Rehabilitation Center for Children with Disabilities in Mongolia(with the permission of Munkhzul)

The most immediate challenge was posed by the attitudes of other parents and his classmates. Even though the disability is not an infectious disease, parents were asking why their children were studying with a disabled child and, some even wanted to change their children’s class. The principal and teachers tried to explain this to other parents, but some of them were slow to change their attitude. Classmates, as Munkhzul recalls, were first surprised of the boy’s difference, why he could not walk, and talked strangely. So, the teachers decided to show an animated movie about children with disabilities. She said watching animated movie is one of the best methods to explain things for kindergartners. After four months, his classmates’ attitudes began to change. Some wanted to help him brush his teeth, go to washroom, and get a toy. Others played with him. So, the boy began to lose his shyness through these social interactions. There were noticeable improvements in his speech. However, his mom, who works as an assistant teacher, comes early in the morning by piggybacking her child into class and leaves after everyone has left. As Munkhzul explains, she does not want to get her child hurt when someone says something bad. One time, an elderly man called her child spoiled – as his mom carried him because he cannot walk. However, the elder man did not know the boy was suffering from cerebral palsy and his mom did not want to explain. 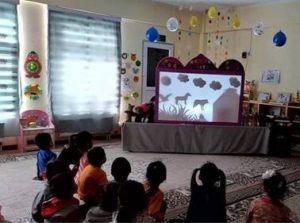 Photo: The children of the kindergarten (with the permission of Munkhzul)

Work with and Listen to Kindergarten Teachers

In the public kindergarten, a teacher and assistant work with about 30-35 children. Despite excessive workload, kindergarten teachers are experienced to observe each child and always seek ways to help children learn. Here, particularly when working with a child with disability, the parental collaboration and feedback is most important. If a child’s disability is diagnosed as early as possible, teachers and parents can work together to help the child develop certain skills and teach how to socialize with other children. There are two types of parents, as Munkhzul explains, one is like the woman who tirelessly seeks all possible ways to work with teachers and specialists, but there are other ones who do not want to accept the fact that their child has some type of disability. And she shared her past experiences as working as a teacher. After she noticed a child could not draw properly, especially when using colours. So, she asked her mom, a well-educated lady, to have her child diagnosed by specialists along with her kindergarten doctor. But on the next day, the husband blamed her for discriminating his child and complained to the principal for mistreating his child. It took almost a year for these parents to have their child diagnosed, who then needed to have some assistive glasses. If they had followed the teacher’s suggestion a year earlier, it would have been much better for the child. Also, there are some other parents who bring their child in the beginning of the school year in September; however, they do not realize the kindergarten needs to prepare to accommodate a child with disability, because every disability is different. This would help the kindergarten staff to develop a specific training and evaluation program, which is tailored for that child. Therefore, parents should visit the kindergarten in the spring and collaborate with the kindergarten for the next school year. 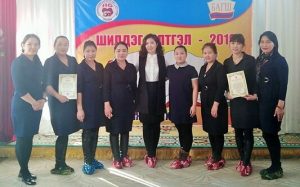 Photo: Munkhzul with her colleagues (with the permission of Munkhzul)

According to Munkhzul’s observations, parents with disabled children experience two types of challenges. The first is to deal with the psychological and mental hardship. In most cases, men are more likely to abandon their children and mothers stay with their children. Or, even if both parents stay together, mostly mothers stay home to take care of their child with disability. Single parents with disabled kids could not work, which further leads them to be isolated from social interactions. Thus, they become more stressed and sensitive. Therefore, these parents are in greater need of counselling, coaching, and even talking with people who understand their problems and help them find ways to overcome the mental hardship. The other is to improve the early diagnosing. For example, a woman, who brought her child to Munkhzul’s kindergarten, spent almost three years trying to get a proper diagnosis. All specialists gave her a different diagnosis; as a result, she did not get social welfare benefits for taking care of her son, nor subsidies for her son’s medical services and assistive device (walking aid for a child with cerebral palsy). If the doctors had diagnosed her child properly as earlier, she would have gotten some financial assistance and her son would have received the right medical treatment and rehabilitation. 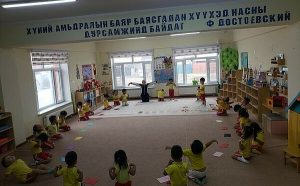 Photo: a teacher and children of the kindergarten during a class (with the permission of Munkhzul)

Impacts of the COVID-19 pandemic have been tremendous on kindergarten children, as explained by our earlier guests, disabled children develop more when they are in social interactions. Despite this difficulty, Munkhzul and her teachers spent more time on professional development. For example, they had a two-day workshop with Ms Kimiko – a Japanese kindergarten teacher working in Mongolia.

Jargalsaikhan Mendee is a Deputy Director of the Institute for Defense Studies of Mongolia. He holds a PhD in Political Science from the University of British Columbia, and MAs in International Relations from the US Naval Postgraduate School and in Asia-Pacific Policy Studies from the Institute of Asian Research of the University of British Columbia.
View all posts by mendee →
This entry was posted in Education, Mendee Jargalsaikhan, People with Disabilities, Podcast, Uncategorized and tagged MENDEE Jargalsaikhan. Bookmark the permalink.