With one party member in Parliament, the KhUN party has the right to register a candidate for the presidential elections on June 9, 2021. They announced on May 12 that D. Enkhbat would be the candidate.

On April 30, #Уухай! Clubhouse ran a conversation on Clubhouse and Facebook Live with Enkhbat, which was also transcribed and posted on Ikon.mn. Julian, Bulgan, and I collectively decided that it was a substantial conversation and merited an English-language summary for our readers.

This post describes and situates some of the questions and concerns brought by participants, as well as Enkhbat’s replies and comments. According to the Ikon transcript, the session lasted for four hours, and it appears that some questions were asked by prominent politicians from KhUN and the DP(s) (and formerly from the DP(s)), including Munkhsoyol and Oyungerel. Overall, the conversation reflected major concerns about Mongolian politics leading up to the Presidential elections articulated recently on the blog, particularly the concentration of power in the hands of a president, a single party, and/or the parliament. 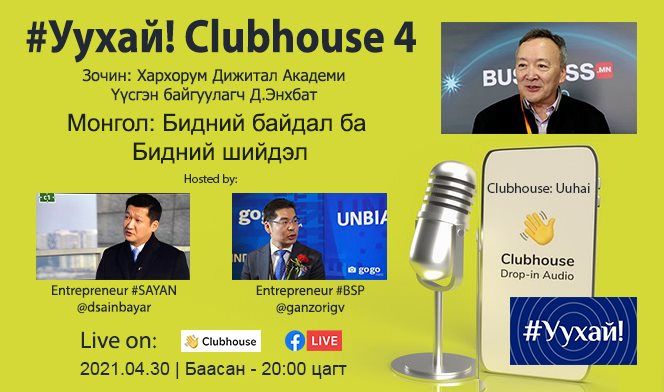 During the session, Enkhbat touched repeatedly on the need for Mongolia to diversify its economy beyond mining, touting internet-based education. This is not surprising, given Enkhbat’s position as former CEO and founder of Datacom, which oversees the country code top-level domain “.mn,” and which operates with a commercial license according to Wikipedia. He was also asked about his part in translating Khan Academy  into Mongolian (which he said is intended to spur Mongolian-specific content creation by Mongolian educators) and his business development project, Karakorum Digital Academy.

Less well known may be Enkhbat’s past as a politician. He was, according to Alan Sanders’ Historical Dictionary of Mongolia (2017) the single MP from the Citizen’s Alliance (which included the Green Party, prior to it and Enkhbat’s union with S. Oyun’s Civil Will Party in 2011) in the 2008-2012 Ikh Khural and according to his LinkedIn profile, a “co-chair” of the Green Party from 2007-2011. One participant was quick to establish Enkhbat’s past with the audience, reminding it of Enkhbat’s “going to the meeting” while “other leaders watched TV at home” during the tumultuous post-election events of July 1, 2008. The interviewers in general did not hesitate to dive into his past, and also asked Enkhbat specific questions about his views on the future shape of Mongolia’s government, detailed below.

Enkhbat spoke about institutions and civic participation without prompting, and also responded to questions asking why he “left politics” by saying he had not left, but participated in organizations such as the [Open Society] Forum.

“business and education issues, especially teacher initiatives and ethnic identity, are not just political issues. We are once again pushing all these issues to the other party and government. I don’t think the party system is wrong. But what is the main problem of the party system? The problem is that we have only a party system. Mongolia has made state political democracy. We have parties, a parliament and free elections. However, they did not establish any real or other social institutions. Professional associations, youth organizations, and various interest groups, especially civil society, are not institutionalized and organized. That’s why we bring thousands of Mongolian issues to the other party and politics. There, the party has become a channel for decision-making without competition, so it is rotten and bankrupt.”

“You can support a political party, make a political career and help yourself without becoming a boss. After that, social integration can be involved in many other things. Not necessarily a political party. You can participate in various non-governmental organizations, cooperative work and movements. That’s why I’m not asking young people to be leaders, but be involved and make decisions about their lives. Get involved in politics. Maybe you’ll like it. It doesn’t matter if you don’t like it or not.

Democracy works when everyone participates. Democracy will not be made by 76 members [of Parliament] and one genius President. Probably because people think that political parties are more developed today, people are active in it. So go into politics for three or four years. Just participate in the election and work as a supporter. Then tell me the answer in four years. If not, then stop. If you are interested, go ahead. In other words, this is the working environment of democracy. Now watching TV and waiting for democracy will not work. Therefore, young people must participate in some way.”

Presidential vs. Parliamentary and/or Party Dominance

Enkhbat was asked repeatedly about his views on the power of the presidency, and the condition of political parties. Notably, he did not argue strongly that either a presidential system or parliamentary system was better or more suitable for Mongolia (though stating why he would favor parliamentarism), but rather that the issue was to make the system in question function. He stated repeatedly that the president should be a “unifying” force involved in Mongolia’s position on the world stage, the Parliament should be strong, and that parties should be professional, but democratic and open. Interestingly, he did not have much to say specifically in support of campaign finance measures that have been touted by other KhUN members, though at least one question provided a clear opening (“What should we do to eliminate the ‘moneyed’ election?”).

“the world is full of bankrupt countries with a presidential system, and the world is full of bankrupt countries with a parliamentary system. The question is not whether we have fully implemented or established it, but rather the form of governance. Parliamentary governance is not bad, but we have underperformed with our party system. Nor have they established civil society or social institutions in general. Any car that is incomplete is bad. There are no three-wheeled buses or trucks. Instead, parliamentary governance is appropriate for Mongolia. If it were possible to start from scratch, I would choose parliamentary government. Mongolia is a small country. There are many risks involved in centralizing power over national independence. We cannot have such a fragile state. Therefore, there must be a proper system and a comprehensive parliament.”

“We need to support our parliamentary system. Maybe if we had chosen a presidential system 30 years ago, we should have improved it. Now that the parliamentary system has been chosen, it needs to be improved. I don’t believe that children who do poorly will learn better when they start a new notebook. I don’t think we need to oscillate back and forth. Because to start all over again, especially for such irresponsible countries as ours, will only deepen the crisis.”

“[Q.] If you become president, will you be able to curb this monopoly power of the president?

“political parties have not changed at all in 30 years. That is why the parties are holding back society. This is followed by problems with the political party system, especially internal party democracy. We must protect the interests of party members by law. Following the electoral system, personnel policy was lost. There is no merit-type human resource system. The main source of the current governance crisis in Mongolia is the political party system. That is why we need to move towards a healthy election and political party system. In addition, the unity of the Mongolian state has been lost. It is re-elected. In other words, we have a four-year lease of power to those who donate money to the state through the rent system. It is disintegrating the state. Therefore, governance issues need to be addressed by making the public personnel system agile and professional.”

“For a political party to remain healthy, the participation of its members must be guaranteed by law. Parties are not private companies. The right to enter, leave and leave a social institution called a party must be open. Therefore, the most important factor in the transformation of a political party is the personnel system. A party member needs to build a pyramid that follows the party’s values ​​and ideology and continues to move forward. In other words, let’s get rid of the word party. This is a labor-power system. The basis of human resources to lead the country.”

“[Q.] If you become President, can you be independent of the party you are nominated by?

Don’t be friends without principles. If you can agree on the principles on both sides, you can work very closely. In other words, if the values ​​and principles are the same, you can work with any party on certain laws and certain issues. So I don’t like to talk about someone being loyal or close to KhUN, MPP or DP. But if the rules, principles, and work of the game are the same, it doesn’t matter which party you belong to. Therefore, on the one hand, the president nominated by the KhUN party must stay away from the political party in accordance with the laws and constitutional principles of Mongolia. On the other hand, if you have the same values ​​as your political party, you have to work as closely together. That’s the principle.”

On Russia and China:

South Korea and Japan (but especially South Korea) were mentioned several times as exemplars of development in tune with national specificities.

“[Q]: What exactly are the spiritual values ​​and unity of Mongolians? How do you see Mongol studies?

I am very surprised at one thing when I go to Japan. At first glance, everything is Japan, [and also] at first glance, a 21st century modern country, technology. So there is a combination. In the same way, Mongolian identity, the ability to differentiate, or the ability to unite us, is to some extent inevitable in our history and culture. We just need to study how to shape it in the 21st century. We have to study Japan and Korea, we can’t guess. This must be constantly debated and tested. Even the Koreans realized that they were wrong only by trying. We need to prepare the ship and the car to go there now. And you have to be steadfast.“