Ms. Altantsetseg.B is the Executive Director of Special Olympics Mongolia. Having spent most of her career as a geologist/geochemist at the Mongolian Academy of Sciences and several other mining companies, Ms. Altantsetseg believes it was fate that brought her to her current position four years ago. She is a proud wife, a mother of two, and a grandmother of three. 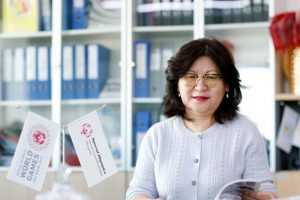 We began our interview by talking about Special Olympics Mongolia and what the organization is all about. According to our guest, it was founded in 2013 by families of children with intellectual disabilities. Today, it has over 2500 registered athletes and unified partners. Through the power of sports, Special Olympics Mongolia aims to help people with an intellectual disability to gain confidence, social competence, and friendship, as well as to raise awareness and to create an inclusive society for all regardless of their disability. The team working towards this important goal consists of five full-time employees and numerous volunteers. On top of the usual sports and health promotion events for athletes and families, they also organize many outreach programs for young people, teachers, doctors, social workers, and government officials.

During the interview, Altantsetseg openly shared that there is very little public knowledge about the Special Olympics compared to the Paralympics. She confessed that even she knew little about the Special Olympics before joining the organization. As she explained to our listeners, unlike the Paralympics, which is for elite athletes with physical disabilities, the Special Olympics is for all children and adults with intellectual disabilities, such as down syndrome, cerebral palsy, and autism. The focus of the Special Olympics lies not on competition but on participation by welcoming athletes of all ability levels without any qualifying standards. There are 42 different summer and winter sports. Mongolian athletes actively participate in around ten sports including table tennis, polo, football, basketball, volleyball, and badminton. During the last summer game in Abu Dhabi 2019, 28 athletes and unified partners (people with no intellectual disability, mostly family members and volunteers, who participate in team sports alongside the athletes) competed in seven sports and came home with an outstanding accomplishment of 19 medals in total (three gold, seven silver, nine bronze). 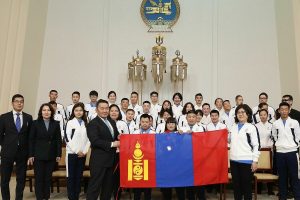 Photo: Ms. Altantsetseg with her team and the former President Battulga (with the permission of Altantsetseg)

Altantsetseg stresses the importance of sponsors, and the invaluable work of volunteers to run the organization. As the Special Olympics Mongolia is an NGO, it doesn’t receive any funding from the government. Most of the financial needs are sponsored by grants from Special Olympics International, international organizations, corporations, and other donors. Altantsetseg highlighted that especially with the increase of corporate social responsibility, it’s becoming less difficult to raise funding from private corporations as compared to 2017 when she first started the job. She is the most excited about how the young people are changing attitudes and their relentless, ever-increasing participation as volunteers. Until they get to know them, people don’t realize that children with an intellectual disability are often the warmest and most loving people. Their innocence and unconditional love are the best reward for the volunteers, who often say that they are the real beneficiaries, as Altantsetseg cheerfully added. She recalls how she herself received countless hugs and cuddles from the athletes during her trip to Abu Dhabi, more than she ever did receive in her entire life. During the interview, she repeatedly showed her optimism and appreciation for the volunteers.

One of the inspiring stories she shared was about a boy called Bilguunee. He has an intellectual disability and lives in the ger district of Ulaanbaatar. He found interest in fitness training, unfortunately, there weren’t any gyms nearby. So, every time he wanted to train, he had no choice but to walk for an hour and a half to the nearest gym. Despite the challenges, he worked hard, and he even successfully competed in national championships. His story inspired the ‘Opportunities for All’ project with support from the European Bank for Reconstruction and Development. The aim is to bring gym facilities to children with an intellectual disability in ger districts – Nalaikh, Bayankhoshuu and Tolgoit. Gym equipment will be given to local schools or sports clubs in exchange for the free admission of people with an intellectual disability from nearby areas. Proper training will be provided to the teachers and staff, as well to facilitate their training. Bilguunee’s story is one of many tangible examples of the hardship and limitations people with an intellectual disability face every single day. 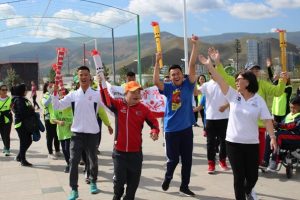 Photo: Ms. Altantsetseg with member of Special Olympics Mongolia (with the permission of Altantsetseg)

We concluded the interview with a discussion of what the future may hold for Special Olympics Mongolia. Altantsetseg told us that the vision for Special Olympics for the next 50 years is to bring people with an intellectual disability to the forefront from their usual back seats. So that ultimately, they could share their story in their own voices and take an active part in the fight for their own freedom and wellbeing. As for her own future, Altantsetseg is hoping to hand over her role to the next generation of young people. Until then, she plans to continue working hard for as long as it takes them to achieve their goal.

Odmaa Sod-Erdene holds a MA in Economics from the University of British Columbia and currently works as a data scientist at Fidelity Investments Canada. Previously, she worked as a research analyst at the Dalla Lana School of Public Health, University of Toronto, where she focused on evaluating the impact of social policies on population health and health inequalities.

Jargalsaikhan Mendee is a Deputy Director of the Institute for Defense Studies of Mongolia. He holds a PhD in Political Science from the University of British Columbia, and MAs in International Relations from the US Naval Postgraduate School and in Asia-Pacific Policy Studies from the Institute of Asian Research of the University of British Columbia.
View all posts by mendee →
This entry was posted in Education, Olympics, People with Disabilities, Podcast, Sports, Younger Mongolians. Bookmark the permalink.