There are about 7000 ~ 9000 drivers – carrying out massive coal transportation from three mines, Ukhaa Khudag (known as Energy Resources LLC), State-Owned Erdenes Tavan Tolgoi, and locally-owned Tavan Tolgoi company.  They came from all across Mongolia to make their living in the harshest and least regulated work environment, as succinctly described by one of our respondents, “they are in Mongolia’s Syria.”

Only a few hundred drivers belong to the Energy Resources LLC and other properly-run transportation companies – that comply the country’s labour, health, and transportation laws, regulations, and standards.  They have annual medical check-ups, all types of insurances, and receive salary and benefits. Another hundred drivers have homes or relatives in three soums – Tsogttsetsii, Khanbogd, and Bayan-Ovoo.  The rest 6000~8000 (the number changes depending on job availability and Chinese demand) literally live and work in their trucks, except a few nights in their ger camps.

The most, nearly 99 percent, don’t own their trucks.  Without proper labour contracts and legal protections, they make their living by driving for someone, who either Chinese or Mongolian, owns trucks and exploits vulnerable, disenfranchised drivers. But they are, along with these secret owners on either side of the border, powerful enough to cause the force majeure for Oyu Tolgoi and all mines at Tavan Tolgoi by blocking or delaying the only export routes for the country’s copper and coal. 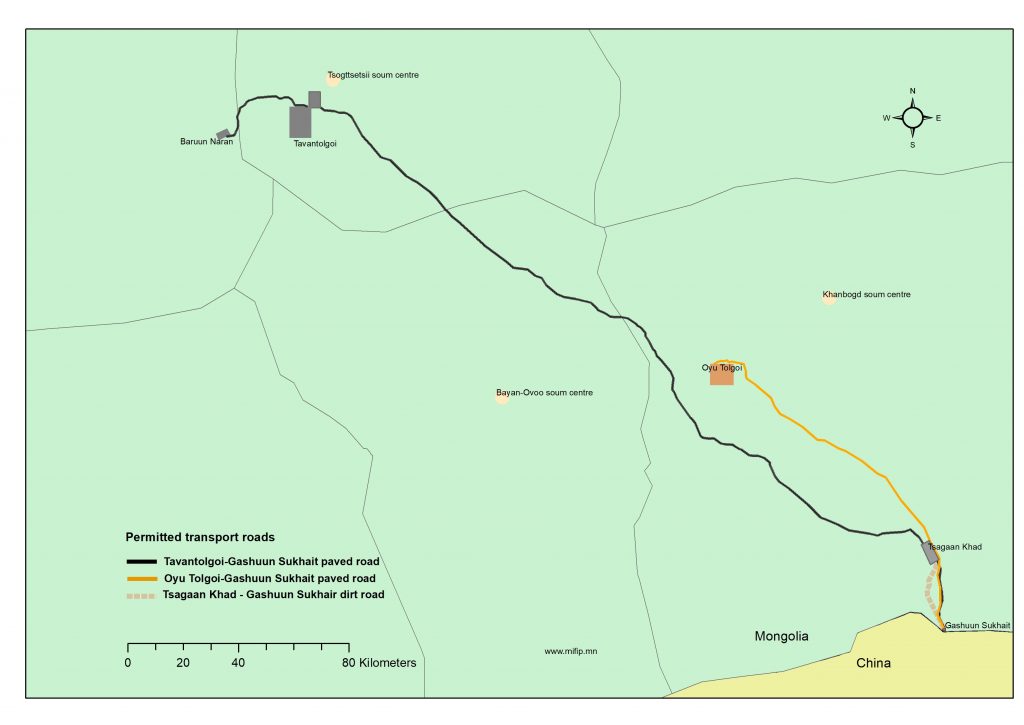 Obviously, driving for 24 hours and seven days in a week.  They drive along the 270 km road between three coal mines at Tavan Tolgoi and Chinese buyers across the Sino-Mongolian border.  Although in the past, drivers used to only transport the coal directly to Chinese side, a new customs control zone, known Tsagaan Khad Customs Control Zone, was established about 20 kms from the border crossing (Gashuun Sukhait/Gants Mod Port) to unload and reload the coal.  For anyone, especially for mining companies and buyers, the extra unloading and reloading doesn’t make sense.  But, the key rationale behind the unnecessary (un)loading zone for local authorities to increase the value of the coal, but for the government officials to ameloriate drivers – who had been complaining about the long lines.  Drivers choose one of three routes:  long & long (270 kms from mines to across Chinese border), long (170 kms from mines to Tsagaan Khad customs zone), and short (20 km from Tsagaan Khad customs zone across Chinese border).  A typical task for the driver is queuing along the dusty road in the scorching Gobi climate.  The length of the wait time depends on how many trucks have been permitted to enter by the Chinese customs (average is 500-600 trucks per day).  A driver will spend 2-4 days for getting the coals from mines, 12-15 days waiting in the line to cross the border, and 3-5 days to return. 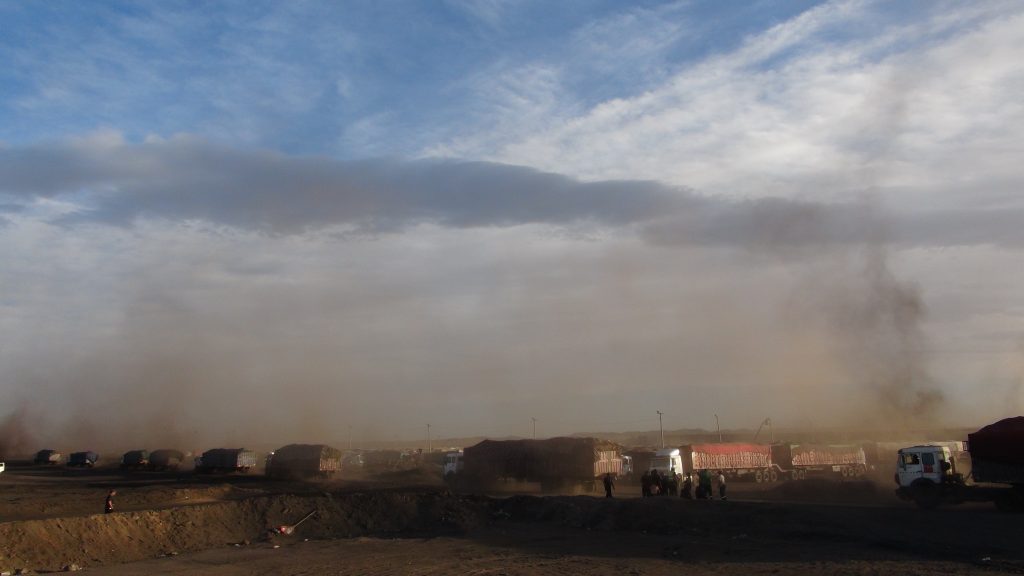 All fine laws – respecting human rights and labour rights – have not been enforced.  Local authorities, especially law enforcement, starting from traffic police, police, inspectors, and to health professionals, are overwhelmed by the number (7000 – 9000 temporary residents, plus another 1000 for providing services (e.g., delivery taxis, mechanics, ger restaurants, prostitutes).  Moreover, public servants dispatched from the government agencies (e.g., customs, borders, professional inspections, road transportation) are understaffed and, again, overwhelmed by numbers.  One can easily imagine when the police chief frustrates over the challenges of his small police detachment, with a few vehicles, handle unorganized thousands of drivers. 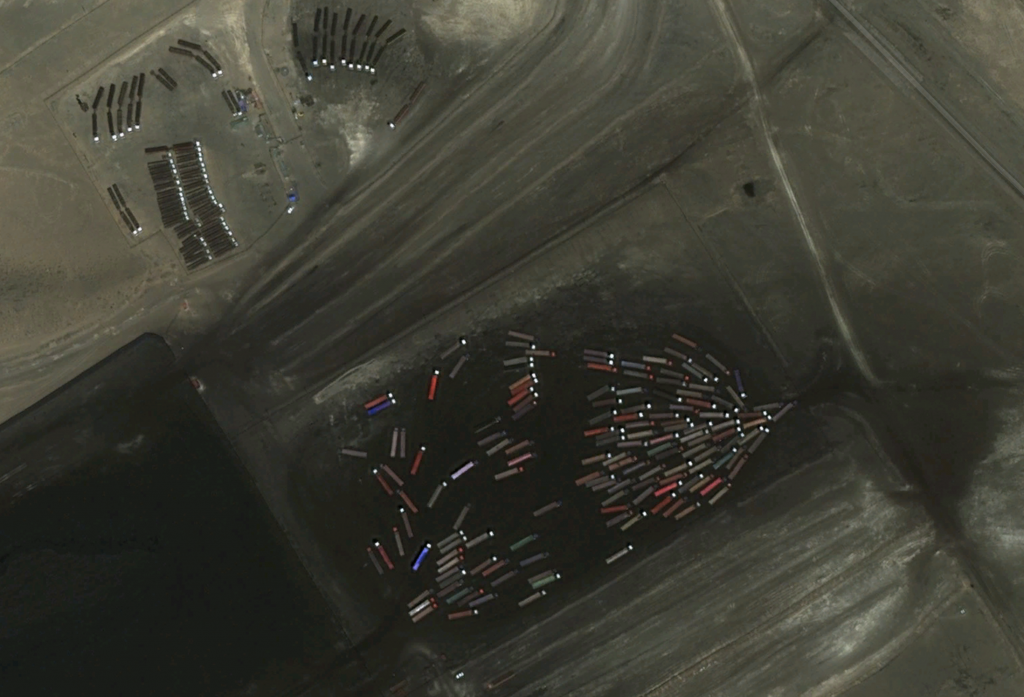 Just like mining companies, these drivers want to maximize their gains and to minimize their expenses. In addition to paying fees for truck owners, they try not to pay insurances (health, social, driver’s), to split his pay by having alternative drivers, and even not to pay road taxes. Some look for all possible opportunities to make money – smuggling (contraband) appears to be tempting choice.  But, this increases their risks of getting into accidents, paying enormous penalties to truck owners, and being charged by either Chinese or Mongolian authorities.

According to the authorities, there were 1500 traffic accidents and 8 deaths in 2016 and another 1000 accidents and 7 deaths in 2017.  By March 20, 2018, four people died because of traffic accidents.  Causes are multiple:  low visibility for driving during the dusty days and nights, poor road maintenance & markings, inexperienced, careless, or intoxicated drivers, and, tired drivers who had been at the wheels more than 8-10 hours per day. 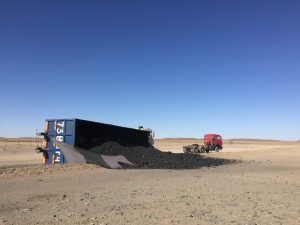 The most daunting problems, or disenfranchised labour rights – to have good work environment.  But, their basic sanitary needs have not been fulfilled.  No washrooms, showers, and rest-areas are on the Mongolian side along this 250 km route.  But, there is a well-regulated rest area on the Chinese-side, where drivers usually get refreshed.  Alcoholism, prostitution, and fighting are obvious problems among this mostly male community.  Without any effective enforcement of public laws, all three problems have been making the work environment for these drivers worse.  All doctors, local and private ones, in our interviews, highlight the prevalence of STDs among drivers and potential threat for the public health – as they become careers of different types of infectious disease.

Inside the cab of a coal truck. Truck June 24, 2018 Photo by Byambajav

The most logical solution is to build the railroad as soon as possible.  But, if the current political pattern continues, it is very unlikely to see that’s happening.  This leaves us three solutions.

Keeping the Status Quo – the informal economy prevails.  Hidden Chinese and Mongolian owners of coal trucks continue benefitting from the massive, environmentally unfriendly coal transportation while paying no taxes to the government.  Frustrated, stressed drivers remain disenfranchised while risking lives of their own as well as others.  Poorly represented, powerless public servants become the victims of the blame game. One could easily imagine abandoned war zone images along the 270 km roads – trashes, salvaged vehicles, abandoned empty camp grounds.  Certainly, politicians would pay visits prior to next election cycles (2020/2021) and government dignitaries continue to have their televised stop-overs while making false promises.

Closing down the coal transportation – one might try to enforce the rules by stopping the coal transportation by informal drivers.  But, it would present devastating ‘lose-lose’ scenarios.  Groups, whose informal cash flow have interrupted, would easily assert their influence over the government.  Drivers would easily force the Oyu Tolgoi and Tavan Tolgoi mines declare another force majeure as it happened when Chinese haulers protested in January 2018.  Since Tavan Tolgoi is becoming the most important honey pot for the government and politicians, the closure of the coal transportation solution appear to be costly.  But, it happened once briefly in the past.

Enforcing the Rule of Law  – appears to be the rationale solution even though there are many would like to keep the ‘Wild Wild West’ scenario.  First, the government needs to provide more resources for the government services along the coal transportation routes.  This means it should place more human resources – police, health, customs, and professional inspections, and emergency responders.  The government agencies improve its interoperability and data-sharing.  Second, the state-owned enterprises (Erdenes Tavan Tolgoi), whether like or not, must establish and enforce contracts with transportation companies – requiring these companies – to comply labour and health standards, to maintain their own camps, and to control trucks.  A simple solution such as requiring GPS in all coal trucks could easily reduce the traffic violations and queue jumping or even the police-(bribed) escorted queue jumping. Finally, the taxation officers and labour/health/transportation inspectors should increase their inspections and auditing on these transportation companies.  This will help the informal economy shrink and hold those owners accountable, responsible for these drivers.  It will require transparency and accountability from 120 companies with international transportation licenses (C and D) for coal transportation.

Even though all understand concerns of coal miners and exporters, private and state alike, to open more routes and ports for the coal transportation from Tavan Tolgoi to China.  For example, many suggesting to open the Khangi port, which is over 400 kms from Tavan Tolgoi.  But, if the government cannot properly run and control the 270 km coal transportation route, how can one be sure that the other route would be environmentally and socially responsible one?

Unlike artisanal mining operations, which is, indeed, difficult to control and enforce laws, the coal transportation business is less complicated to control when there is a political will to rule out the corruption and to enforce the laws, regulations, and standards.

Jargalsaikhan Mendee is a Deputy Director of the Institute for Defense Studies of Mongolia. He holds a PhD in Political Science from the University of British Columbia, and MAs in International Relations from the US Naval Postgraduate School and in Asia-Pacific Policy Studies from the Institute of Asian Research of the University of British Columbia.
View all posts by mendee →
This entry was posted in Corruption, Environment, Mining, Mining Governance, Tavan Tolgoi and tagged BYAMBAJAV Dalaibuyan, MENDEE Jargalsaikhan. Bookmark the permalink.