We want to briefly update our audience on the constitutional amendment in Mongolia since our last article Constitutional Amendments.

There are two draft proposals, one submitted by the 62 members of parliament on June 6, 2019, and a second draft proposal submitted by President Kh. Battulga on July 16, 2019. The Parliament of Mongolia has issued decree 72 which establishes a committee to synchronize these two drafts. There has been a large number of consultation sessions organized with various stakeholders, including political parties, civil society organizations, researchers, economists, and government organizations. This week the irregular session of the parliament has had the second reading of the draft proposal submitted by the 62 members of the parliament.

The President’s draft proposes to increase the number of Parliament members from 76 to 108. The draft did not have rationale as to why it proposes to increase it to specifically 108 but it says that the current number is significantly low especially given the geographic location, natural resources, and population growth. His draft also proposes to increase the number of years from 4 to 5,  a mixed electoral system, a prohibition of MPs with cabinet duties, except the Prime Minister. The President also proposed to have at minimum threshold of more than 50.001 people to create a political party in addition to other regulations on the political party.

The draft amendments are touching upon a few issues that have been challenging the political and economic stability in the last two decades. Those are: lack of clarity of the division of power and accountability of the parliament, cabinet, and presidency. Secondly, the uncertainty of independence and the accountability of the judiciary. Thirdly, more attempts to refine regulations around local settlements. The natural resources or mining developments is the pushing factor for many of these changes and challenges.

This amendment certainly differs from the previous two amendments as those amendments did not include any form of consultation at all. The active participation of civil society organizations, researchers, various political party representatives, and public figures are a sign of maturing democracy. The debates and discussions, however, seem not to have moved much beyond a “person-centered” perspective to a “content” focus.

There has been an extensive list of information available on websites and social media, both formal and informal.

Social media are reporting rich information through infographics, videos, expert debates, and discussion on the amendments.

The parliament’s website also archived and shared the videos of all discussions and their briefs in addition to the draft laws. 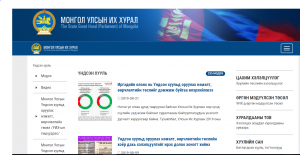 January, 2001 – Amendment to the Constitution, the same amendment that enables the MPs to serve in cabinet was passed here again by the Parliament among six other amendments. The previous amendment was vetoed and considered unconstitutional by the Constitution Court, thus the Mongolian People’s Republic Party (elected 72/76) submitted adopted the amendment later approved by the President.  These  7 amendments are called “degrading 7 amendments” and often debated that three of the seven was very essential changes and the other three were damaging and one was neutral. 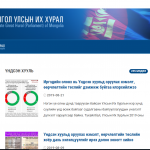