42.2% of all eligible voters are people younger than 35. Their participation rate has been low. As the National Statistics Office estimated, 50% of eligible voters aged between 18 and 25 did not vote in the 2016 parliamentary election. They will constitute about 15% of all voters this year. Many social initiatives were emerged this year to encourage youth participation. If they can increase youth turnout that can empower young and new candidates.

We could not access information on the number of eligible voters in each electoral district. So, we cross-checked several sources of information to get approximate estimations. The largest electoral districts are Bayangol and Chingeltei. Except the combined district of Bagakhangai, Baganuur and Nalaikh, all capital city districts have about 90-100,000 voters and 23-38 candidates are competing to win 2-3 mandates in each district.

The smallest electoral districts are Govi-Altai and Sukhbaatar aimags, but there are several districts with about 40,000 voters. 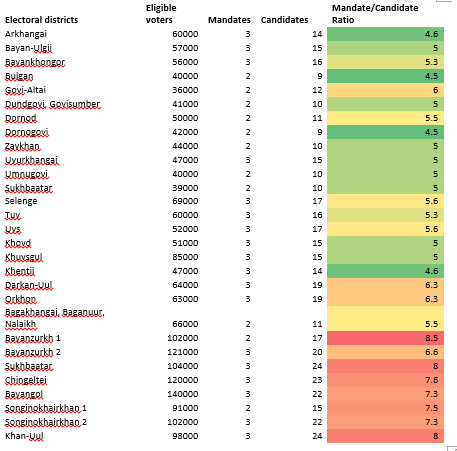 In 2008, a difference in the number of votes between candidates who ranked third and fourth was very slight in several electoral districts: just 5-260 votes. Note that manual counting was used at the time and vote-counting disputes in part led to the post-election riot on July 1. Though electronic vote counting machines have been used since 2012 tense vote-counting disputes can still occur because of tight win-or-lose results.

Here, we can see an important role that youth can have in election results. Let’s take an example. Khan-Uul district has about 100,000 voters. About 10% of them are voters aged between 18 and 22 and another 10% are voters older than 60. Though their share in the total number of eligible voters are same their turnout rate is very different. 97% of the voters older than 60 voted in the last parliamentary election while the other 10,000 voters barely reached 50% only. The difference is about 5000 votes, which can be a decisive in tight races like the ones mentioned above.

If we apply the GEC on eligible voters and NSO report on the 2016 voter turnout in understanding voter demographics in Khan-Uul district, we obtain the following rough estimations:

If the turnout of voters aged 18-34 increases by 10% this year that is about 4100 new voters in the example of Khan-Uul district.

Dr. Gerelt-Od Erdenebileg is a political scientist and the senior lecturer of political science at MNUE, Ulaanbaatar. I had managed Election project of UNDP, Mongolia and have been studying political party, electoral system, women’s participation and democratization in Mongolia since 2000.